Sanhedrin Issues Letter of Warning--"Don't Make Agreements With Pope." I Just Wish BiBi Feared G-d As Much As He Fears the EU!

We all know what the Nazi Pope wants. He wants Mount Zion. This is where they think their god will come back to life, and they are in a hurry to claim it so that the other xtian churches can’t get hold of it. Those churches should be as worried as we are!

Of course, no one wants to deal with the issue of the holiness of the site to us, our yeshivas and study halls there, the history we have there, and our own special heritage. Nope. No one wants to even discuss that it is the burial place of David HaMelech! 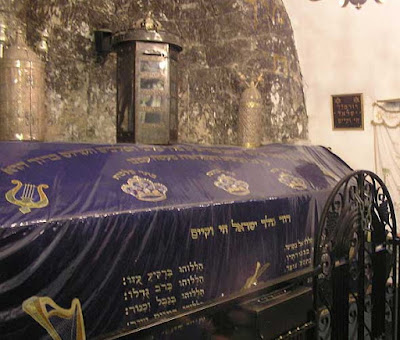 They want to “make peace” with the Nazi Pope like some wagging dog with our tail between our legs and our ears down prostrating ourselves before a bloated belligerent bully who has beat us with a stick so many times that we can’t remember the number.

When moslems or xtians control a site—even other moslems and xtians can’t go there—let alone Jews! Just look at what goes on in the Church of the Nativity! They are so busy fighting among themselves that they can’t even move a ladder!

Do you think the ROMAN catholic church would be any better? Hello! They still have the name of those pagan destroyers of our Holy Temple as part of their official title!! (Perhaps they are STILL PROUD of the Romans???)

Seriously, Israel is our land and they are welcome to come visit, but they definitely DON’T need to stay for the next millennia or more. Do you think the catholic church would be willing to give anything up to us if we went to demand, say, a seven-branched candelabra, some vestments, and a few trumpets from the Vatican?

The Nazi Pope is making sweet right now, but remember what he did with that bishop. Remember how he wants to make the Holocaust Pope into a Saint. Remember that he wants to make saints of the murderous Ferdinand and Isabella. We don't have to ask how he feels about Jews, he shows us daily! He says one thing and does another, and he is the big Kahoona of catholicism. There has to be a reason he has that job, and it isn’t because he loves and respects Jews.

M
-----
Warning Issued Not to Sign With Vatican
http://www.israelnationalnews.com/News/News.aspx/130676
by Hillel Fendel

(IsraelNN.com) Pope Benedictus XVI is scheduled to arrive in Israel six weeks from now, and concern is growing over possibly irreversible Israeli concessions to the Church.

For more than ten years, Israel and the Vatican have been negotiating a diplomatic agreement regarding their tax dispute over Catholic Church properties in Israel, as well as other issues over which they disagree. Though public details are sparse to nil, Foreign Ministry officials say major progress has been made – leading many to fear that the Church will be granted a political and religious foothold in the Holy Land.

Though Church officials hope the agreement will be completed before the Pope’s arrival in May, this is not certain. Israeli Foreign Ministry’s Bahij Mansour, who heads its religious affairs section, said two weeks ago, "We are 85-90% there.”

Mansour also said that most issues still in dispute would be resolved in a meeting in April. Dr. Daisy Stern, who has researched and publicized the entire topic extensively, says that varying Italian reports say the meeting will take place either April 7 or April 23 - before and after Passover, respectively - and is to involve relatively high-level officials from both the Vatican and Israel’s Foreign Ministry. (Please hear the interview about this topic between Tamir Yona and Daisy Stern)

The Sanhedrin, a body of 71 rabbis that is attempting to renew the ancient tradition of Judaism’s most authoritative court, has written a public letter to Israel’s leading officials, warning that any agreement regarding the transfer of national, historic, and/or religious Jewish assets to the Catholic Church will be null and void and will not be recognized by Jewish authorities.

Striving for Internationalized Jerusalem
In February 2000, the Vatican and the Palestinian Authority signed an agreement calling for an internationally guaranteed special status for Jerusalem. During his visit that year, Pope John Paul II announced in Bethlehem that the Vatican had always recognized “Palestinian national rights to a homeland.” Rabbi Shlomo Aviner, Dean of Yeshivat Ateret Cohanim, said at the time that the Pope's goal was simply to obtain a foothold in Jerusalem for the Church.

The Sanhedrin, which sees itself as a “vehicle to bring about Jewish unity and civil justice, to help repair some of the deepest rifts in our society, and to provide an active, exemplary and unified Torah leadership,” warns President Shimon Peres and incoming Prime Minister Binyamin Netanyahu against the Church’s religious agenda hiding behind diplomatic agreements.

The State of Israel grants freedom of worship to every religion – except to Jews on their most sacred spot, the Temple Mount. They do not have the right to pray there, nor even minimal religious rights. The State thus contravenes the purpose for which it exists, and undermines its own foundations.

On the other hand, the State of Israel goes out of its way to transfer diplomatic, religious and spiritual assets to foreigners.

Over the course of many years, contacts have been underway and promises of various agreements have been made regarding what the Catholic Church sees as its property or wishes were its property, in Mt. Zion, the Old City of Jerusalem, the Sea of Galilee, and elsewhere. There are those who came up with the idea of the Holy Crescent [an area around the Old City to the north and east, newly known as the Holy Crescent - ed.] -- the main purpose of which is to rid the Temple Mount and the Old City of exclusive Jewish sovereignty.

The Goal: Sever Jerusalem from Jewish People
Ever since the Israeli army liberated the entire city of Jerusalem in 1967, the members of other faiths and nations have not accepted the Jewish People’s sovereignty and return to its eternal capital, the place in which its Temple for the G-d of Israel and G-d’s kingdom will be established.

In recent years, the Vatican – acting on behalf of Catholic theology – signed a series of secret agreements, behind the public’s back, with various elements in the State of Israel, bereft of respect for the spiritual and political essence of the Jewish Nation. The essence of these agreements is the transfer of ownership over national Jewish property in Jerusalem to the hands of foreigners, and the instigation of processes to destabilize the Jewish People’s ownership over its sacred sites – primarily, the Temple Mount, the Western Wall, and the entire Old City of Jerusalem.

Giving these and other sites to the Vatican and international elements will lead to their detachment from the State’s territorial area.

The State of Israel is bound to the document of acquisition [known as] the Bible, which was the basis for the Jewish People’s claim to its Land when it established the State of Israel. The State must therefore actualize Jewish sovereignty in Jerusalem, the City of G-d, the city of kingship, the capital of Israel, the heart of the world. It must guarantee the right of worship for Jews on the Temple Mount…

Standing Up For Israel's Honor
It should be noted that in 1964, when Pope Paul VI visited Israel, the third President of Israel, Mr. Zalman Shazar, read to him the verse in Micah stating that though other nations might follow other gods, “we will walk in the Name of our L-rd G-d forever.” The Chief Rabbis at the time similarly stood up for Israel’s honor by refusing to meet with him at all, after he refused to meet with them in their Jerusalem office. [During his visit, Paul VI did not acknowledge Israel’s existence or visit its key sites, did not mention its name, and refused to meet with the Chief Rabbi in Jerusalem. He later addressed a thank you note to the Israeli president, who lived in Jerusalem, by writing, “Mr. Salman Shazar of Tel Aviv.” - ed.]

Public Opposition Worked
In 2000, when Pope John Paul II visited Jerusalem, various elements tried to promote foreign sovereignty on the Temple Mount at the expense of Israel’s sovereignty there. They attempted to enable the visit to the Jews’ holiest site in the world without official Israeli presence - but public opposition thwarted these efforts.

All official and religious elements in Israel must prevent the signing of an agreement that deviates from the spirit of this document, and express their objections to the Catholic restorationist tendencies whose goal are the neutralization of Israel’s sovereign powers and the Jewish People’s status in its Holy Land, the Land of Israel.

We expect you to show maximum alertness to the matter of Jerusalem as the holiday of Passover approaches, so that our right hand not be forgotten… Please, clarify your positions to your countrymen and the entire world. Show honor to the G-d of your forefathers, your city, and your nation, without flattery to foreigners who wish to minimize our national image…

The Sanhedrin asserts that the representatives of the State of Israel can represent the Jewish Nation as long as they act in accordance with its traditions and laws – and are not authorized to transfer the ownership, or authority over, lands and properties in the Land of Israel to any foreign religious or political element.

Agreement Will Be Null and Void
Therefore, any agreements made by such representatives with the Vatican as a theological political body, in opposition to the spiritual essence of the Nation of Israel, have no validity. They are all null and void, the Vatican should not believe that property promised to them by these contracts will remain in its hands.

Churches in Israel - The Result of Forced Exile
It should be remembered that the Vatican, as the leading Christian Church, is responsible for the legacy of Rome – the conqueror of Jerusalem, the exiler of its Jews, the destroyer of its land. All the churches that exists today in the Land of Israel are the result of the Jewish destruction 1,900 years ago, the elimination of the Jews from their land, and the exile that Christianity wishes to boast will be eternal. This, in addition to the priceless material and spiritual treasures found in the basements of the Vatican [such as the utensils of the destroyed Holy Temple - ed.], as well as the countless synagogues throughout the world that were confiscated by the Vatican and its representatives and not returned.

It is gravely forbidden to validate such agreements, as determined by the State’s criminal law code.

Warning: Religious War
Continued flattery to the Church on the basis of illegal agreements is liable to end, Heaven forbid, in destructive religious wars all over the globe.

Former Chief Rabbi Yisrael Meir Lau has said that Pope Pius XII refused several requests by then-Chief Rabbi Isaac Herzog to meet with him before and during the Holocaust to discuss how the Church could help save Jewish lives. After the war, too, Chief Rabbi Herzog asked for the Pope's assistance in locating Jewish orphans who were cared for by Catholic families, and again, the Pope refused.
Posted by Unknown at 3:13 AM