Israel Wins Against Sweden! Davis Cup Win On the Court--and Off!! 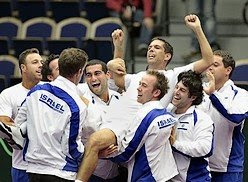 Israel advanced to the Davis Cup quarterfinals for the first time since 1987 after rallying to beat seven-time champion Sweden 3-2 Sunday in a close series overshadowed by political protests.

Vinciguerra saved two match points but botched a forehand to lose his serve and the final set. The jubilant Israeli team ran out on the court and hoisted Levy in the air.

In the previous match, Sela got so upset when he lost the third set he cracked his racket against the indoor carpet. The burst of anger appeared to have energized the Israeli, who broke Johansson's serve in the first game of the fourth.

Meanwhile, Johansson, playing his second match since October following heel surgery, was showing signs of fatigue. He struggled with unforced errors and lost the set when his backhand return went wide.

"I knew I had to play long points and keep him on the court as long as possible. I think it paid off," Sela said.

Johansson admitted he lost steam in the fourth set.

"When your body stops there is not much you can do," the 2002 Australian Open champion said. "It's just agony to stay out there. You know that if he doesn't break his leg there is no chance."

Johansson could not longer put up a fight in the final set, allowing Sela to break his serve twice and go 4-0 up to the delight of a small group of Israeli special guests.

Sela lost four match points before the Swede botched a return to give Israel the victory.

With the score tied at 1-1 after two marathon singles on Friday, Simon Aspelin and Robert Lindstedt put Sweden ahead in the doubles Saturday by defeating Andy Ram and Amir Hadad in four sets.

In the opening singles, Johansson beat Levy in five sets before Sela leveled the series with a five-set victory over Vinciguerra.

Only about 300 special invitees were allowed to watch the match because city officials said they couldn't guarantee security at the venue. Critics, including the Israeli team, said Malmo was caving in to threats of violence from anti-Israel groups.

On Saturday, scores of rock-throwing protesters bent on stopping the match clashed with police in an attempt to storm the arena. Police apprehended nearly 100 people and arrested 10 of them on preliminary charges of rioting and assault. No injuries were reported.

Two officers pulled their weapons but no shots were fired in the melee, Malmo police said.
Posted by Unknown at 6:45 AM