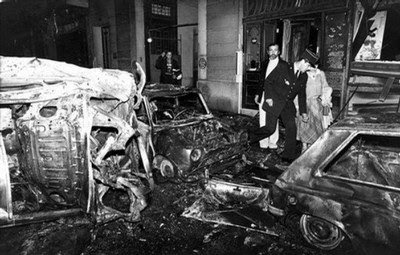 I don't think it is a normal course of action in Canada for those accused of mass murder to be released on bail, but maybe I'm wrong . . .

I guess that, just as long as you have a good education, you can bomb a synagogue.

Too bad he wasn’t a brick-layer or something, right? Then, I’m sure, he would have to rot in jail where he belongs.

I guess the judge forgot that these aren't just "four victims" who were killed, they were living, breathing human beings with a past, a present, a beautiful future. They had families who loved them. They spent years getting an education, making a career, building their lives, and struggling to help themselves and others.

Then, they were murdered by a stupid arab terrorist.

One Israeli Jew and three Non-Jewish French citizens were murdered on the evening of Shabbat Simcha Torah, the confluence of two of the happiest days in the Jewish calendar. Shabbat, our day of rest; and Simcha Torah, a happy, beautiful, and significant holiday when we celebrate G-d giving us the Torah.

The blast, although it killed four and injured 22, was somewhat of a miracle. If the blast had happened only a few seconds later, hundreds of people might have been killed. The bomb went off early. Most of the people in the synagogue hadn't had a chance to get out the doors.

Still, this miracle does not minimize the pain of the loss of those who were lost on that terrible evening in Paris. Even one life lost is a terrible tragedy, and the loss of four lives is incomprehensible.

The commemorative plaque affixed to the synagogue reads "In memory of Jean Michel Barbé, Philippe Bouissou, Hilario Lopez Fernandez, Aliza Shagra killed in the heinous attack against the synagogue on 3 October 1980.

His words set off a firestorm of controversy in France because he was inferring that the Jews were, somehow, OK to target because they were "guilty" of being Jewish, while it was not OK to attack "innocent" French citizens. Thousands of people protested, both against the attack and against Barre's words.

Aliza Shagrir, 42--an Israeli cinematographer, was walking past the synagogue with her 15-year-old son, Haggai, who today works at the Foreign Ministry. Her other son, Oron, is currently a university professor. Her husband, the Austrian-born Micha Shagrir, 69, established the Aliza Shagrir Fund prize for outstanding documentaries in her name. Micha Shagrir is a well-known television, film and documentary producer who lives in Jerusalem and has never remarried. He was appointed board chairman of Jerusalem's Khan Theater last year, and is a former director of the Sam Spiegel Film School and the Israel Film Foundation.

I hope that the families these four innocent victims of this arab terror, and those who were injured in the attack, do not go without justice because Canada has decided to be "politically correct."

A Canadian-Lebanese man held for allegedly killing four people and injuring 40 in the 1980 bombing of a Paris synagogue has been ordered to be released on bail ahead of his extradition hearing.

Judge Robert Maranger set "very, very strict conditions" on Hassan Diab including that he remain in the home he shares with his partner in Ottawa, and wear an electronic tag.

Diab, a part-time university sociology professor, can only leave the house with one of five people who pledged to guarantee his good conduct and has to abide by a curfew, the judge said. His guarantors posted a 290,000-dollar bond.

Diab, 55, was arrested in November in an Ottawa suburb at the request of French authorities. He is wanted by France on charges of murder, attempted murder and the destruction of property after the 1980 bombing.

Prosecutors had argued during the bail hearing that Diab posed a flight risk as it was alleged he had previously traveled on false passports.

But the defense countered Diab had not sought to flee from arrest, even though he had known for a year, thanks to an article in a French daily, that he was being sought in the case.

In October 1980, a bomb planted in a motorcycle saddlebag outside the Copernicus Street synagogue in Paris killed three Frenchmen and a young Israeli woman, injuring dozens.

It was the first fatal attack against the French Jewish community since the Nazi occupation of World War II.

French authorities issued a warrant in November 2007 for Diab's arrest, following a lead from German intelligence saying he was involved.

In his bail decision, judge Maranger characterized the strength of the case against him was "moderate to high."

He noted Diab's "transient lifestyle," having lived in six other countries in the past 12 years, and his tendency to "not be drawn to long-term commitment."

The prosecution had argued several of his bail guarantors barely know him and Diab had proven himself capable of deceiving his partner by cheating on her behind her back.

Maranger, however, concluded: "I do not believe detention is necessary to maintain confidence in the administration of justice" in this case.
Posted by Unknown at 2:54 PM