Good riddance. The only sadness is that a little girl grows up without her mother and without her father. I am thankful she will be raised by responsible relatives, and, G-d willing, will grow up with good people, with a fear of Hashm, and with love in her heart. 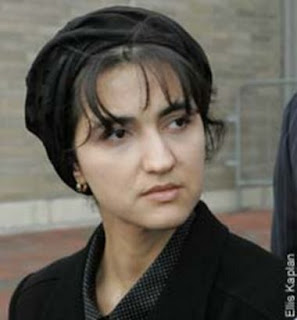 They married 40 days after they met - but passionate love soon turned to blinding hatred.

Like characters in a Russian novel, Mazoltuv Borukhova and her estranged husband, Daniel Malakov, went at each other like snarling dogs.

They battled fiercely over who would care for their young daughter, Michelle. The cold and calculating Borukhova, 35, a doctor, was granted custody first.

But Malakov, 34, a dentist, protested that she wasn't allowing him proper visitation, and on Oct. 3, 2007, a judge granted him temporary custody of the 4-year-old child - a decision that sealed his doom, prosecutors would later say.

On Oct. 22 of that year, a video captured a kicking and screaming Michelle being turned over to her dad in a vicious tug of war. Six days later, the father was shot dead - the victim of a hit man's bullets. 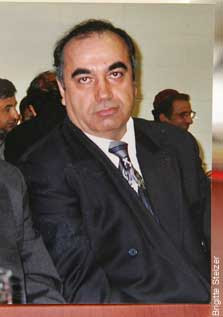 Yesterday in Queens Supreme Court, Borukhova was convicted of paying $20,000 to Mikhail Mallayev, 51, a relative by marriage, to rub out Malakov as their daughter watched in horror.

The verdict was announced in a hushed and packed courtroom after only six hours of jury deliberations.

Borukhova didn't smile. She didn't blink. She didn't grimace. Her face was stone cold - devoid of even a hint of expression - as she turned and spoke briefly to her lawyer, Stephen Scaring.

Then she was cuffed and led away.

She and Mallayev could spend the rest of their lives in prison with no hope of parole.

Outside the courtroom, Malakov's brother, Gabriel, screamed into a cellphone, "GUIIIILLLTY!" stretching out the word.

Members of the jury of six men and six women said Borukhova was convicted by her own testimony on the witness stand.

"She didn't know how to explain herself. Everything she said didn't come close to the truth. And it wasn't consistent with the evidence," said one juror, Oscarina Aguirre, 25.

Another juror, who asked that her name be withheld, agreed, saying, "There was nothing believable that she said at all. It just didn't make sense."

In 2001, when Borukhova's sister, Natella, introduced her to Malakov, it seemed like a perfect match. Their families lived blocks apart in Forest Hills, part of the tight-knit community of Bukharan Jews from the former Soviet republic of Uzbekistan.

The young doctors were members of a bright new generation in the insular neighborhood, the pride of their clans.

Borukhova, an internist at Bronx and Westchester hospitals, had come to the United States in 1997 from Samarkand.

Malakov's family had emigrated in 1991 from Tashkent, the capital city, where his father was a doctor and his mom a nurse.

Malakov attended York College in Queens, then went to New York University's dental school on a scholarship. He specialized in orthodontics at Columbia University.

After a whirlwind courtship, the couple was married on Nov. 30, 2001. Michelle was born the next year.

Then everything began to change.

Borukhova claimed her handsome young husband, so adored by his family and his patients, was a different man at home - abusive to her and the baby.

When Michelle was just 9 months old, the mom bolted from the marriage.

"He physically abused me," she claimed in Queens Family Court. "And he said in order for me to stay with him, I would have to clean the house with my tongue."

After 11 months, Borukhova and Michelle moved back in with Malakov in 2004, but it didn't last.

Borukhova claimed she witnessed her husband sexually abusing her daughter, a claim that was never substantiated.

"Everybody says he was gentle and charming and helped patients, but when he used to come home, he was a totally different person," she said.

Malakov's father, Khaika, said Borukhova was to blame. He claimed she kicked his son out into the snow after one fight.

Another time, he said, "I wanted to kiss my granddaughter and she said, 'Don't touch her.' And I said, 'Why not? Why are you insulting me?' She started a whole fight. There were many fights like this - over nothing."

In April 2005, Malakov filed for divorce.

She got custody, with the dad getting supervised visitation rights. But Michelle's law guardian, Daniel Schnall, claimed that Borukhova interfered each time Malakov saw his daughter, preventing him from developing a relationship with the girl.

Schnall applied to the court for Malakov to get unsupervised visits. On Oct. 3, Queens Supreme Court Justice Sidney Strauss surprised everyone and awarded temporary custody to Malakov.

On Oct. 22, Borukhova turned Michelle over to her father. To show the little girl's distress, she hired a cameraman to videotape the hand-over. The nearly hourlong video, played at Borukhova's murder trial, begins with the mother and daughter reading and playing.

"Nobody will do anything to you," Borukhova says. "You're going to stay there a few days and I will take you back."

The girl throws herself on the floor, screaming, "I want you."

As Michelle cries, the coldhearted Borukhova turns to the cameraman to make sure the sound is being recorded.

She then picks up Michelle and carries her to the home of Malakov's father.

At the home, there is an ugly tug of war between Borukhova and her ex.

She holds the girl around her legs and won't let go. He grabs the child under the arms. After a struggle, Borukhova finally lets go. Six days later, Malakov brought Michelle to a Forest Hills playground for a visit with her mother. Suddenly, a heavy-set man - Mallayev - appeared out of nowhere, carrying a gun with a silencer fashioned from a bleach bottle covered with duct tape.

He fired one shot, which hit Malakov in the chest - and blew off the bottom of the silencer. A stunned Malakov turned to see who had shot him - and took another bullet in the chest.

Borukhova suddenly ran up and began performing CPR on her victim.

Mallayev, who lived in an Atlanta suburb, was arrested a few weeks later in Georgia after NYPD cops matched fingerprints on the duct tape.

Borukhova was arrested in February 2008 after a Queens grand jury indicted her on murder and conspiracy charges.

Public-school teacher Cheryl Springsteen was the star witness at the trial, which began Feb. 4. Springsteen said she had been walking her dog, Molly, past the playground on the day of the killing when Michelle toddled up and started swatting the dog's tail.

There was a bang.

"It was loud. It got my attention. I thought it was a firework," she said. "I turned my entire body [toward the sound]. I saw a man with his right arm extended with a gun in his hand."

She said she stared at the man's face for 60 to 90 seconds so she would be able to tell cops what he looked like.

She identified the man as Mallayev, saying it was a face she'll never forget.

"I have nightmares about it frequently," she said. Assistant District Attorney Brad Levanthal claimed Borukhova paid Mallayev $20,000 to rub out her husband so she could have complete custody of her daughter.

Mallayev, a builder, needed the money because he was $2.5 million in debt, the prosecutor charged, adding that he and Borukhova exchanged 65 phone calls in the days before the shooting. Taking the witness stand in her own defense, Borukhova testified, incredibly, that she didn't hear or see a thing when her husband was gunned down - even though he was standing less than 10 feet from her and the silencer failed.

Her testimony prompted Levanthal to slam his hand down on the jury box three times and demand, "Did you hear that?"

"Are you telling the jurors that you were standing closer to Daniel than where I am and you didn't hear a single gunshot?" he asked. "I didn't hear," she replied in a voice devoid of emotion.

Borukhova testified the first inkling she had that something was wrong was the pained expression on Malakov's face.

But she insisted she never saw Mallayev at the scene. In his closing argument, Scaring said that if Borukhova was a liar, she would have done a better job of it than saying she didn't hear or see anything.

"It's the strongest evidence of her truthfulness, because if she was a liar, she would say something that makes more sense," he said. In his closing argument, Levanthal said Borukhova's sister, Sofia, and not the doctor, picked up Michelle outside the Forest Hills playground. Borukhova was late, he said, because she had picked up a spy camera to place on her coat and was having trouble making it work.

He also claimed the defendant said she heard nothing because she knew Mallayev was going to use a silencer. The jury decided Borukhova was, indeed, a liar.

After six hours of deliberations over two days, the panel convicted her and Mallayev of first-degree murder and second-degree conspiracy. Mallayev was also found guilty of weapons possession.

Jurors Rita Bryant and Vanessa Rivera-Serrano wept, the latter saying afterward, "There's a part of me that knows how Malakov's family is suffering."

The female juror who asked to remain anonymous told The Post, "I feel like justice was done. I felt it was a cut-and-dry case.

"When she said she didn't see anything or hear anything, and yet she was less than 10 feet away, that speaks for [it]self."

Asked if there was any panel member who initially believed either defendant was innocent, she said, "I don't think anyone thought they didn't do it."

Scaring said he was "surprised" by the verdict and plans to appeal.

Malakov's 69-year-old father, Khaika, said sadly, "I waited a long time and justice has been done. God bless the jury. Only God knows now what should happen. I don't care about [Borukhova's] life anymore. Her life is done. My son's life is already done.

"Now it's very important how [Michelle] grows up. It's important she grows up with responsible people."

Additional reporting by Tim Perone and Joseph Mollica
Posted by Unknown at 5:23 AM