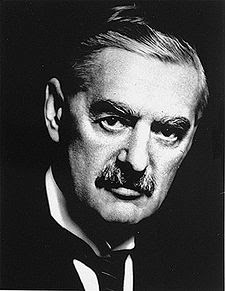 Yeah, yeah. I know. The British helped fight the Nazis.

Let it be know, the British helped fight the Nazis only AFTER buying them off with the blood of the residents of the Sudetenland region of Czechoslovakia (and her Jews), then, of course, the blood of Eastern Europe (and her Jews) when Hilter didn't stop there. Chamberlain's policies of "appeasement" and "containment" didn’t work to appease and contain Hilter's hunger for power, and it won't work to keep the arab Nazis appeased or contained either.

In fact, the case can be made (and has often been made) that Chamberlain's "land for peace" deal only made Hitler hungrier and MORE ambitious to conquer the world.

Of course, the British didn't really care one lick about Eastern Europe just as long as they were safe on their little island. It wasn't until Hilter started to threaten WESTERN Europe that Chamberlain had to finally resign in disgrace and England rallied to the cause of fighting Hitler.

Now, the British are trying hard to push Chamberlain's failed policies on Israel. Why not? After all, if appeasement was almost dumb enough for them to lose England, it should be dumb enough for us to lose Israel, right?

All they have to do is get Netanyahu (whose policies are frighteningly similar to that of Nevil Chamberlain) to agree to keep ceading land to the arab Nazis, and England will have the fullfillment of their dream--no Jews!

Getting rid of our last line of defense--the strong, good, and morally righteous residents of Samaria and Judea-- is the best way to get Israel to cease to exist.

That is why the arabs (and England) are all in favor of it, of course!

(IsraelNN.com) The British embassy in Tel Aviv has joined a wider European trend of boycotting Jewish towns in Judea and Samaria. Embassy officials announced Wednesday that they had canceled a planned relocation after discovering that the owner of their intended new office was involved in construction projects in Judea and Samaria.

The intended new location was the Kirya tower in Tel Aviv, which is partly owned by Africa-Israel. The owner of Africa-Israel, Lev Levayev, also owns a subsidiary company that has built homes in Har Homa, Maaleh Adumim and Matityahu East.

All three towns are located in “settlement blocs,” or large concentrations of Israeli neighborhoods located near the 1949 armistice line. Polls show that most Jewish Israelis support maintaining Israeli sovereignty over “settlement blocs” under any future peace deal with the Palestinian Authority, and the Israeli government sees construction in those towns as legitimate.

British embassy officials said the deal was canceled before any leases were signed. Africa-Israel's ties to construction projects in Jewish cities in Judea and Samaria were “part of the reason” for the move, officials said.

The decision to cancel the move does not represent a change in British policy, but rather a more active approach, said embassy spokeswoman Karen Kaufman. “The UK government has always regarded settlements as illegal, but what has happened in recent months is that we are looking for ways to make a difference on this issue,” she explained.

British officials were pressured by several groups opposed to the presence of Jews in Judea and Samaria to reject the move to the Kirya tower. Among the groups were branches of the Israeli-Arab group Adalah and representatives of the Palestinian Authority towns of Bilin and Jayous.
Posted by Unknown at 1:23 PM