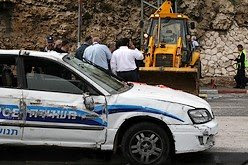 This is a deranged man who has specifically chosen to attack innocent civilians for the crime of simply being Jewish and daring to live in our own G-d given land.

Instead of the normal response of someone seeing such a tragedy, Hamas looks to twist it into some sort of bazaar political statement about the Gaza war saying it is a "natural reaction"????

So, what Hamas is saying, essentially, is this: "We are sorry. We are arabs and have no ability to function as moral, ethical human beings. We have no intellect above what is given to all animals, and we cannot be expected to exist within the framework of a civilized society."

I'm sorry, I don't believe that. I believe that they used to have one of the most enlightened societies on the planet with scholars and artists and poets. I believe they have turned away from creation and have decided to sow destruction instead.

This is a decision, made with an expressed purpose to hate, to kill, to maim others.

We cannot make peace with people who have made this decision, and they should have no standing with other civilized nations or peoples. Our politicians and those of the world should be ashamed to have anything to do with them, to speak to them, to honor them in any way.

A Jerusalem Arab rammed a bulldozer into a police car, slamming it into a bus, on a highway near the capital's Malha shopping mall on Thursday, lightly wounding two officers before he was shot dead, in the latest in a string of attacks using vehicles to run down civilian targets in the city.

Terrorist rams tractor into police car, aims for bus
Witnesses described a yellow front loader bulldozer speeding along the Menachem Begin Highway at its junction with Rehov Golomb shortly after 11 a.m., dragging the police car, flipping it into the air and trying to crush it with its front shovel.

The attacker - later identified as Mar'i al-Rdaidah, 26, from the capital's northeastern Beit Hanina neighborhood - reached the intersection near Teddy Stadium and managed to push the police patrol car for about 30 meters, police said. He pushed the police vehicle into the bus, but his momentum was apparently stopped by the bus and an electrical post pinned between the police car and the bus.

The bus was full of girls dressed in Purim costumes en route to cheer up patients at Hadassah hospital, according to the Zaka rescue and recovery service.

"The girls were hysterical. They saw the enormous shovel heading toward them and saw death approaching, but they were saved at the last minute by the post. It's a Purim miracle," Zaka operations commander Haim Weinrot said.

A number of bystanders suffering from shock were treated at the scene by MDA teams.

Policeman Eldad Bin-Nun, who helped stop the terrorist, gave Channel 10 his account of the incident.

"We were in the area by chance and were waiting at a red light when we noticed the bulldozer in the opposite lane, to our left, trying to slam the police car into the bus," Bin-Nun said.

"We stopped the police car and I ran toward the bulldozer, firing several shots at the driver from the vehicle's left side until he slumped to the right. I then ran to the bulldozer's other side and noticed [the terrorist] was trying to sit up, so I fired at him again. Several moments later another policeman arrived, and he fired three more shots at the driver with an M-16 rifle," Bin-Nun said.

"I saw the police car fly into the air. He flipped it over twice, then continued dragging it toward a bus that was stuck in traffic," he said.

Ma'atabi said he had also fired at the terrorist with his own handgun.

The two injured policemen exited their damaged vehicle and also fired at the bulldozer driver.

Rdaidah drove the construction vehicle unhindered through the city to the scene of the attack, Channel 2 reported.

According to the report, Rdaidah, who lived on the Palestinian side of Beit Hanina and did not have an Israeli ID card, was the owner of the vehicle, unlike in the two previous bulldozer rampages in Jerusalem last year.

Police, Magen David Adom and Zaka personnel streamed to the scene within minutes.

The terrorist was pronounced dead at Hadassah-University Medical Center in Jerusalem's Ein Kerem neighborhood, despite attempts by a Magen David Adom ambulance crew to resuscitate him.

"This is a natural response to the home demolition in east Jerusalem and to the Israeli aggressiveness in the Gaza Strip," Reuters quoted him as saying.

"Israel is responsible for hurting Palestinians in east Jerusalem and for the mass murder in Gaza," he said.

Within half an hour of the attack, Jerusalem Mayor Nir Barkat was on the scene.

"The attacker targeted us for no reason other than the fact that we live in Jerusalem. This was an attack carried out exclusively for the purpose of harming civilians," he said.

Barkat said he expected the government to approve harsher punishment for terrorists.

"The policy toward those who want to hurt us should combine strict punishment to create effective deterrence, quickly neutralizing the attackers, and returning to our routine lives as soon a possible following an attack," the mayor said.

Barkat gave the two policemen and the civilian who helped kill the terrorists the Lion Pin, bearing the city's emblem, and thanked them for their heroism.

"Everyone involved in the attack" would be brought to justice, Barkat vowed.

The attack is the fourth of its kind in the capital in eight months.

• On July 2, Husam Taysir Dwayat, 30, a resident of the southeast neighborhood of Sur Bahir, used his bulldozer to kill three people and wound at least 30, first on Rehov Sarei Yisrael and then on Jaffa Road, overturning a No. 13 Egged bus and flattening half a dozen cars near the Mahaneh Yehuda market before he himself was killed. The dead victims were Bat-Sheva Unterman, Elizabeth Goren-Friedman and Jean Raloy.

• On July 22, Ghassan Abu Tir, 22, from the east Jerusalem neighborhood of Umm Tuba, used this bulldozer for an attack on the capital's King David Street, repeatedly crashing his vehicle into a No. 13 Egged bus near the King David Hotel and then ramming into five cars, one of which he overturned, before being shot dead by a motorist. He wounded 15 people.

• On September 22, Kassem Mughrabi, 18, from east Jerusalem's Jebl Mukaber neighborhood, rammed a black BMW car into a group of pedestrians at Kikar Tzahal, near Jaffa Gate. He wounded 19 people before being shot dead by an off-duty IDF lieutenant.

Jerusalem District deputy police chief Nisso Shaham said at the scene of Thursday's attack that, following the previous attacks in the capital, police had compiled a list of bulldozer drivers and owners in the city in order to identify possible attackers. But, he said, "this kind of attack cannot be anticipated and therefore it is impossible to prepare for it."

Rebecca Anna Stoil, Jerusalem Post staff and AP contributed to this report.
Posted by Unknown at 2:04 AM