ADL AWAKES! Complain about NYT Cartoon. Where were they when the Post did this??? 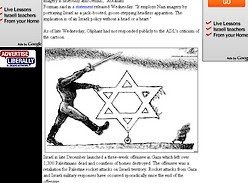 And where was the ADL when the last cartoon, depicting Bernie Madoff as a devil was published just a week ago in the New York Post?

I guess the ADL doesn’t read any right-leaning papers?

That Madoff cartoon was the prequel to this. One cartoonist got away with it, so the next decides to push the envelope.

Maybe next week the cartoonists will just come right out and blame the Jewish people for the entire economic situation so that all the people who want to kill us have a reason to do so.

The Anti-Defamation League (ADL) on Thursday labeled a syndicated cartoon by Pat Oliphant that appeared across the US and on the Internet as "hideously anti-Semitic" because of its use of "Nazi-like imagery and hateful evocation of the Jewish Star of David."

The cartoon portrays a headless, jack-booted figure marching in a goose step with a sword in one hand and pushing a Star of David on a wheel with the other. The Jewish Star has fangs and is chasing after a woman carrying a child, labeled "Gaza."

Abraham H. Foxman, ADL National Director, said following the publication of the cartoon: "Pat Oliphant's outlandish and offensive use of the Star of David in combination with Nazi-like imagery is hideously anti-Semitic. It employs Nazi imagery by portraying Israel as a jack-booted, goose-stepping headless apparition. The implication is of an Israeli policy without a head or a heart.

"Israel's defensive military operation to protect the lives of its men, women and children who are being continuously bombarded by Hamas rocket attacks has been turned on its head to show the victims as heartless, headless aggressors."

The Simon Wiesenthal Center also denounced that cartoon, which, it said, "mimics the poison of Nazi and Soviet propaganda."

The center urged www.nytimes.com and other websites to remove the cartoon.

"There is nothing about Oliphant's cartoon not meant to denigrate and demonize the Jewish state, from the headless goose-stepping soldier to the horrific depiction of the Star of David about to devour a cowering innocent Gazan woman holding a baby," said Rabbi Marvin Hier, SWC dean and Rabbi Abraham Cooper, SWC associate dean.

"The imagery in this cartoon mimics the venomous anti-Semitic propaganda of the Nazi and Soviet eras. It is cartoons like this that inspired millions of people to hate in the 1930's and help set the stage for the Nazi genocide," Hier and Cooper added.

Oliphant's cartoon is his latest to draw backlash.

In 2001 and 2007, the Asian American Journalists Association objected to what they called offensive racial caricatures in cartoons about trade with China and concerns about international food safety.

In 2005, the American-Arab Anti-Discrimination Committee criticized one of his cartoons because it drew on false stereotypes and reinforces negative views of Arabs.

Oliphant came to the US in 1964 to work for The Denver Post. His work has been syndicated internationally since 1965, and by Universal since 1980. His work is on permanent display at the Library of Congress.

On its Web site, Universal declares that "no one is safe from the acid brush of Pat Oliphant."

AP contributed to this report
Posted by Unknown at 5:55 AM