Not Just in Israel! US Jewish Demographics Favor Orthodoxy

Why is this the case? There are two reasons.

First, Orthodox Jews (no matter what stream of orthodoxy), are less likely to marry out of the faith, which keeps their assimilation rates low at the same time that other Jews are intermarrying and assimilating at an alarming rate.

Second, Orthodox Jews (no matter what stream), are more likely to have large families than Jews belonging to other streams of Judaism. While reform and conservative Jews are busy building their portfolio and buying cars, orthodox Jews are getting married younger, having children right away, and continuing to have children for many years to come.

Yes, our status of living may not be as high as other Jews, but we are wealthier in other ways--in the ways of Torah, Mitzvot, and family!

This has lead to a greater and greater number of religious Jews everywhere in the world--Israel, the US, and Europe. As one of my friends quipped when a man in the grocery store asked her how many children she was intending to have, "At six million, I stop!"

Meanwhile, reform and conservative synagogues are struggling for members while orthodox synagogues are bursting at the seams. As synagogues search for ways to gain membership, they might consider becoming more religious--adding a mehitzah, getting rid of the microphone, closing the parking lot, and constructing and eruv. Religious Jews are looking for places to go, but the synagogues who want to include them must be willing to rise to a higher lever of observance in order to get the membership.

Unfortunately, however, there is a dark side to this growing religious movement--with the increase in BTs and Converts, we also have an increase in the numbers of people who aren't educated enough to ask the important questions. They go way over the mark in observance, sometimes missing Jewish values entirely. 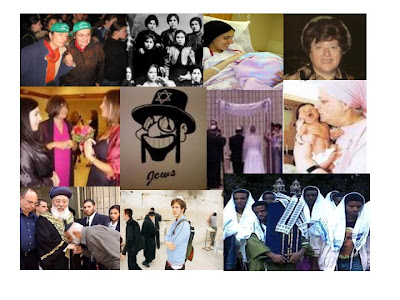 Religious Jews don't have to be limited to dressing like penguins and wearing scarfs on their heads. In our strength we must also enjoy diversity and understanding. Sephardim are not Lithuanian, Lubavich are not MO. We all have different traditions and different looks--but we must all respect each other as G-d fearing Jews--or we will tear ourselves apart.

Learning from one another and respecting each other's traditions does not mean we have to give up our own. It simply means that we understand that Hashm's words have lead to different traditions and, until the Moschiac shows, we shouldn't be trying to make a determination about who is right.

As I always say to my kids: "Pay attention to your own mitzvot! When you can conquer all 613 Mitzvot for yourself, then you can worry about someone else."

An Orthodox Ascendancy?
http://www.thejewishweek.com/viewArticle/c55_a15250/Editorial__Opinion/Opinion.html
by Steven Bayme
Special To The Jewish Week

On a family trip in the late 1950s to Hartford, Conn., a relative observed that nine new synagogues had opened in the city within the past year. Most were Conservative, some were Reform. When I queried whether any Orthodox synagogues had opened recently, my relative politely replied that Orthodoxy was entirely a matter of nostalgia and would soon go the way of the American buffalo.

In fact, the buffalo has made a remarkable comeback. At least equally remarkable has been the resurgence of Orthodox Judaism. Today, Orthodox synagogues and day schools flourish as never before in American Jewish history. Orthodox birthrates exceed those of the non-Orthodox by a factor of at least one additional child per family. Haredi birthrates generally are even greater.

Several factors account for this turnabout. The remnant of haredi Orthodox Jews that survived the Holocaust was determined to reconstruct Jewish life on American shores. Day school education — especially through the high-school years — has created a critical mass of literate and committed Orthodox Jews. In recent decades Orthodox leaders have created a new norm of a year-long study period in Israel following graduation from high school. And Orthodox family structures have been particularly powerful in harnessing Jewish tradition to enhance inter-generational ties. The portrait of the contemporary Orthodox synagogue includes grandparents, parents, and children celebrating together the joys of Jewish heritage.

What are the implications of this Orthodox growth spurt? First, the rest of the Jewish community, increasingly agonizing over whether it will in fact enjoy Jewish grandchildren, would do well to emulate the dedication of the Orthodox to insuring Jewish continuity by insisting on the primacy of Jewish education, and strengthening ties to Israel, which they consider central to the meaning of Jewish peoplehood and identity.

Conversely, a resurgent Orthodoxy, frequently accompanied by a rightward political and theological shift, often suggests the triumph of extreme rather than moderate positions as religious norms. The current effort to restrict conversion to Judaism even further serves as a case in point. Similarly, the widespread protests by official Orthodox organizations over the participation of a prominent Orthodox rabbi in a prayer service honoring the inauguration of President Obama suggests that the divide between Orthodox and non-Orthodox American Jews may be even greater then originally thought.

Moreover, a resurgent Orthodoxy differs with the larger Jewish community on a range of American domestic policy and church-state questions. Tuition tax credits for children attending Jewish day schools is one example. To be sure, Jewish communal divides on these issues date back at least half a century. However, Orthodoxy today, rightfully impressed with its tangible successes within America, appears far more willing to intensify political initiatives on the domestic policy agenda.

Finally, the Orthodox resurgence risks widening the divide between Israel and American Jewry. The long-standing monopoly of the Chief Rabbinate of Israel over questions of personal status suggests continued friction between Israel and the diaspora over the definition of who is a Jew, who is a convert to Judaism, and the rights of non-Orthodox rabbis to officiate at life-cycle events. These questions — critical to Jewish identity — present a face of Orthodox Judaism at odds with, and even alien to, non-Orthodox brethren in the United States.

Long eclipsed by the swing rightward, Modern Orthodoxy has also benefited from Orthodox demographic growth and appears poised to undertake bold steps to put the “modern” back into Modern Orthodoxy. In some respects, Orthodox feminism has led the way. A generation ago five prominent Orthodox rabbinic scholars banned women’s prayer groups. Yet today at least 80 such prayer groups exist across the country. Independent Orthodox minyanim are pushing the envelope further in efforts to attain greater gender equality. A new Orthodox rabbinical seminary strives to create an “open Orthodoxy” inclusive of all Jews, dedicated to social justice, and receptive to dissenting opinions.

Perhaps most surprisingly, Professor James Kugel of Bar-Ilan University, author of a magisterial work, “How to Read the Bible,” about biblical criticism, attracted large and even overflowing crowds at Yeshiva University, flagship institution of Modern Orthodoxy, as well as at other Orthodox institutions. The interest in Kugel’s book and lectures points to a critical mass of Orthodox Jews eager to probe both ties and tensions between Orthodoxy and modern culture.

What of the future? Orthodoxy will be a force to be reckoned with. Predictions of its demise have proven entirely fictional. One sociologist estimates that given Orthodox fertility and affiliation patterns, Orthodox Jews are likely to comprise as much as half of Jewish leadership of the next generation. Jewish organizations need to include Orthodox leaders in communal deliberations and provide forums for candid and mutually respectful dialogue across denominational lines.

The critical question, however, will be whether 21st-century Orthodoxy will be modern, open-minded, inclusive, and well-educated in both secular and religious realms. That question in turn will depend upon the struggles within Orthodox institutions for which face of Orthodoxy will prevail. Haredi Orthodox leaders fear correctly for the future of Jewish continuity and therefore believe that only maximalist positions may insure the Jewish future. Modern Orthodoxy, by contrast, appears willing to incur the risks of greater engagement with the secular and non-Orthodox worlds. Which sector will actually prevail over time will both determine the public face of Orthodox Judaism in Israel and America and affect the course of intra-Jewish relations in the 21st century.

Steven Bayme serves as national director, Contemporary Jewish Life, for the American Jewish Committee.
Posted by Unknown at 10:20 AM