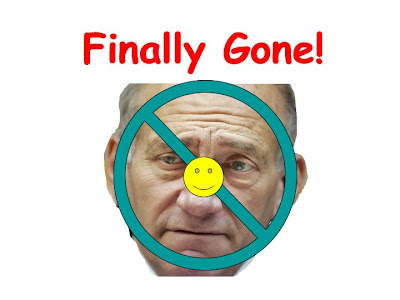 Olmert is a fool, and I hope not one person in attendance for his long lament about Begin and the need to give up all of Israel to the murdering arabs was willing to listen. Bibi has it right, for once. "We will make peace with those who WANT peace" is a good attitude. They shouldn't have a guarantee of their own little fifedom from which they can launch terrorist attacks. They simply should have the guarantee that, if they show they really want peace, we can make an agreement.

I don't know why everyone has the idea that every agreement we make with them must have a component of giving up land.

Does the US give up land every time they make an agreement?

Does the British Parliment agree to give up parts of London to get peace with the Irish every time they make an agreement?

Why do we need to give up land to make an agreement. How about having them give up their claim to land that isn't theirs in exchange for us not blowing them up or sending them away? Why don't we take the strong side of this and stop being bullied?

I'm just so glad Olmert is gone. I hope the door hit him where the good Lord split him, and I hope it hit him HARD.

I don't want him coming back through that door--he is corrupt and evil and traitorous.

"Even I did not think we could reach a peace agreement with Egypt. I can only guess that (Menachem) Begin knew in his heart that there was only one way to make peace – to give up all of Sinai, including Sharm el-Sheikh," outgoing Prime Minister Ehud Olmert said Monday during a special Knesset session commemorating the 30th anniversary of the historic accord.

Optimism
A day before the official end of his government's term, Olmert urged his intended replacement Benjamin Netanyahu to continue the peace process with the Palestinians and seek a two-state solution.

"There is no Jewish state without the guarantee of a Jewish majority for generations to come, and this majority does not exist in Greater Israel, which is home to millions of Palestinians," he said. "The conclusion is clear: Two states for two peoples. There is no alternative – a two-state solution with massive international backing. It's possible."

Olmert told the session that his government was close to reaching an agreement with Palestinian President Mahmoud Abbas, saying "given enough time, I believe we could have presented a peace agreement for the Knesset and cabinet's approval. This agreement would require a dramatic, painful and heart-breaking compromise."

Addressing Netanyahu, the PM said Israel was on the brink of direct peace negotiations with Syria. "You will receive all the details. Take the initiative fearlessly, don’t be deterred and history will repay you.

Olmert lauded Egypt's role in the negotiations on a prisoner exchange deal between Israel and Hamas, and said he "has no doubt" captive soldier Gilad Shalit will eventually be released.

Netanyahu, for his part, told the session that his government "will make every effort to achieve a just and lasting peace with all of our neighbors and the Arab world in its entirety.

"Any one of our neighbors who truly is willing to make peace will find our hand outreached," he said.

'Not too late'
As for the peace agreement with Egypt, the Likud chairman said, "Today we are marking three decades of calm, and this historic change should be praised whole-heartedly," and sent his regards to the Egyptian people and to President Hosni Mubarak "who is continuing in path of peace."

Defense Minister Ehud Barak said in his speech that "unfortunately, (late Palestinian leader) Yasser Arafat was no Anwar Sadat, and neither is (Syrian President Bashar) Assad."

"I believe that it is not too late; we should not give up and continue to strive for peace," he said.

Earlier Monday, Netanyahu informed his party's Knesset members of their designated positions in his new government.

MK Yuli Edelstein will receive an operational role, Netanyahu said, although his areas of responsibility have yet to be determined. MK Gilad Erdan was informed of his appointment as environment minister and will also be a member of the Judges' Election Committee and serve as the liaison minister between the government and the Knesset.

Netanyahu also informed MK Yisrael Katz of his decision to appoint him to the position of transportation minister.

MK Reuven Rivlin, also from Likud, was appointed Knesset speaker, while MK Yuval Steinitz is slated to be named finance minister.
Posted by Unknown at 3:11 PM