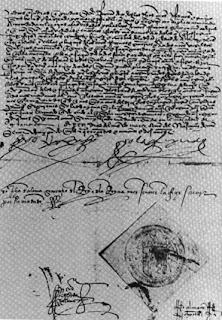 As Tisha B'Av comes, it is important for us not only to remember the destruction of the Temple and all the other horrible things that have happened on this day, but to pray intently that this will be the last Tisha B'Av that we fast.

It is with more than prayer that we will rebuild the Temple. This Tisha B'Av the Temple Institute will begin building the sacrificial altar. We must remember, it is not only with prayer, but with action, that our Temple will be rebuilt.

Here is a small article on the fast day, which begins tonight at sundown. For more information on the holiday, especially the differences in Minhag between Sephardim and Ashkenazim on this holiday, I recommend Rabbi Maroof's PDF, which may be accessed here.

A meaningful fast to everyone.

(IsraelNN.com) The fast of Tisha B'Av, the "saddest" day in the Jewish calendar, begins Wednesday evening at sundown, and ends Thursday evening.

Its name literally means "the ninth day of [the Jewish month of] Av," the date of some of the gravest tragedies to have befallen the Jewish People. Most notably, both Holy Temples in Jerusalem were destroyed on Tisha B'Av, but the list of calamities on this date includes also the following:


Despite the sadness of the day, the saddest part of the regular daily prayers - tachanun - is not recited, in the anticipation of the final joyous Redemption that will render Tisha B'Av a day of joy.

Many tens of thousands of people spend Tisha B’Av, or parts of it, at the Western Wall – which, together with the Temple Mount, is the sole remnant of the Second Temple.

Visitors spend hours mourning the destruction, the Exile of the Divine Presence and the unredeemed state of the Nation of Israel by reciting and studying the traditional Tisha B’Av lamentations and the Scroll of Eichah (Lamentations).

March Around the Old City
The traditional Women in Green Tisha B'Av March around the Old City will begin at 8 PM with evening prayers and the reading of Eichah, followed at 9:30 by the march towards the New Gate, Damascus Gate, a short ceremony at Lions' Gate, and culminating at Dung Gate near the Western Wall around 11 PM. Thousands of people generally participate in the march.
Posted by Unknown at 11:12 AM No comments: 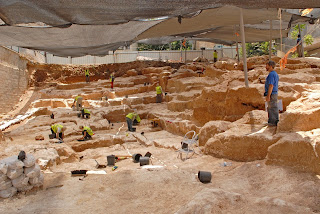 Constantly we dig and uncover significant finds about Israel's past as a Jewish Nation, we have a Torah which shows we are a Jewish Nation, we have evidence confirming our presence in the land for thousands of years--yet, we still have to apologize to the arabs and the other nations for existing, for wanting to live in our land, for daring to reclaim what is rightfully ours?

Here, again, proof of what our sages write, of what is in the historical record already--we prove something almost daily--but this does not bring back the Temple to our hands.

For G-d's Sake! What is going on in the world that bullies and brutes take what is ours and we do nothing?

As Tisha B'Av is upon us, as we move toward our saddest day, why do we not demand our own Holy Site? I am not just fasting for the destruction of the Temple, I am fasting for the continuous, daily, pain of seeing Jews praying to a Western Wall while arabs walk freely where no person should tread.

Why are we keeping ourselves in this state? The Temple is the Holiest place on earth, why are we not going to war to keep it? Why are we allowing the son of an arab who sits in the White House to tell us what is ours? We know what is ours!

Everyone knows what is ours--that's why they want to have it for themselves.

Dr. Ofer Sion, the excavation director, estimates, "The stones that were
quarried here were used by Herod to build the walls of the Temple".

An ancient quarry, c. 1 dunam in area and dating to the end of the Second
Temple period (c. 2,030 years old), was uncovered in excavations being
conducted on Shmuel HaNavi Street in Jerusalem, under the direction of Dr.
Ofer Sion and Yehuda Rapuano of the Israel Antiquities Authority, prior to
the construction of residential buildings.

Dr. Ofer Sion, the excavation director on behalf of the Israel Antiquities
Authority, believes, "The immense size of the stones (maximum dimensions:
length 3 m, width 2 m, height 2 m) indicates it was highly likely that the
large stones that were quarried at the site were destined for use in the
construction of Herod's magnificent projects in Jerusalem, including the
Temple walls. It seems that a vast number of workers labored in the quarry
where various size stones were produced: first they quarried small stones
and when the bedrock surface was made level they hewed the large stones. The
stones were quarried by creating wide detachment channels that were marked
by means of a chisel which weighed c. 2.5 kilograms. After the channels were
formed the stones were severed from the bedrock using hammers and chisels".

"We know from historical sources that in order to build the Temple and other
projects which Herod constructed, such as his palace, hundreds of thousands
of various size stones were required - most of them weighing between two and
five tons each", said Dr. Sion. "The dimensions of the stones that were
produced in the quarry that was revealed are suitable for the Temple walls.
The large section that was exposed is actually a small part of an enormous
series of quarries that was spread across the entire slope - from the
Musrara Quarter to the Sanhedria Quarter. The massive quarrying effort, on
the order of hundreds of thousands of stones, lowered the topography of
Jerusalem in the vicinity of the Old City. Today, with the exposure of this
quarry, the intensity of the building projects as described in the
historical sources can be proven: Flavius Josephus wrote that before Herod
built the Temple he prepared the infrastructure for it: the quarrying of the
Temple's stones lasted eight whole years. The Temple itself was built in a
relatively short period of time of two years. With the exposure of the
quarries in Sanhedria and Ramat Shlomo, it is clear that Herod began
quarrying closest to the Temple and worked away from it: first he exploited
the stone on the nearby ridges and subsequently he moved on to quarry in
more distant regions".

According to Dr. Sion, "In those days the world of hi-tech focused on
quarrying, removing and transporting stones. Historical sources record that
Herod trained more than 10,000 people to be involved in this work: they
prepared suitable transportation routes and then moved the huge stones in a
variety of ways - on rolling wooden fixtures that were drawn by camels, in
pieces on carriages, etc.

Among the artifacts that were discovered in the excavation on Shmuel HaNaiv
Street were metal plates (referred to in the Talmud as 'cheeks') that were
used as fulcrums to severe the stones from the bedrock, and coins and
pottery sherds that date to the end of the Second Temple period (the first
century BCE).
Posted by Unknown at 3:02 AM 1 comment:

OK, so we see that there is a significant difference in the way that Jewish Israelis and PA Arabs see the world.

A majority of PA Arabs would deny rights to Jews and xtians to worship or visit holy sites in Jerusalem--yet, in the Jewish State of Israel, arabs are given full right to worship and visit their holy sites--even to the exclusion of Jews visiting their own sites.

When Jerusalem is under Jewish rule, everyone has access. When it is under the rule of arabs, only arabs can visit.

Arab control over Jerusalem would spell disaster--not only for Jews, but for everyone.

Equally destructive would be Obama's plan to "internationalize" Jerusalem. Can you imagine the "international" committee's control of the Temple Mount? It wouldn't be long before we had PETA setting up an interactive museum dedicated to the pain and suffering of the sacrifices, feminist sadist transvestites putting up a protest tent, and devil worshippers demanding the opportunity to hold satanic rights there.

Obama's "international city" of Jerusalem already exists--under Jewish control. Peace in Jerusalem will exist only when Jews control it completely, with strength, and with respect for sanctity and history.

We must never give up our rights to our homeland. We must strongly, and in no uncertain terms, push back those who would suggest that even one square inch of Israel should be in the hands of another people.

M
-----
PA Arabs in Late Response to Obama Speech: No, We Can't
http://www.israelnationalnews.com/News/News.aspx/132187
by Maayana Miskin

(IsraelNN.com) A poll released this week showed that PA Arabs are reluctant to grant rights to Jews or Christians within areas demanded for a PA state. A survey conducted by the Arab World for Research and Development among 1,200 Arab residents of Judea, Samaria and Gaza found that did not feel Jerusalem should be shared with Jews and Christians.

Reject violence? No thanks
More than 45 percent of those surveyed disagreed with a second statement of Obama's in which the president called on the Arab world to reject violence and killing as a means of struggle. Twenty-two percent did not give an answer, while the remainder said they “agree” or “somewhat agree” with the statement.

The poll showed that PA Arabs were pessimistic regarding Obama's speech to the Arab world in early June. More believed that Obama's visit to the region would strengthen Israel, increase restrictions on Gaza, and do nothing to promote negotiations than believed the opposite. Only 14.2 percent said they fully agreed that Obama is serious when he calls for the creation of a PA state.

Jews want rights as minority in PA
Another new poll showed that most Israeli Jews believe that any future Palestinian Authority-led Arab state in Judea and Samaria should provide Jews with equal rights, including the right to live freely in its territory. The statistic was revealed Thursday by a Maagar Mochot poll published by the Independent Media Review and Analysis.