Israel Needs a Constitution, But Be Careful About What's In It!! 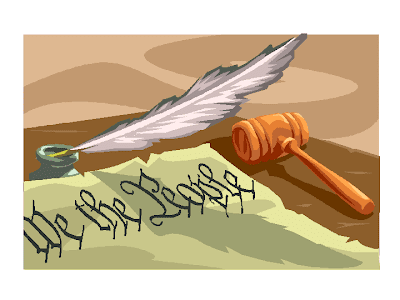 This is a beautifully written piece by Rabbi Brackman, and I totally agree with his assertion that Israel is being torn apart by different factions and that we need a constitution to deal with those pressures.

He brings up how the IDF does things constantly which are offensive to the religious soldiers, and he gives the example of religious soldiers walking out on a woman singing a solo at an IDF event, and the chief education officer's insensitive comments about the situation.

I agree. One of the greatest of these offenses (which is not brought up in Rabbi Brackman's article), is using the IDF as a wrecking ball for settlements in Yesha.

Yesterday, A soldier in the transportation corps was tried and sentenced on Thursday to 20 days in jail for his refusal to take part in the uprooting of Jews from the Meoz Esther outpost near Kochav Hashahar, earlier in the day.

The unidentified Solder is a resident of the Samarian town of Kedumim, and he is one of those who was uprooted from the northern Samarian Jewish community of Sa-Nur in the Disengagement of 2005. He refused to take part in the emptying of five buildings in Meoz Esther that the IDF was tasked with destroying.

This means the soldier will be in jail during Pesach--a very ironic situation, don't you think? He is being jailed during our celebration of freedom for the crime of refusing to evict Jews from the land that G-d brought us to. Hmmmm.

Believe me, if listening to a woman’s voice was the least of these religious IDF soldiers had to put up with, we could easily solve the problem—but it is not.

Rabbi Levi Brackman may have a point that we need a constitution in Israel to deal with these issues, and he is right. Without that constitution, our supreme court is woefully incompetent (and maybe WITH the constitution too!).

A constitution should never concern itself with the enforcement of a “common purpose” or “values.” Instead, a constitution must define the rights of human beings within the government system and the responsibility of those individuals as members of that nation.

In short, a constitution should not be about “purpose and values,” it should be about “rights and responsibilities.”

I think the reason that Israel never defined a constitution is that Israel was founded by socialist-leaning seculars. In order for a constitution to function properly, one must be willing to define the limitations of the state in regards to individual rights. This is the antithesis of socialist thinking.

Israel needs a constitution that protects rights and demands responsibility. However, that type of constitution requires that Israeli citizens begin to see themselves not as an extension of the state, but as individuals with rights and dignity that is G-d given and beyond the control of any state.

"We hold these truths to be self-evident, that all men are created equal;
that they are endowed by their Creator with inherent and inalienable rights; that among these, are life, liberty, and the pursuit of happiness; that to secure these rights, governments are instituted among men, deriving their just powers from the consent of the governed; that whenever any form of government becomes destructive of these ends, it is the right of the people to alter or abolish it, and to institute new government, laying its foundation on such principles, and organizing its powers in such form, as to them shall seem most likely to effect their safety and happiness."
--Declaration of Independence as originally written by Thomas Jefferson, 1776. ME 1:29, Papers 1:315

With cracks in Israeli unity widening, it is time to unify around voluntarily accepted common purposes and values

There are worrying signs that Israeli society may be tilting towards a damaging inner fight between the religious and secular segments of society. This is occurring not only on the level of national politics where there has been contentious discussion about secular civil marriage and conversion reform, but perhaps more disturbingly, this is also happening in the army.

Earlier this month about 100 soldiers walked out of a Paratroop Brigade meeting because a female performer began to sing. Anyone familiar with the Jewish religion knows that Jewish law prohibits men from listening to a woman singing a live solo. Clearly a secular person will not agree with the reasons for this law. But the rationale of the law is irrelevant. What is important here is that the soldiers sensibilities, religious or cultural, be respected.

But this did not occur. Instead, according to Ynet, the army's chief education officer, Brigadier General Eli Shermeister, described the exit of the religious soldiers as a "worrisome phenomenon that should not be accorded continued legitimacy." He explained that these events are designed to foster group cohesion and allowing some participants to leave defeats that purpose.

IDF offensive to religious troops
It is frankly unbelievable that the IDF’s top officer for education does not realize that it is the organizers responsibility to ensure that the program will not cause offense to the participants. His suggestion is akin to me calling you a derogatory name and then blaming you for being offended. If this would be the first time this happened the army could be forgiven, but they have been offensive to religious soldiers numerous times before and with a similar result.

Clearly in the mind of Brig.-Gen. Shermeister having a woman sing a solo at an event that the army has mandated religious men to attend does not contradict his idea of unity. The reason is obvious. He represents and erroneous point of view that sees unity solely as represented by the externalities. If everyone sat and listened to the assembly, wore the same uniform and clapped in the same manner there would have been unity in his opinion. The fact that there was no common purpose or unity of values does not affect his idea of harmony.

The Torah, and therefore religious Jews, has a completely different take on the concept of unity. For the first twelve days of the month of Nissan (that began this week on Thursday) we read the part of the Torah that describes the sacrifices brought by Jewish tribal leaders during the dedication of the tabernacle in the desert. Each tribal leader brought exactly the same package of sacrifices albeit on a different day.

Common purposes and values
This underlines the Torah’s view of unity. Externally the tribes could not have been more different. They were all given different blessings by the patriarch Jacob. Each tribe had a different flag and performed different tasks and made a living in different ways. However, they all had the same inner core of values. This was represented by the fact that when it came to the service of G-d they all as individuals brought exactly the same package of sacrifices.

A perceived cohesiveness represented by an exterior show of unity counts for very little. Real unity and interconnectedness is characterized by a common purpose and values. In Israel the common purpose has always been fighting for the survival of the country, a unity that has been thrust upon Israelis against their will. Tragically the cracks are visible all over the place.

Now with a new unity government about to be installed, that includes religious parties as well as Right and Left-wing politicians, it is an opportune time to give up on the shallow idea of unity that we have become used to and work together to unify around voluntarily accepted common purposes and values. Maybe it is finally time to bite the bullet and form a formal constitution that all Israelis can unify and rally around. If Iraq can do it why can’t Israel?
Posted by Unknown at 3:39 AM