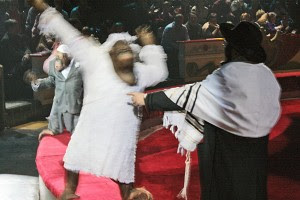 I can't get over this. I know that the people interviewed in this story are trying to make excuses for the behavior, but there are no excuses for this behavior.

It is Borat, but real.

Very creepy, horrible, and simply awful. This is an embarrassment to everyone in Russia.

No civilized society would ever accept or approve of this behavior.

A man dressed in Chasidic regalia speeds in a go-cart around Moscow’s one-ring Circus Nikulina. Aziz Askaryan then dismounts and leads two gangly orangutans -- one in a suit and kipah, the other in a full bridal gown -- on a lurching matrimonial march toward a hastily constructed chupah in front of a guffawing audience.

The mock Jewish wedding between two orangutans has been the closing number for weeks in Act I of the famed Moscow circus, whose theme is “Empire: A Magical Show with Bright National Flavor.”

It has stirred some conversation among Jewish leaders here. But most say that the act, which might raise eyebrows in the West, is met in Moscow with giggles or yawns.

“I think it's maybe in bad taste, but you must know that Russia is different than Western nations in its humor,” Baruch Gorin, a spokesman for the Federation of Jewish Communities of Russia, told JTA.

Russians see the act through the prism of a longtime love of the circus with a pinch of Russian humor that often makes light of minorities, including off-color jokes about “Yids,” among others.

If anything, the show is a nod to an array of ethnic groups that comprise the Russian empire: a magician is dressed as Caucasian mountain man, acrobats are dressed as Cossacks and other performers are dressed as Ukrainians.

The only difference in the Jewish number is that Askaryan, wearing fake sidecurls and a tallit, has primates playing the roles of the Jews. The scene evokes a visceral reaction -- laughter for most, shock for others.

The circus is one of Russia’s oldest, located in the heart of Moscow in a permanent complex that seats some 2,000 people. Its clowns famously were awarded status as People’s Artists of the Soviet Union.

Some Russian Jewish leaders noted that the circus included Jews among those who comprise the fabric of Russia’s power, which may not have been the case in other times.

“They took Jews as an example of the nation that exists in Russia; they didn’t single them out,” said Motya Chlenov, head of the Moscow office of the World Congress of Russian Jewry. “Maybe it’s not smart; maybe it’s a silly thing. But it’s not pushing an anti-Semitic purpose.”
Posted by Unknown at 11:26 AM