Rabbi Elyashiv Rules Non-Jews Can Wed Through Civil Marriage, After Rabbinical Court Confirms Both Partners Are Not Jewish 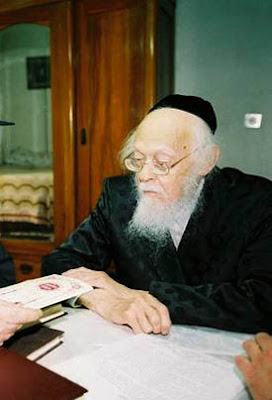 Well, chalk one up for BASIC HUMAN DIGNITY!! This action, I believe, would prevent a lot of the Hillul Hashm of preventing non-Jews from entering into a recognized partnership with one another in the State of Israel.

I think this is a very reasonable and appropriate answer to all the objections anyone had in Israel about non-Jewish marriage. No, we don't want non-Jews and Jews marrying. Yes, we want to provide an opportunity for non-Jews to marry each other, as it is a basic human right.

The only thing I am worried about is the fact that the Rabbinical Courts are already overwhelmed. Now they will have the additional burden of determining non-Jewish status for those petitioning for civil marriage.

On the other hand, I like the idea that the Rabbinical Court will suddenly be faced with deciding who is NOT Jewish, rather than who IS Jewish. It seems to me that the Torah prohibition of allowing Jews to be called non-Jews and not follow Shabbat and intermarry is very very serious. A lot more serious than what they have faced in telling Jews they can't be Jews and knowing, very well, that those Jews will continue being Jews anyway even if they can prove it.

Now, if this decision is followed, we will have a situation that the Rabbinical Court must rule on something that will be completely their responsibility if they get it wrong, and they will have to pay with their own souls. It is very dangerous to rule that someone can marry a gentile.

Now, I will sit back and watch them reverse their ideas about how they rule on Jewishness. After all, I think it is a lot less serious to assume someone is Jewish than assume they are not and allow them to enter into a binding relationship which may produce children.

I just hope the Rabbinical Court won't sit on the fence and refuse to rule at all--which is what I suspect they will do. We already have a whole bunch of people sitting in perpetual uncertainty without an answer, all we need is a whole new group to add to that!

The whole answer to this dilemma, of course, is not to have a state marriage at all. I don't think any government in the world, other than Theocracy, has the right to grant a "marriage." Marriage is a religious union, not a secular union.

I think that Israel needs to decide whether they are a Democracy or a Theocracy and stick with it.

If Israel is a Theocracy, then BE one. Judge by Torah Law, Re-establish the Sanhedrin, and get rid of the stupidity of these Supreme Court Justices that think that Arabs have more right to our land than we do. Get rid of the non-Kosher food sold in the stores and supermarkets, and shut down public transportation on Shabbat. Who cares what the EU or the US thinks! The arabs have established Theocracies, and the EU and the US are fine with it. Why not us?? We are supposed to be a light to the nations!! Light that light!!

If Israel is a Democracy, then it must be completely secular. They need to eliminate all ties to the Rabbinical Court, they need to keep their hands off all religious affairs including education, conversion, and marriage. All that a secular democratic government has a right to do in regard to the union of two individuals, is to recognize contractual agreements in a civil court.

Such arrangements would allow people to have rights to see someone who is in their last moments of life, to determine their fate if there is a question, to share in domestic and/or professional property, and to qualify for benefits under insurance.

This contractual agreement would be a domestic partnership or civil union, NOT a marriage. Marriage is a religious concept, and should only be inacted within the confines of a religious group or institution.

A Democratic state should never be involved in any religious institution, marriage or otherwise.

I say the same thing about the United States. We should have only civil unions in the US as well. All "marriages" should only be conducted by religious groups and ONLY religious groups.

When I married my husband, for example, it was a religious marriage. Later, in order for that union to be recognized by the government, we conducted a separate civil ceremony with a judge.

Those who say, for example, we should have "Gay Marriage" in the US are completely wrong--not because of the "Gay" part, but because of the "Marriage" part. The state should only be involved in a contractual agreement between those adults--a civil union or domestic partnership--NEVER a "Marriage."

If a Gay couple finds a religious group willing to marry them, then, so be it--they can be married--but it should not be under the auspices of a government.

For those who worry about who would be allowed to enter into a domestic partnership or civil union, those guidelines have been, are, and will be delineated by the government by law--as all contracts are regulated by law.

Spiritual leader of Lithuanian stream rules non-Jews can wed through civil marriage, but only after rabbinical court confirms both partners are not Jewish

Over a month after the general elections, Rabbi Yosef Shalom Elyashiv, the spiritual leader of the Lithuanian stream of ultra-Orthodox Judaism, ruled on the hot topic of the coalition negotiations – civil marriage.

According to Rabbi Elyashiv, the Halacha allows instituting civil marriage in Israel for non-Jews only. Therefore, any couple wishing to wed through civil marriage will have to prove to a rabbinical court that both partners are not Jewish, this in order to prevent "legally sanctioned" assimilation.

The rabbi stressed that civil marriage between Jews, or a mixed couples, was out of the question.

The United Torah Judaism coalition negotiations team is expected to present this as a major demand to the Likud.

The ruling was also authorized by the Gerrer Rebbe and Rabbi Aharon Leib Steinman.

Chief Rabbi Shlomo Amar has recently reached a compromise with the Yisrael Beiteinu party, according to which non-Jews will be allowed to hold civil marriage. However, the chief rabbi did not condition this on a rabbinical court approval.
Posted by Unknown at 5:53 AM