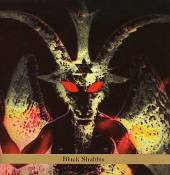 I don't know why someone has to choose between being a good Jew and liking a certain type of music. Just because someone is religious doesn't mean they don't long for some great guitar rifts, some transcendent drum solos, or a booming base line.

Although the new CD featured in this review is only a sampler of Jewish Heavy Metal music, perhaps it will lead to greater things--like maybe people can hear one of the sample tracks and actually go purchase a whole CD by the artist in question.

Who knows? Maybe Jewish heavy metal will grow like Jewish Reggae and Jewish Punk. That would be great!

Anyway, at least this is out there. Hope is not lost for the combination of loving Hashm and loving Metal.

As a university student in the early 1990s, I fantasized about a Jewish metal band. Not a metal band with Jewish members (there have been plenty of those) but a metal band that drew on Jewish symbols and took delight in their transgression, just as other metal bands twisted and subverted Christian symbolism. My friend Saul (a guitarist) and me (a bassist) formed an imaginary band, Death Matzo, who would celebrate the murder of Christian children to provide blood to make unleavened bread. The idea remained a fantasy not just due to the fact that we couldn’t find a drummer who shared it, but also because the idea was so silly, unlikely and offensive that it was better it stayed within our fertile imaginations.

Yet, in the last few years, my fantasy of Jewish metal has been realised. In Israel, bands like Orphaned Land, Desert, Amaseffer and Arallu have explored Jewish musical and lyrical themes in novel and interesting ways. Elsewhere, Jewish metal is rarer and more underground but if you look hard you find strange projects like the Lubavitch black metal of Schneerson (I kid you not) and the dodgy "Ju Metal" shtick of David Lazzar (The ‘Rocking Rabbi’). Now though, a newly released Jewish metal CD bears the unprecedented imprimatur of the cutting edge of the musical and Jewish world – Black Shabbis, by Jamie Saft.

Black Shabbis is released by John Zorn’s Tzadik label. It was only a matter of time before the label put out a CD like this. Zorn himself has flirted with extreme metal on his Painkiller project (which featured ex-Napalm Death drummer Mick Harris) and some of his Electric Masada work with Marc Ribot explores the outer limits of guitar noise music.

Saft himself is the kind of prolific polymath that the downtown NY Jewish music scene adores, responsible for a host of film music, jazz and way-out -there recordings with a bewildering array of collaborators. In this respect, Black Shabbis is not the product of a metal band rooted in the metal scene, but of a one-off project that sets out to explore a particular aesthetic. Most of the music is played by Saft himself, with a small group of guest artists on some of the tracks (including Mr Bungle bassist Trevor Dunn).

Saft has clearly been thinking along the lines that I was when I fantasised about Death Matzo – except of course he has the ability and seriousness to see it through. The vocabulary of metal is rooted in a fascination with the dark side, with western Christian civilization’s rich and lurid imaginations of evil. Yet the dyad Christ – Satan that is repeatedly explored and transgressed in metal culture (and particularly in black (Satanic) metal) is constructed without reference to the deep-rooted association of Jews with the devil. Jews rarely appear in the metal mythos and when they do it is in the marginal National Socialist black metal scene, whose proponents ironically associate Jews with Christianity. So there is a rich vein of symbolism and mythology that awaits any Jewish metal musician brave enough to mine it.

The cover of Black Shabbis makes the association of Jews with diabolism explicit: a winged goat-headed man with burning red eyes sports a star of David on his forehead. The 9 tracks delve into the dark side of Jewish history. The CD has no lyrics sheet and in any case some of the songs don’t have words, however the inlay sleeve does print a short paragraph describing the themes and sources of inspiration for the songs. I was immediately drawn to the track ‘Blood’, which unlike Death Matzo does not celebrate but condemns the blood libel as a ‘hideous caricature’.

Most of the album's other tracks are explained by particular facets of anti-Semitic libels and incidents including: ‘Der Judenstein’ (a blood libel by the Grimm brothers), ‘Kielce’ (a post-war massacre of Polish Jews) and ‘The Ballad of Leo Frank’ (victim of an early twentieth century lynching in the American south). This is not the playful ‘fuck you’ that would satirise anti-Semitism by reclaiming its most outrageous accusations that I dreamt of many years ago, and of course the CD is all the better for it. Unlike my puerile vision of Jewish metal, Saft’s is a serious exploration of the possibilities that metal music may provide for dramatising and exploring the horror of the anti-Semitism that is deep-rooted in western constructions of ‘the Jew’.

And Saft is a genius at wielding and manipulating the musical tools available in the metal armoury. Contrary to the stereotype of metal as a stock of banal clichés played by morons, metal has diversified enormously in the last three decades, creating a sophisticated and complex panoply of sounds and possibilities. Saft shows no loyalty to any one style and the tracks skip radically between influences and sub-genres: The aforementioned ‘Blood’ has a Slayer-type vibe; ‘Army Girl’ is a twisted metallic rhythm and blues with its constantly repeated line ‘you’re making me crazy’ unsettling the mix; ‘Kielce’ is a disturbingly anarchic mix of free-form drums, guitar noise and black metal screams. Saft’s metal is not the metal of Motley Crüe (not that there’s anything wrong with Motley Crüe) but the ‘hipster metal’ that has in the past few years drawn critics to reconsider this previously revised genre and praise radical metal artists like Sunn 0))), Nadja and Mastodon. In short, Black Shabbis is hipster metal for hipster Jews.

What Saft does not do though is to integrate Jewish music sources into the mix. True, opener ‘Black Shabbis – The Trail of Libels’ is a strange surf guitar piece whose Dick Dale associations vaguely recall Jewish and Middle Eastern music sources, but that’s about as far as it goes for ‘ethnic’. Not that that’s a problem, but it would be intriguing to hear Saft or another Tzadik artist metallically mutate klezmer or some other Jewish sound. For now though, Black Shabbis will provide unnerving delights for anyone like me who is as obsessed with the possibilities of the distorted guitar as they are with possibilities of Jewish identity.
Posted by Unknown at 2:14 AM