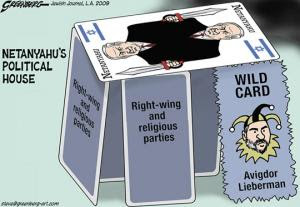 I KNEW it! I knew this would be Bibi’s coalition!

On February 11, I predicted EXACTLY what would happen. Lieberman's Party, Shas Weenies, Labor . . .

Right now, UTJ is not in the coalition, but I will bet you that Bibi continues his negotiations with UTJ and gets them in the coalition before the deadline (in what the Media will probably report is his “need to reach out to the right wing parties,” but is actually a strong warning to Labor that they need him more than he needs them).

Bibi is the ultimate weasel (which, actually, is an insult to weasels. Sorry, my little furry friends!). He wants to be, aches to be, an Obama sycophant--not because Obama is good for Israel, but because Obama is the latest style--you know, like his suit and tie. He wants to keep up with the latest in men's fashion. Livni would have made the outfit perfectly--he could have rode the Obama fad like a cresting wave--but Livni wouldn't let him do it!

Do your hiking in the Golan, the Judean desert, and Samaria NOW folks. Visit the holy sites in Jerusalem while you can. Soon, you won’t be allowed into the “closed military zone” where Hezbollah, Fatah, Hamas, and Al Queda will begin to fire their rockets into the heart of Tel Aviv and Jerusalem because "the coalition made him do it!" All the while, don't forget who made this coalition and why it was made that way.

I fear that Bibi will complete the destruction that Olmert started. I hope, this time, I am wrong.

(IsraelNN.com) Labor party chairman Ehud Barak has reached an “understanding” on a coalition deal with Likud party chairman and Prime Minister-designate Binyamin Netanyahu. It is not clear whether his party will go along with it; the vote is to be held this afternoon (Tuesday).

Negotiators for the two parties agreed on a deal early Tuesday morning after meeting for round-the-clock talks at Likud headquarters at the Maccabiah Village in Ramat Gan.

Barak and Netanyahu joined the marathon talks overnight, and both were expected to initial the agreement before it is brought before the Labor party’s governing council. The Labor party chairman will present the deal on Tuesday to a conference of his party’s Central Committee, where it will be decided whether to approve the agreement and join the government or not. Opposition to the agreement within Labor is very stiff.

Government Pulled Sharply to the Left
The agreement pulls what the country thought would be a right-wing government strongly to the left. It reiterates that Israel is obligated to all previous diplomatic agreements signed in the past, and “will act to achieve peace with each of its neighbors.”

The agreement gives Labor the Defense, Industry and Trade, Agriculture and Welfare ministries, as well as a minister-without-portfolio. Defense Minister Barak will be a “full partner” in all security matters. The Knesset Foreign Affairs and Defense Committee will be headed by Likud and Labor MKs in rotation, beginning with Labor. Laws against illegal construction in outposts and in the Arab sector will be enforced.

The Likud also came very much towards the socialist Labor party on financial issues, signing what Labor’s Shalom Simchon called “an economic agreement that is unprecedented in its socialist nature.”

Netanyahu Will be Free to Abandon NU, UTJ
If Labor does indeed ratify the agreement, Netanyahu will have a sufficiently large parliamentary majority to walk away from the smaller right-wing parties that supported him in the elections, such as Ichud Leumi (National Union) and United Torah Judaism (UTJ).

Negotiations with Ichud Leumi have been particularly difficult. Party chairman Yaakov "Ketzaleh" Katz no longer insists on being given the Housing Ministry portfolio, as it had previously been promised to Shas. However, the party continues to demand that the Likud remain loyal to the Land of Israel and refuse to endorse the U.S.-backed “two-state solution” establishing a Palestinian Authority state.

It is still not clear whether Barak’s agreement to join a Likud coalition will be supported by his party’s rank and file, however. A wide range of members have been adamantly opposed to the prospect of Labor joining a Likud-led coalition. The current proposal, which gives Barak – and not the party members – the right to appoint ministers, has angered them still more.
Posted by Unknown at 4:36 AM