It's Snake Season in Israel--and I'm Not Just Referring To The New Government! 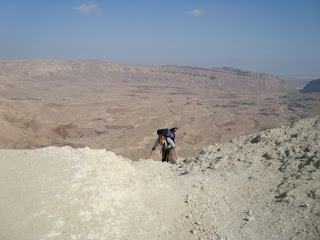 My son loves to hike. In the last few months, he has hiked in the Golan, the Negev, the hills, the mountains, the valleys . . . He is also camping a lot.

As you are aware, I am an outdoor type of woman, raised on a small ranch, unafraid of spiders, snakes, and the like. In fact, when there is some sort of bug or varmint in the house, it isn't my husband the family rouses, it is me.

So, when I was in Kedumim, a few of my fellow travelers brought me a small black sleek snake on the end of a shovel and said, "We know you know about snakes, and we are having an argument about whether this snake is dangerous or not. Does it look poisonous to you? Can we pick it up?"

I answered, as anyone who is familiar with the outdoors would answer: "If you don't know a specific snake is absolutely safe, don't touch it!" I, instead, suggested they release it some distance (like, about a half a mile) away from the area we were working. 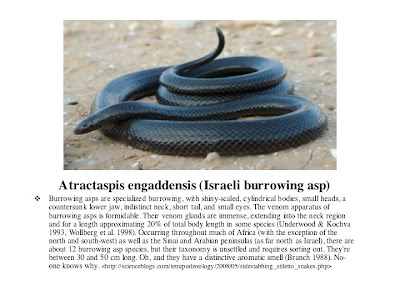 Later, we looked up the snake in the local library and found out it was a Atractaspis engaddensis (Israeli burrowing asp, also known as an Israeli Mole Snake)--a snake that LOOKS harmless, but is definitely NOT harmless (it's venom ranks as the third most toxic in the world).

Get this, that snake doesn't even need to open its mouth to kill you. It has a side-stabbing fang that it uses to kill you.

Anyway, back to my son. I want him to know what kinds of snakes are dangerous now that Israel's snake season has started, and I looked for a comprehensive and easy place to go to find out about them and what they look like.

Maybe such a guide exists in Hebrew, but it is definitely lacking in English, so here's what I compiled from various sources (along with pictures) so that I, you, AND my son can be aware of the dastardly denisons of the desert (and the forest) BEFORE you go out and meet them.

On that note, Hadassah hospital has a great article on what to do when encountering poisonous snakes, scorpions, and spiders in Israel--it is a must read.

First, a small article from Arutz7 from today, just so you know I'm not just a paranoid mother:

(IsraelNN.com) Snake season has come to Israel as poisonous snakes have bitten two people within the last 24 hours. Doctors treating both victims at Hadera’s Hillel Yafeh Hospital report that the victims were bitten by the dangerous Israeli vipers.

The first victim, a man in his 60’s, was bitten in his hand while working in the garden. Arriving at the hospital in a confused state, the man was treated at the cardiac intensive care unit.

The second victim, in her 20’s, arrived in a conscious state to the hospital. However, her general condition declined as the snake’s toxic venom spread throughout her body. The victim was admitted to the hospital for observation.

OK, not good. So, let's start with the Israeli Viper. This is what the nasty snake looks like:

And here's some details about the snake--just in case the photos and the article aren't convincing enough.

Description: Olive to rusty brown with a dark V-shaped mark on the head and a brown, zigzag band along the back. 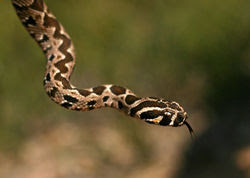 Characteristics: The Palestinian viper is closely related to the Russell's viper of Asia. Like its cousin, it is extremely dangerous. It is active and aggressive at night but fairly placid during the day. When threatened or molested, it will tighten its coils, hiss loudly, and strike quickly.

Habitat: Arid regions, but may be found around barns and stables. It has been seen entering houses in search of rodents.

Now for some more interesting poisonous snakes in Israel. Here's are some of the most common, with pictures: 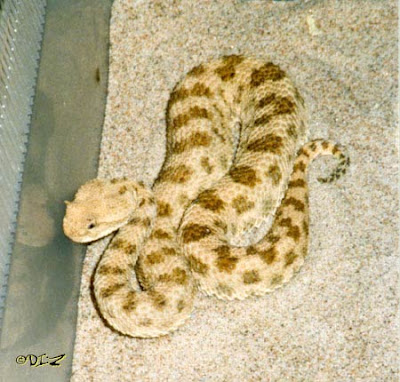 Description: Pale buff color with obscure markings and a sharp spine (scale) over each eye. This snake’s appearance if so similar to that of the Field's Horned viper that they are almost impossible to differentiate in the wild. The main differences are in scalation and venom composition.

Characteristics: As with all true vipers that live in the desert, it finds refuge by burrowing in the heat of the day, coming out at night to feed. It is difficult to detect when buried; therefore, many bites result from the snake being accidentally stepped on. Its venom is hemotoxic, causing severe damage to blood cells and tissue.

Habitat: Only found in very arid places within its range. 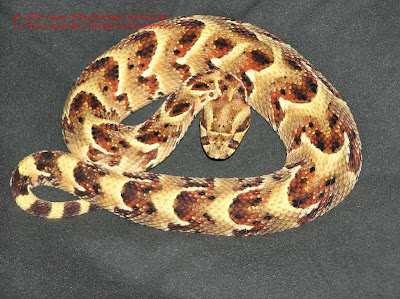 Description: Yellowish, light brown, or orange with chevron-shaped dark brown or black bars. Characteristics: The puff adder is the second largest of the dangerous vipers. It is one of the most common snakes in Africa. It is largely nocturnal, hunting at night and seeking shelter during the day's heat. It is not shy when approached. It draws its head close to its coils, makes a loud hissing sound, and is quick to strike any intruder. Its venom is strongly hemotoxic, destroying bloods cells and causing extensive tissue damage. 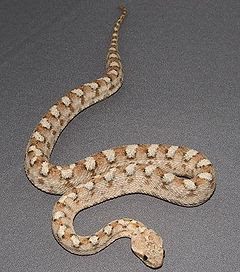 
Description: Color is light buff with shades of brown, dull red, or gray. Its sides have a white or light-colored pattern. Its head usually has two dark stripes that start behind the eye and extend to the rear.

Characteristics: A small but extremely dangerous viper. It gets the name saw-scaled from rubbing the sides of its body together, producing a rasping sound. This ill-tempered snake will attack any intruder. Its venom is highly hemotoxic and quite potent. Many deaths are attributed to this species.

Habitat: Found in a variety of environments. It is common in rural settlements, cultivated fields, arid regions, barns, and rock walls.

Description: W. aegyptia is entirely black in color, and has highly shiny scales. W. morgani differs in having a juvenile pattern of reddish crossbars on the back, and lower average ventral and subcaudal scale counts.

Characteristics: This snake is an aggressive snake, rearing its head without spreading a hood or hissing in defense. It is easily mistaken for a burrowing asp. It’s venom is highly toxic, even in limited quanitites.

Habitat: They are native to arid and scrubland habitats of the Middle East. Walterinnesia aegyptia is found in the countries of Egypt, Israel, Jordan, northwestern Saudi Arabia and probably Syria, whereas W. morgani occurs in Iraq, Iran, Kuwait, southern Turkey[2] and eastern Saudi Arabia. 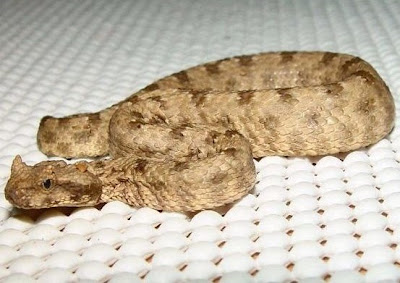 Description: Pale buff color with obscure markings and a sharp spine (scale) over each eye. This snake’s appearance if so similar to that of the Horned desert viper that they are almost impossible to differentiate in the wild. The main differences are in scalation and venom composition.

Characteristics: The venom of this snake is unusual in that contains several fractions that show marked neurotoxic activity (more like a cobra than a viper). It is especially dangerous because no antivenin is available for bites from either subspecies.

Habitat: The desert regions of Sinai Peninsula and southern Israel.