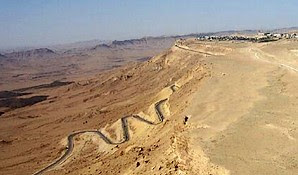 (IsraelNN.com) The Ministry of Health called Tuesday on doctors and nurses in the Eilat area to come to Yoseftul hospital immediately to help treat those injured in a bus accident. So far it has been reported that 25 people were killed in the accident.

Haaretz Reports that Eilat Mayor Avi Cohen told Channel Two television that there were 54 people on the bus and that no-one on board had escaped unscathed.

He said the accident had occurred on a "very dangerous slope" in the road.

The bus was apparently carrying a group of tourists who had just arrived on a flight from St. Petersburg and were en route to Eilat for vacation.

At least twenty people were killed and dozens were injured when a private bus transporting Russian tourists from an airport near Eilat collapsed off the Mitzpe-Ramon - Eilat road into a 80-meter ravine on Tuesday afternoon.

At least 20 casualties were being evacuated by MDA ambulances and three helicopters to Soroka Hospital in Beersheba and the Yosephtal Hospital in Eilat. Many of the wounded are reported to be in serious condition.

Six people were reportedly trapped in the bus.

The reason for the bus's collapse was not immediately clear.

A woman speaking to Israel Radio from the site of the accident said the scene looked "like a killing field." She said the bus landed on its side after pieces of it broke off during the fall. She said some people were crushed under the bus when it landed.

At least five of the passengers were seriously hurt, Israel Radio reported.

The Health Ministry called upon doctors and nurses vacationing in Eilat to head to Yosephtal Hospital and provide assistance. Doctors from the Soroka Medical Center in Beersheba were being flown to Eilat to assist the local hospital.
Posted by Unknown at 6:13 AM