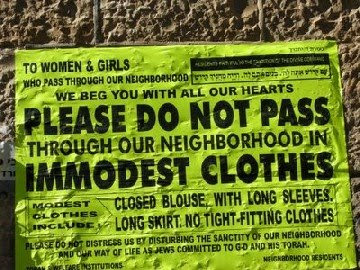 This is so completely out of control that I have to say something about it. What has happened here? Have these people completely forgotten everything that is in the Torah and have replaced it only with small bits of chumrot that have lodged in the crevices of their souls and putrified and infected the rest of their being?

Have they completely forgotten everything in the Torah, their Siddur, Pirke Avot, the Talmud that implicitly directs them to love one another, that warns them against such self-righteous and destructive behavior?

These people have gone so far over to the other side that they have broken the most basic laws of Shabbat. They have caused a desecration of Hashm’s HOLY NAME on Hashm’s HOLY DAY!

According to my count, the men who attacked these young women violated at least two laws of Shabbat--trapping (they surrounded the girls), and slaughtering (one must not bruise or injure anyone or anything on Shabbat).

There is no Torah commandment that prevents men and women from speaking to one another, from talking to one another--and certainly, even if one were to draw the deepest meaning from some obscure passage, it would not rise to the same import as violating the laws of Shabbat! The only prohibition is in touching—and even that is a fence, introduced by our Sages in order to prevent the possibility of inappropriate sexual contact.

They must be reminded that they are not G-d.

That job has been taken.

It is not available.

Growing tensions between ultra-Orthodox and religious residents in the town of Beit Shemesh, near Jerusalem, have recently escalated into violence as three teen girls were beaten up by haredim who claimed they were "immodestly" dressed.

The incident was the last in a series of reported attacks by members of the Haredi Community faction on their religious neighbors, prompted by the latter's' alleged "promiscuity" and negative influence on haredi children.

According to reports, the three 15-year-old girls went for a walk after the Shabbat dinner last Friday, and passed through a haredi neighborhood. At some point they noticed that they were being followed by several men. A Few minutes later the men entered one of the buildings and then came back outside accompanied by dozens of people who then stormed the girls.

They kicked them until they fell on the ground, and started hitting them and throwing eggs at them while shouting, "Nazis, get out of here."

Two of the girls managed to escape, while the third got away only after a passerby protested the attack and drew the attention of the crowd. A haredi woman from one of the nearby buildings hid the girl at her apartment and later helped her sneak outside covered in a long haredi-style robe.

The police were called to the place only after the incident had already been over and the attackers long gone.


Efforts to reestablish coexistence
"My daughter was completely hysterical," said the girl's father. "She came home all beaten up and filthy." He added that he was shocked to discover that the attack was not perpetuated by "bored deprived youth but by adults over 40.

"They kept shouting that girls and boys walking together is promiscuity that spoils their children, but the girls were no way near any boys and the three of them were modestly dressed," he claimed.

Meanwhile the members of the Haredi Community stream in Beit Shemesh present a different version for the state of affairs in town. Moshe, a haredi resident, said that young religious boys and girls often pass through the haredi neighborhood together, and that on occasion yeshiva students have to "drive them away by force."

"Boys and girls laughing together is forbidden. This shouldn't happen in a secular neighborhood, let alone an ultra-Orthodox one," Moshe stated.

Following the recent weeks' events, members of the Zionist religious community have approached the mayor and their local council representatives and have also filed a complaint with the police. Meanwhile, negotiations have also been ongoing between members of both publics in an effort to reach an understanding that would enable coexistence in the mixed town.
Posted by Unknown at 7:42 AM