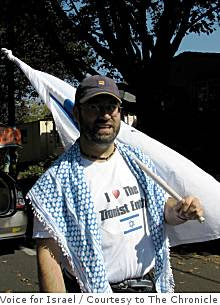 I got several e-mails last night about this suspicious death. It seems that pro-Israel activists are very accident prone—especially concerning falling from great heights to their deaths. It seems to me another California pro-Israel activist had a similar thing happen . . . (does the name Irv Rubin ring a bell?)

I’m sure there is very little evidence to go by in investigating this death, but I am hoping that no stone will go unturned. Perhaps the “touch DNA” method could be used to see if anyone pushed him down the shaft.

In the end, we all know what will happen, though. It will be ruled an “accident” or, worse, a “suicide,” and nothing will be done.


(12-02) 21:16 PST -- It was a bizarre and abrupt way to die for a man who, by all accounts, went at life full-bore and was fit and agile from riding his bicycle everywhere he went.

But as San Francisco police combed over the evidence Tuesday, investigators said this is what appears to have happened: Dr. Daniel J. Kliman, an Alameda physician and one of the Bay Area's foremost pro-Israel activists, stepped into an open elevator shaft by accident last week and died.

His body was found Monday by workers inspecting an elevator in the historic, nine-story Sharon Building at 55 New Montgomery St., where Kliman apparently plunged to his death Nov. 25. As news of the discovery filtered out Tuesday, his supporters and friends were in near disbelief that someone so dynamic could be gone.

"The first words that come to mind for me when I think of Daniel are 'vibrant' and 'alive,' " said Rabbi Judah Dardik of Beth Jacob Congregation, the orthodox synagogue in Oakland where Kliman was an active member. "That's why this is such a shock. Whenever he was in the room, he was such a huge presence."

Co-founded activist group
Kliman, 38, lived near the temple in Oakland and was perhaps best known as co-founder of S.F. Voice for Israel, a 4-year-old organization that vociferously demonstrates on behalf of Israeli causes. He also maintained a practice in Alameda as a doctor of internal medicine and was an ardent proponent of vegetarianism and alternative transportation to cars.

He had been taking Arabic language courses in the Sharon Building for three years and was last seen, investigators said, on the night of Nov. 25, when he went there to attend a class on the seventh floor.

Police Inspector Matt Krimsky said Kliman apparently fell through an open elevator door on the seventh floor, although the building's manager insists the door must have been secured.

The elevator in that shaft was out of order at the time, building manager Brad Bernheim said. By design, doors to a malfunctioning elevator are clamped shut and can be opened only by a mechanic, said Erika Monterroza, spokeswoman for Cal/OSHA.

The details of how Kliman wound up in the shaft are being investigated by police and Cal/OSHA.
Rare but not unheard of

Cal/OSHA regulates elevators but keeps no statistics on accidents in them, Monterroza said. She noted that serious incidents are rare but not unheard of. In 2001, a 2-year-old boy plunged to his death down a five-story shaft in the Tenderloin on Christmas morning when he crawled into an opening between the floor and the elevator.

Monterroza said the Sharon Building's elevator had been inspected Nov. 4 and was found to be sound. It was installed in 1914 and modernized in 1976, she said.

Some in Kliman's activist community wondered Tuesday if he had been killed by someone he loudly opposed in street demonstrations over the years, but Krimsky called that possibility "beyond remote."

"There is no indication of any foul play at this point, even though I've been getting calls from conspiracy theorists from everywhere, even someone who said they had information from a seance," Krimsky said.
Pushing for probe

Faith Meltzer, a member of S.F. Voice for Israel, said she will push police to investigate the matter until all chance of homicide is eliminated.

"It's hard for me to believe this wasn't deliberate," Meltzer said.

However, Penny Rosenwasser, a national board member of Jewish Voice for Peace who found herself on the opposite side of picket lines from Kliman protesting Israel's actions in Palestinian lands, said she found the notion impossible to believe.

"I can't imagine anyone I know doing something like that," she said.

Suicide seemed equally unlikely to those who knew Kliman. Meltzer said any speculation that such a robust man took his own life is ridiculous.

The Arabic class Kliman came to attend on the last night of his life had been canceled, but he apparently didn't know that, said close friend Marshall Schwartz.

"He wanted to learn more about the language, and liked studying there," Schwartz said. Kliman thought of himself as pro-Israel but not anti-Arab, he added, and had even dated an instructor at the language program in the past.

Managers of the program that runs the classes, Pacific Arabic Resources, declined to comment Tuesday.
Planned trip to Israel

Kliman lived alone in Oakland, and when he wasn't heard from for a couple of days, none of his friends found it unusual enough to be alarmed.

"He was supposed to fly to Israel on vacation on Thanksgiving Day, which is why he couldn't take my invitation for Thanksgiving dinner," Schwartz said. "So when he was missing for those days, we all assumed he'd just gone to Israel."

"A lot of us came from a left-leaning background, and suddenly we saw this anti-Semitism in the streets and felt we had to address the issue," Meltzer said. "Dan was an activist, so it was a natural thing for him to do."
Many causes

As a passionate vegetarian, Kliman dined regularly with the group Vegi-Jews in San Francisco. As an alternative transportation advocate, he participated in Critical Mass and similar bicycle protests in St. Louis and San Francisco - an issue that became even more personal to him after his father, Gerald Kliman of Schenectady, N.Y., was killed four years ago in a car wreck.

And as a single gay man, Kliman campaigned against Proposition 8, the state constitutional amendment that voters approved Nov. 4 to ban same-sex marriage.

"It's hard for me to see how he found the time to do what he did," Meltzer said. "He was just a man who absolutely loved life."

Kliman is survived by his mother, Edith Kliman of Schenectady, N.Y., and a brother, Jonathan Kliman of Massachusetts.

Services are pending in Schenectady and locally.

E-mail Kevin Fagan at kfagan@sfchronicle.com.
Posted by Unknown at 5:21 AM