Get Out Of The Way UNIFIL! We Have Some Unfinished Business As Hizbullah Wacko, Nasrallah, Calls for Opening Second Front in Northern Israel 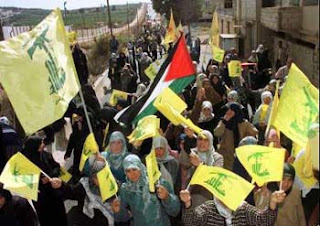 This is what the failure to secure a complete victory has done for us. Our enemies still remember the Lebanon war in which we retreated before we were done. We can’t ever let that happen again. If Hizbullah attacks, then we must face them full force and destroy them—UNIFIL or not. In fact, I would expect that Olmert, Livni, and Peres are on the phone right now encouraging the UNIFIL workers to get the hell out of dodge.

I saw some blog entries earlier asking the question “Why are we calling up reserves? Why do we need reserves right now?” The answer, my friends, is Hizbullah. We need all our reserves because we know he is planning to attack. We knew it last Thursday when Lebanon diffused the ticking rockets on the border.

Our enemies will try to attack us from all sides. Right now the government is in disarray with elections coming, the US president is a lame duck waiting to leave office, and the arabs are desperate to raise funds right now because oil is at a 20 year low and they are, frankly, feeling the pinch. Hizbullah doesn’t want Hamas to get all the money! They will try to cause trouble too. After all, the squeaky wheel gets the grease, right?

If Israel hadn’t been so quick to accept the yoke of the US demands last time, we wouldn’t be having these problems now. Hamas and Hizbullah would be too afraid to mess with Israel. But, unfortunately, we need to fight this war not only to get some semblance of peace, but also to get renewed respect from our enemies.

May Hashm bless our troops with victory, with life, and with luck, and may Israel scare the shit out of everyone in the region once more.

Peace can only be achieved through a commanding, decisive, overwhelming victory which insures deterrence. Without that, we will be fighting every day until the end of time.

(IsraelNN.com) Hizbullah terrorists have vowed to open a second front against Israel in the north in retaliation for the IDF military operation against Hamas terrorists in Gaza.

Terrorist chief Hassan Nasrallah issued a statement on Hizbullah's Al-Manar television station Sunday, vowing that "northern Israel will burn as Gaza is burning." Nasrallah rarely appears in person; he speaks via a video hook-up from his hideout due to fears of assassination by Israeli agents, following the 2006 Second Lebanon War.

Hizbullah officials were quoted in a number of Arabic-language publications on Saturday warning that they would not permit Israel to attack Gaza without retaliating.

Last week seven Katyusha rockets were discovered primed and ready for launching in southern Lebanon, located near the northern border of Israel. All seven were aimed at targets in the Jewish State.

Prime Minister Ehud Olmert, anticipating such a reaction, warned Hizbullah Saturday night in his speech informing the nation about the military operation in Gaza that any "others who may seek to take advantage of the situation would be wise not to."

The last time Israel faced a two-front war was in June 2006, when a military conflict began with a cross-border raid by Hamas terrorists near the Kerem Shalom Crossing with Gaza that resulting in the kidnapping of IDF soldier Gilad Shalit. Two other soldiers were killed and a fourth soldier was critically wounded in the attack. Shalit remains captive in Gaza to this day.

The attack, which was conducted simultaneously with the launch of a barrage of Katyusha rockets at Jewish communities in northern Israel, opened a second front in the military conflict that had began with Gaza, and ignited the 2006 Second Lebanon War.
Posted by Unknown at 7:40 AM