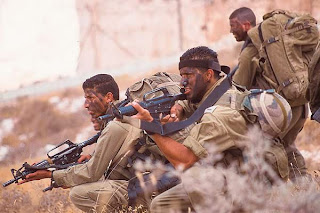 It appears that Israel has suddenly caught on to the PR angle of technology and technology savvy journalists and bloggers. Thank Hashm!

It isn't realtime, but it is very commanding video of some very commanding moments. I don't know about you, but I still love the idea of "good guy -vs- bad guy," and, unlike a lot of people who try to get their comments through my moderation, I have no problem telling the good guys from the bad guys!

I can't believe all these wackos who write to my blog telling me how Israel is in "violation of international law" etc. etc. etc. Pleeeeeeze.

Look, you dimwits! We LEFT GAZA IN ORDER TO PURSUE YOUR MYTHICAL "PEACE" PROCESS AND IT ONLY BROUGHT US VIOLENCE AND WAR. We did it your way, now it is time to do it the RIGHT way.

So, just save your stupid comments for some talkback at CNN, OK? Israel hate doesn't get published on my blog, and I don't care about your weirdo ideas of "Journalistic fairness." There is no such thing, people. Lefties already have CNN, MSNBC, CBS, NBC, ABC, BBC and Al Jazeera.

All I have is Foxnews and this blog. (And Foxnews isn't all that reliable, OK?)

You want equality in the news? Start another right-wing blog! When we have about 5 million right-wing, pro-Israel bloggers, we can start to talk about "equality of the news" OK?

In the midst of its Gaza operations, the IDF is entering yet another conflict zone: the Internet. The Israeli army announced yesterday the creation of its own YouTube channel, through which it will disseminate footage of precision bombing operations in the Gaza Strip, as well as aid distribution and other footage of interest to the international community.

"The blogosphere and new media are another war zone," said IDF Foreign Press Branch head Maj. Avital Leibovich. "We have to be relevant there."

Her sentiment reflects a growing awareness in the Israeli government that part of the failure of the 2006 Second Lebanon War was Israel's lack of readiness for the intense media debate surrounding its operations.

Since the beginning of the Gaza air strikes, Israeli politicians have been appearing regularly on the largest international news networks to defend the IDF. Leibovich's YouTube initiative is another piece of the new media offensive.

Some of the footage might be considered disturbing, such as one video that allegedly depicts men loading rockets onto a pickup truck, to be driven to the border and launched into Israel. The grainy, silent, black-and-white video was transmitted from a plane flying overhead. Moments after the men finish loading their cargo, they are hit by an IAF air strike.

Leibovich was not overly concerned. "The intelligent audience watching the footage will know that people killed did not have peaceful intentions toward Israel," she said. "I don't believe they'll be disturbed."

"The important thing is to get the truth out there," she added, noting that her office, in addition to curating the YouTube channel, had delivered multiple private briefings to bloggers around the world. She said that members of her department were also getting ready to start their own "vlogs," a new media term for regularly posting videos of oneself speaking one's mind in diary form.

Members of the IDF's various foreign desks intend to use these vlogs to discuss a number of aspects of the conflict, in both English and Arabic, in a personal setting that they hope will overcome the stiffness of television news.

The Youtube channel may be accessed at: http://www.youtube.com/user/idfnadesk
Posted by Unknown at 6:10 AM