Don't waste compassion on the Gazans. The people in Gaza elected Hamas. They did nothing to protest the rockets. Whatever they get, they deserve. 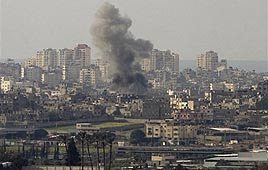 While we are all sitting watching the newscasters who, by the way, completely ignored the story of rockets falling on the heads of Israeli school children, elderly, farmers, business people, and factory workers--lets all remember this:

The people in Gaza elected Hamas. They have supported the goals of Hamas (including "wiping Israel from the face of the map"). They have protected the Hamas leadship, and they have marched in rallies in support of Hamas. When Israel told them to stop the rocket fire or the IDF would come down of them, they did nothing to protest the rocket fire. When the rocket fire increased, they still did nothing.

They were the ones who said the cease fire was over (as if it ever existed in the first place!)

Whatever they get, they deserve.

And all those little kids? I'm sorry. I just see "Jihadists in Training." I dont' see any little kids. They aren't growing up in innocence and sweetness. They are growing up steeped in hate for my people. They watch TV shows about killing Jews and pose in suicide-bomber suits.

And when the newscasters spew the "civilian casualty" line--please remember that Gaza doesn't have an official military so, technically, they are all civilians. Just substitute the world "terrorist" for "civilian" as you hear each report and you should be fine.

In the heaviest military strike against the Gaza Strip since the 1967 Six Day War, the Israel Air Force bombed over 170 targets on Saturday, killing more than 225 Palestinians, as Israel launched "Operation Cast Lead," aimed at putting a stop to Hamas rocket attacks against the South.

In response, 80 Kassam rockets, Grad-model Katyushas and mortar shells pounded southern Israel throughout the day. One rocket scored a direct hit on an apartment building in Netivot, killing 58-year-old Beber Vaknin and wounding several others.

Hamas chief Khaled Mashaal called on West Bank residents to rise up against Israel in a renewed intifada.

Soldiers from the Paratroop and Golani Brigades were deployed along the Gaza border ahead of the possible ground offensive. Defense officials said that anyone and anything identified with Hamas was a potential target.

At least two senior Hamas commanders were killed in the air strikes. One was identified as Maj.-Gen. Tawfiq Jabar, commander of the Gaza Strip police, who was killed at the Gaza Police Academy during a graduation ceremony; 70-80 Hamas operatives were reported killed in that attack.

Officials said that Israel did not plan on conquering the Gaza Strip or toppling the Hamas regime, but would likely continue the air strikes together with limited ground assaults against Hamas infrastructure and Kassam launch sites.

"We will not stop until Hamas halts its rocket attacks and terrorist activity," one senior defense official said.

"Our purpose is to hit Hamas in such a way that will force it to halt any firing and other hostile activities against Israeli citizens and against the IDF," Barak said. "We will do everything it takes to defend our citizens and bring about a significantly improved situation along our border."

"The goal of the operation was to shock, awe and deceive the Palestinians," a senior IDF officer said Saturday, referring to Barak's decision to open the crossings on Friday - done to deceive Hamas into believing that Israel was delaying a military response to the rocket attacks.

Reports that the cabinet planned to convene on Sunday to discuss the situation in Gaza were also aimed at deceiving Hamas.

The air strikes caused widespread panic and confusion in Gaza. Black clouds of smoke rose above the Strip, ruled by Hamas since June 2007. The IDF said it had avoided striking at targets next to schools and inside densely-populated apartment buildings, but urged Gazans to stay away from Hamas infrastructure.

The IDF Central Command also went on high alert out of concern that Hamas terrorists would try to infiltrate Israeli cities to perpetrate suicide bombings. Military sources said there was also worry that Hamas would try to kidnap soldiers in the West Bank and that Hizbullah might attack along the northern border.

Olmert cautioned Israel's enemies against trying to take advantage of the fact that Israel was busy in Gaza.

In a televised speech, Mashaal warned Israel that it would not achieve by fighting what it had been unable to achieve through diplomacy.

While the Damascus-based Hamas leader maintained that his organization was interested in renewing the cease-fire with Israel, he said this would only be possible if Israel and opened all crossings in and out of the Strip.

Mashaal defended his group's actions and the continued rocket attacks on Israel that led to the IAF offensive, saying Israel - and not Hamas - was responsible for the renewed bloodshed.
Posted by Unknown at 3:34 PM