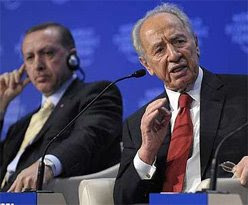 OK, so it is now official. Erdogan wants to destroy the relationship between Turkey and Israel. He wants to make it impossible for Israel to see anything of their old friends in Turkey, and it is a very bad turn of events.

They are, unfortunately, following in the footsteps of their brothers in Islam and exhibiting, once more, that Islam cannot coexist with anyone, and certainly cannot value the blessings of democracy and openness.

Erdogan is a Moslem, and when he won the Prime Minister position in Turkey, there was a great fear he would turn the comparatively secular, democratic, and free nation of Turkey into an Islamic regime.

Unfortunately, those fears are starting to bear fruit.

It is with a heavy heart that I think of those dear Turkish Jews that have so many close ties to their brothers and sisters in Israel, the US, and Europe. I am hoping they will quickly find their way out of that nation.

Israeli-Turkish relations took a dramatic turn for the worse in Davos Thursday night when Turkish Prime Minister Recep Tayyip Erdogan stormed red-faced off the stage at the World Economic Forum after sparring with President Shimon Peres over the fighting in Gaza.

Erdogan was angry over being cut off by a panel moderator after listening to an impassioned monologue by Peres defending Operation Cast Lead.

Peres's defense was prompted by harsh criticism leveled at Israel not only by Erdogan, but also by the two other panelists, Arab League head Amr Moussa and UN Secretary-General Ban Ki-moon.

"You are killing people," Erdogan declared to Peres.

However, a finger-pointing Peres told Erdogan that he would have done the same if rockets had been hitting Istanbul.

"Do you understand the meaning of a situation where hundreds of rockets are falling a day on women and children who cannot sleep quietly, who need to sleep in shelters? What is the matter with you? You don't understand, and I am not prepared for lies."

"Only a minute," Ignatius replied.

Speaking in Turkish, Erdogan said, "I remember two former prime ministers in your country who said they felt very happy when they were able to enter Palestine on tanks. I find it very sad that people applaud what you said. There have been many people killed. And I think that it is very wrong and it's not humanitarian."

"We can't start the debate again. We just don't have time," Ignatius said.

However, Ignatius responded, "We really do need to get people to dinner."

The confrontation saw Peres and Erdogan raise their voices - highly unusual at the elite gathering of corporate and world leaders, which is usually marked by learned consensus-seeking and polite dialogue.

Afterward, forum founder Klaus Schwab huddled with Erdogan in a corner of the Congress Center.

"I have known Shimon Peres for many years and I also know Erdogan. I have never seen Shimon Peres so passionate as he was today. I think he felt Israel was being attacked by so many in the international community. He felt isolated," said former Norwegian prime minister Kjell Magne Bondevik.

"I was very sad that Erdogan left. This was an expression of how difficult this situation is," he added.

"Mr. Erdogan said what he wanted to say, and then he left. That's all. He was right," Moussa said.

Of Israel, he said, "They don't listen."

Erdogan brushed past reporters outside the hall. His wife appeared upset.

"All Peres said was a lie. It was unacceptable," she said, eyes glistening.

The unpleasant incident came at a meeting that both Israeli and Turkish diplomatic officials thought could help improve relations between the two countries - relations that have soured considerably due to Erdogan's extremely harsh criticism since the start of Operation Cast Lead.

"Erdogan's actions in Davos show that he doesn't want to miss an opportunity to further harm Turkish-Israeli relations," sources in Jerusalem said in response to the incident. The sources said that Erdogan's behavior on the Davos stage obviously would not help Turkey's attempts to be seen in Europe as a rational and constructive actor on the international stage.

"Israel's strategic relationship with Turkey is important to us, but it is no less important to Turkey," the official said. "Erdogan is harming his own interests."

The official said that Israel was growing increasingly "tired" of Erdogan's tirades, and was unlikely to make any more efforts to "chase after the Turks."

The official dismissed as no longer valid the argument that Erdogan's diatribes - he has called for Israel to be barred from the UN and said its actions were inhuman and would bring it to self-destruction - were the result of domestic considerations, and that he was playing to his strong Islamic base before the Turkish municipal elections in March.

The incident came even as Turkish Foreign Minister Ali Babacan appeared over the last couple of days to be tempering Turkish rhetoric and taking a more conciliatory approach. On Wednesday he called on Hamas to abandon violence.

The Foreign Ministry had no response to the incident, an apparent indication that it did not want to exacerbate the situation.
Posted by Unknown at 7:41 PM