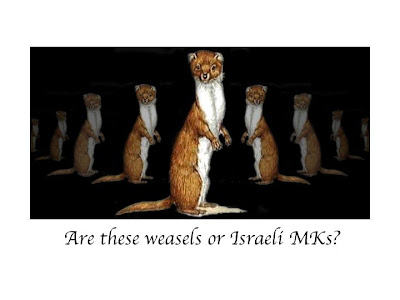 I have been meaning to write to Rabbi Slifkin, the ZooTorah Rabbi, to ask him the difference in species between weasels and Israeli MKs, but it looks like Matot Arim has devised a better way to define the difference.

Matot Arim designed an oath for the MKs to sign, which pledges that the MKs will not aid the creation of a "palestinian" state in Israel.

UTJ's Meir Porush should also be commended AS THE ONLY UTJ MEMBER TO SIGN. The rest of the MKs and their parties should be ashamed of themselves. They are siding with our enemies and will go down in history as co-conspirators in the attempted destruction of Israel.

I hope the electorate is paying close attention.

M
-----
Likud chairman Binyamin Netanyahu and three quarters of the Likud's candidates declined to sign a loyalty oath ruling out a Palestinian state that was distributed to all the parties on the Right.
http://www.jpost.com/servlet/Satellite?cid=1233050185988&pagename=JPost%2FJPArticle%2FShowFull

The oath, distributed by the Matot Arim organization, included a vow not to lend a hand to the formation of a Palestinian state.

Shas chairman Eli Yishai signed the document on behalf of his party. Meir Porush was the only United Torah Judaism MK who made the pledge.

The only candidates in the Likud's top 28 who signed the pledge or were tied to previous such pledges were Moshe Ya'alon, Yuval Steinitz, Ze'ev Elkin, Ayoub Kara, Tzipi Hotovely, Yariv Levin and Danny Danon.

A similar document was distributed when former Prime Minister Ariel Sharon's government was formed. While there were MKs who signed it but later supported the Gaza Strip disengagement, and MKs who refused to sign it but later opposed the move, Matot Arim spokeswoman Susie Dym said there had been a direct correlation between who signed and how they voted.

Ironically, Interior Minister Meir Sheetrit attacked the Likud for opposing a Palestinian state at a Kadima press conference on Monday.

He called on reporters to do exactly what Matot Arim did and ask the parties whether they support a Palestinian state.

Netanyahu addressed the matter in a meeting with religious-Zionist Likud supporters in Jerusalem on Monday. At the meeting, he ruled out future unilateral withdrawals. He warned about the creation of a Palestinian state but declined to rule it out.

"Any Palestinian state that would be formed under the current conditions would become an Iranian state as we saw happen in Gaza," Netanyahu said. "[But] we all must work to advance peace while considering reality."

Netanyahu's associates said he did not want to govern a single Palestinian, but under certain circumstances, he would agree to a state with limited sovereignty and powers.

Regarding building in West Bank settlements, they said his views were no different than they were when he was prime minister, when he declined to build new settlements but allowed natural growth in those already existing.

"I have no intention of building new settlements in the West Bank," Netanyahu said in a meeting with the Quartet's Middle East envoy Tony Blair on Sunday. "But like all the governments there have been until now, I will have to meet the needs of natural growth in the population. I will not be able to choke the settlements," he said.
Posted by Unknown at 8:02 AM