According to the French Websites I searched, Rabbi Jonathan Guez was teaching four people in the synagogue when the attack occured, but no one was, Thank G-d, injured. The car was pushed through the synagogue gates by another car with three people in it. The attack was caught on the security cameras at the synagogue.

I'm afraid that the Nazis of Germany have given way to the Nazis of Arabia in Europe. The former colonial subjects of all those European countries have applied for

citizenship under the nearly open-door policies in Europe and have taken over most of the country.

France is a clear example of this. Two years ago we saw the the horrible murder of a young Jewish man in France and the riots which have sprung up almost annually like some horrible flaming weed, we have watched the constant desecration of our cemeteries and synagogues, the shooting, this weekend, of a Algerian Jewish doctor whose great crime was helping poor arabs, and now this very public, very obvious attack on a Toulouse synagogue.

The French police have been trying their best, but they are few and the radicals are many. I'm sure it must seem like they are in the midst of a forest fire armed only with one small garden hose.

It isn't only France. In Denmark, in England, in Germany, in all of the former Soviet Union, we are under attack. Unfortunately, in America too.

The situation in Europe is unlikely to get better. It is probably going to get much much worse. Why? Because the indigenous people of Europe have stopped having children, but the immigrant population has not. "Mohamed" was the second most popular name in England in 2007, for example.

A lot of the problem is that the government of those European countries are under tremendous pressure to release arab suspects, declare their crimes as "not hate related" or not even try to find those responsible.

Now they are trying to say that the anti-semitic attacks are because of the Gaza situation, and they aren't directed at "Jews" they are directed at "Israel-sympathizers" (read "Jews").

This is a convenient out for them, but it isn't very convincing, especially when you see the level of attack have been increasing steadily over the past ten years.

(IsraelNN.com) Terrorists crashed two vehicles, one loaded with firebombs, into the facade of a synagogue in southwestern France on Monday night. No injuries were reported; Police said they were investigating the incident, but that no arrests have yet been made.

However, the attack is the second serious terrorist attack on Jewish targets in Europe in less than a week.

According to the French news agency AFP, unidentified attackers rammed a burning car into the gates of a Toulouse synagogue while a lecture was underway inside. A second vehicle, apparently used to push the flaming car into the synagogue, was found to hold several more firebombs. The attempted bombing damaged the synagogue, but the dozen or so people inside escaped unharmed.

AFP quoted a government spokeswoman as saying that there have been no claims of responsibility as of Tuesday morning. Police said they were investigating the incident, but that no arrests have yet been made. The attack was condemned by the National Bureau for Vigilance against Anti-Semitism and other anti-racist organizations. French radio has been repeatedly linking the Toulouse attack to the ongoing Israeli counter-terrorism operation in Gaza. 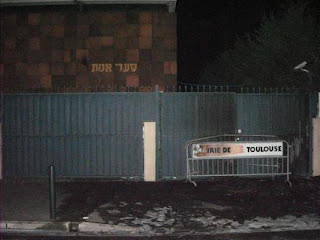 Security analysts from the Israel- and U.S.-based Institute for Terrorism Research and Response (ITRR) noted that the attack takes on ominous significance as it occurred on the same day as the start of a Paris trial of an al-Qaeda leader accused of plotting a bombing of a Tunisian synagogue. That attack, perpetrated in 2002, also involved a car rigged with fuel-based explosives set off outside the targeted house of worship. Twenty-one people were killed in the fireball. The accused, Khaled Sheikh Muhammad, is also allegedly the mastermind of the 9/11 attacks in the United States.

Second 'Lone-Wolf' Attack in Europe
The Toulouse car and firebomb assault was the second terrorist attack on European Jews in less than a week. On Wednesday of last week an unknown number of terrorists opened fire on a group of Israelis at a mall in Odense, Denmark. Two people were injured in the shooting. The perpetrators escaped in a black car, which was later found abandoned at a nearby college. Police later succeeded in tracking down one suspect in the shooting, identified as an Arab living in Denmark.

In addition to the foregoing, the British Jewish community's Communal Security Trust (CST) released for publication on Tuesday information about an act of anti-Semitic vandalism against a London synagogue. According to the CST, "a synagogue in Brondesbury, London, suffered an arson attack on the night of 4-5 January 2009. The attackers attempted to smash a window, but were prevented from doing so by the security film. They then appear to have attempted to set the front door alight with petrol, causing some damage to the exterior of the premises. Police, CST and fire brigade attended the scene."

In another arson attempt, a firebomb was thrown at a synagogue in Brussels, Belgium, on Monday. The building was somewhat damaged.

Aside from these apparently "lone-wolf" attacks - perpetrated by individuals acting on their own or in ad-hoc cells - against Jewish targets around the world, Hamas, Hizbullah and Al-Qaeda have been promoting worldwide "sympathetic attacks" in response to the Israeli Gaza campaign. ITRR has cited intercepted communications from the al-Qaeda-affiliated Islamic State of Iraq (ISI) and from al-Qaeda in Islamic North Africa calling for Muslims to attack Jews worldwide.
Posted by Unknown at 6:42 AM