Children Locked In Houses As Human Shields, Inflated Numbers of Dead Civilians--It's Not Just the IDF Reporting This, It's The Gazans THEMSELVES!!

We know they use human shields. We know they don’t care about life. We know they aren’t there to take care of the children, women, and elderly of Gaza. They are terrorists. Their goal is to fight dirty, kill people, and try to make Israel look as bad as possible.

When the IDF was surrounding Gaza, did Hamas shoot their rockets at our military? No.

They chose to shoot their rockets at civilian targets.

Now it is not just the IDF that is saying this. According to the Italian newspaper, the arabs, themselves, are saying this.

Congratulations, all you anti-Jewish radicals dancing in the streets with scarves on your heads and Jewish-Stars-Made-Into-Swastikas. We told you that the IDF were the real liberators of the arab people, protectors of the innocent civilians. But, your hate of Jews was so fervent and your wish to be a proper dhimmi was so ardent, that you couldn’t help yourself! You screamed and howled and waved the flags of anti-Semitism. You drank the koolaid of hate, and you were used by the terrorists--you were their patsy (by the way, most of you liberal secularist, feminist, and gay protestors wouldn’t count as dhimmis at all. You have to be a true believer in G-d to qualify. Most of you would be tried by Shariah, found to be guilty of blasphemy or homosexuality, or both, and jailed or executed. And all you women out there with the T-Shirts and jeans—I hope you don’t mind spending the rest of your life in a burqua with no education, no rights, and no ability to even speak to a man who isn’t married to you. So much for feminism!). 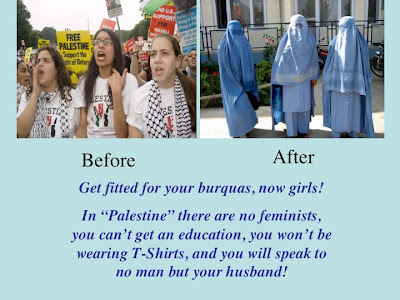 I hope you, the great unwashed, know that if those Hamas terrorists saw you, they would probably laugh for a moment at your stupidity and ignorance before they shot you dead.

Wake up, people! They don’t care if you protested. You are just to be used against the Jews and sacrificed. You are just a stepping stone in the path to world domination and forced conversion of the masses. I know you don’t believe me. You are too busy trying to please your arab masters.


The Israel Defense Forces' Gaza Division Commander on Thursday branded Hamas' use of women and children during Israel's recent offensive in the coastal strip as "monstrous" and "inhumane."

Brig. Gen. Eyal Eisenberg said the civilians were sent by Hamas to transfer weapons to gunmen during the offensive. He also accused the Islamist militant group of booby-trapping many of the civilians' homes.

"Entire families in Gaza lived on top of a barrel of explosives for months without knowing," Eisenberg said.

More than 1,250 Palestinians were reportedly killed during Israel's offensive against Hamas in the coastal territory. According to estimates by Gaza officials, more than half of the Palestinian dead were civilians.

Israel has been heavily criticized for the high number of Palestinian civilian casualties in the operation. Eisenberg, however, asserted that Israel Defense Forces soldiers adhered to moral principles while fighting in Gaza.

Palestinian civilians, meanwhile, have accused Hamas of forcing them to stay in homes from which gunmen shot at Israeli soldiers during the recent hostilities in Gaza, the Italian newspaper Corriere della Sera reported Thursday.

The Italian paper also quoted a doctor at Gaza City's Shifa Hospital as disputing the number of Palestinians said to have been killed in the campaign.

13 Israelis were also killed during the 3-week operation, which was aimed at halting rocket fire on southern Israel and destroying Hamas' infrastructure.

The Gaza doctor was further quoted as saying: "Perhaps it is like Jenin in 2002. At the beginning they spoke about 1,500 dead, and at the end it turned out to be only 54 - of whom 45 were militants."

He was referring to the Israel Defense Forces battle with Palestinian militants in the West Bank town that took place during Operation Defensive Shield at the height of the second intifada.
Posted by Unknown at 10:37 AM