Take a Moment to Honor Victims of Terror, Talia and Binyamin Kahane, on the eighth anniversary of their deaths 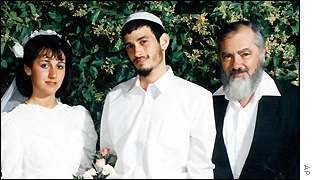 I can't believe it has been eight years from this tragic event.

I think I will be lighting a candle tonight for this heroic couple. My prayer will go like this:

"Blessed be the lovers of Eretz Yisrael, their children, and their children's children who have never forgotten their heritage and their obligations to G-d. May their children be blessed with long and happy lives, and may they grow strong in their love of Israel, like all the generations of their family before them."

M
-----
Eighth Anniversary of the Murder of Binyamin and Talia Kahane
http://www.israelnationalnews.com/News/News.aspx/129178
by Avraham Zuroff
(IsraelNN.com)

Thursday marks the eighth anniversary of the killing of Binyamin Kahane and his wife, Talia, who were murdered in a terrorist attack on the way to their Tapuach home. Binyamin Kahane was the son of the late Rabbi Meir Kahane, who was assassinated by an Arab terrorist’s gunshot in a Manhattan hotel in 1990.

Michael Ben-Ari, who is in the number four spot of the National Union party list, attended the services. Ben-Ari was a close friend and study partner of Rabbi Binyamin Kahane at the Merkaz HaRav Yeshiva. He subsequently founded together with his study partner the Yeshiva of the Jewish Idea, in memory of Binyamin’s father, Rabbi Meir Kahane.

Gershon Masika stated at the memorial service that both father and son were men of truth, self-sacrifice, and had true love of the Jewish People.

Referring to the Intifada and the current security situation in Gaza, Masika stated, “Leaders who hide from the truth end up with situations like we have today.”

History Repeats Itself
On Thursday morning, the Kahane family, together with close friends, visited the graves of Binyamin and Tali Kahane at the Har Menuchot cemetery in Jerusalem. At the cemetery, one of the family members recalled the history of the Kahane family in the Land of Israel.


“Apart from our national vendetta, the Kahane family have their own accounting. Exactly 70 years before Binyamin and Talia were murdered by Arabs, a Kahane couple from Tzfat, Rabbi Mordechai and Tziporah Kahane were murdered on the road from Haifa to Tzfat, along with seven other Jews in 1929,” a family member told the crowd.

The 1929 murder of the Kahane couple is what prompted Shlomo Ben-Yosef to shoot an Arab. Ben-Yosef was later hanged by the British.

“We should now pray for the safety and success of the IDF soldiers who are standing at the gates of Gaza and avenge the deaths of the Kahane family and all of the victims of the Arab violence,” a family member added.

A memorial concert performed by Yitzchak Fuchs, along with speeches from dignitaries memorializing Binyamin and Talia Kahane will take place at 8:00 p.m. Saturday at Kfar Tapuach.

Binyamin and Talia Kahane were murdered eight years ago on Sunday morning, the 5th of Tevet (December 31, '00) in a roadside ambush, just south of Ofra, a community north of Jerusalem.

Five of the Kahane daughters were in the vehicle. Although they did not get hurt by bullet fire, they were hurt after the car lost control as a result of the shooting of their father, who was driving the car at the time. The surviving son, Meir David, was dropped off to his school before his parents were ambushed.

The children are being raised by Talia Kahane’s sister, Rayah and husband, David Bloch in the Samarian town of Tapuach.
Posted by Unknown at 5:48 PM