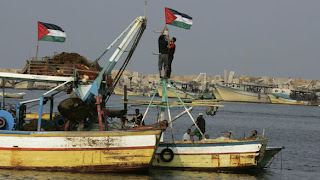 I just love how the Jerusalem Post loves to make Israel evil. Either that, or they are just plain stupid. I would like to give the Jerusalem Post the benefit of the doubt and assume they just like Israel to look evil. I, of course, have some stunning analysis to follow, but First look at this story:

A Navy boat off the shores of Gaza City shot and wounded a man and a girl on Thursday morning, according to a Palestinian medical official.

The IDF confirmed the incident, and said it was firing to deter a Palestinian fishing vessel that had strayed off-limits.

Between 12 p.m. and 2 p.m. Thursday, the Navy partially lifted the naval blockade so as to allow Palestinian fishermen to fish.

Moaiya Hassanain, a Palestinian doctor, said a shell fired by the boat hit a house in a beach-side refugee camp, and that two who were wounded were walking in the street.

Another shell landed 100 yards (meters) away in an empty area near a UN aid distribution center.

Gunboats have been firing off Gaza's shore for several days despite a cease-fire that has ended a three-week Israeli offensive against Gaza rocket operations aimed at Israel.

---
OK, I understand that innocent people were harmed, and this is a tragedy, no question. However, there are a few things to look closely at before you start thinking to yourself “Wow, Israel is SO aggressive against those ‘poor Palestinian people.’”

The story tells us that “Gunboats have been firing off Gaza's shore for several days despite a cease-fire that has ended a three-week Israeli offensive against Gaza rocket operations aimed at Israel.” Wow. Another example of those evil Jews, right?

Look closer, my friends. Earlier in the story it says, “a shell fired by the boat hit a house in a beach-side refugee camp.”

Hmmm. Interesting, don’t you think? I guess Hamas wants those refugees to have a nice seaside view, and Israel destroyed their vacation plans by putting some nasty gunboats out there. This couldn’t possibly be a clear indication of the use of human shields by Hamas, right?

Now, The Jerusalem Post also tells us that those mean Israeli Navy people have been “firing off Gaza's shore for several days despite a cease-fire.” Clearly, The Jerusalem Post would have us believe, Israel is specifically targeting the ‘poor Palestinian people.’ So EVIL!!

There couldn’t possibly be a REASON why Israel might be shooting at a fisherman, right?

US and Egyptian warships were scouring the Gulf of Aden and Red Sea Tuesday, Jan. 20 to waylay an Iranian freighter carrying scores of heavy rockets for delivery to Hamas. DEBKAfile's exclusive sources report they were acting on intelligence that a ship loaded with an estimated 60 tons of arms to replenish Hamas' depleted war stocks had set out from the Iranian Persian Gulf port of Bandar Abbas on Jan. 17.

Our sources reveal that the arms-smuggling vessel started its voyage as the Iran-Hedayat and changed its name in mid sea to Famagustus registered to Panama. The captain was ordered by the Iranian Revolutionary Guards to unload its cargo at a smugglers cove on the southeastern coast of Sinai opposite the Gulf of Suez, to be picked up by armed Bedouin gangs and moved to El Arish in northern Sinai. From there the contraband rockets were to be slipped gradually into the Gaza Strip.

The cargo consists of 50 Fajr rockets whose range is 50-75 km, scores of heavy Grad rockets, new, improved launchers whose angle of fire can be precisely adjusted, tons of high-quality explosives, submachine guns, rifles and pistols and armor-piercing missiles and shells (of types used successfully by Hizballah against Israeli tanks in 2006).

The shipment, the largest Tehran has ever consigned to the Palestinian Hamas in Gaza, includes also a large number of anti-personnel and anti-vehicle mines, equipment for assembling roadside bombs and advanced communications and night vision gear.

The Iranian ship aroused suspicions when Western spy satellites and surveillance stations spotted its change of registration after entering the Sea of Oman. Closer observation identified the cargo as a huge arms shipment.
---

But what could that possibly have to do with a ‘poor Palestinian fisherman’? (It’s very suspicious, by the way, that I can figure this out, but the high and mighty reporters of the Jerusalem Post seem to be completely clueless. It couldn’t possibly be obvious bias by our dear newspaper, right?)

DEBKAfile's military sources report that Israel relayed a warning to Hamas through Egypt that any more Iranian or Syrian attempts to smuggle rockets or other heavy weapons into Gaza by land or by sea would be deemed a breach of the ceasefire and generate Israeli military action to stop them.

Our sources further disclose that Iranian marine experts and engineers, after making a study of submerged Mediterranean currents, have designed special containers for the clandestine shipment of arms to Gaza by sea.

The containers are dropped from freighters out at sea, plummet to a calculated depth and carried by the undercurrent to a point close to the Gaza shore. A built-in mechanism then shoots them up to the surface, where Gazan fishermen pick up the bobbing containers. A marine expert on deck of these Iranian freighters guides the captain to the exact location for dropping the container.

This is only one of Tehran's covert tricks for shipping arms to Gaza. To beat them, the United States, Israel and Egypt will need to set a special military-marine intelligence outfit.

Iran's huge investment of money and brainpower in this task is a measure of the strategic importance it attaches to its ties with Hamas and through them its presence in Gaza.
---

OK, so we have an Iranian shipment of arms on their way to Hamas during the Hudna imposed by our gullible traitorous government ministers, an international hunt for those arms and that boat, suspicion that a fisherman will be used to pick up the arms for delivery to Hamas, and a fisherman who has decided to go outside the bounds that the IDF navy has set up.

That fishing boat can’t possible have anything to do with these arms, right?

The fisherman will survive without fishing, but they want to risk their lives to go fishing anyway. I guess they are REALLY hungry for fish—it must be!. After all, weren’t we just told there was a UN food distribution center right there on the beach where they are leaving to go fishing?

Now, what in heaven would those fisherman want to fish for in such a dangerous environment, with Israeli gunboats just off the coast firing (if you want to believe the Jerusalem Post’s strange take on this) indiscriminately at the ‘Poor Palestian fishermen.’

And, why would the IDF want them to go out there, what with all their worry about fisherman picking up the arms.

Could it be, my dear reader, that the IDF doesn’t know where the arms are, but the fishermen do. The IDF knows they know, and they are waiting for them to take the bait and go get the arms. This way, they know where they are.

So . . . I am guessing that the fishing boat in question was one that was sent to pick up the arms. They needed to get outside the boundry set up by the IDF so that they could do that. They waited until they thought the IDF wasn’t looking and raced to the spot where they knew the arms would be. The IDF was waiting for this, shot some shells at them, and will now, G-d willing, go pick up the Iranian arms from the bottom of the ocean, preventing Hamas from rearming and restarting the war.

By the way, such an action PROTECTS the innocent from another IDF offensive, right?

After all, it is Hamas who is putting the civilians purposefully at risk, not the IDF.