Written During Day 19 of the Gaza War 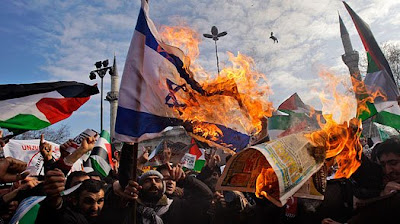 (January 14, 2009) As the Gaza war continues and Israel fights to protect itself from Hamas, Turkish citizens and now Turkish politicians are demonstrating against both the State of Israel and the Jewish people. Long a country that was good to the Jews and good for the Jews, Turkey often celebrates its friendly ties to the Jewish people. Yet, just as geographical borders change with time, so does society-at-large.

Change can be seen on a daily basis in the Turkish newspapers which are espousing headlines and using photos which up until recently were only used by right-wing religious factions. Today, newspapers from the left, the right, the secular and the religious, are all reporting on 'massacres' and how Israel 'targets children.' Not a single day goes by without photos of dead Palestinian Arab children being in the papers and how the Zionists, the Jews, are attacking the Muslim children. 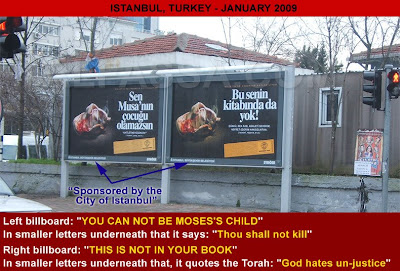 Contrary to what is being written in the Turkish papers and reported on the world news, Israel is not committing any sort of holocaust or genocide against Arabs or Muslims in Gaza. Hamas is a body of people working together to launch missiles into Israel which is causing great harm to Israeli citizens, and it would not matter if Hamas were made up of Mormons, Episcopalians, Catholics or Hindus! The war against Hamas is not a religious war, it is not some sort of war against Muslims, it is a war against a rouge army which is attacking a sovereign country that has a responsibility to protect its citizens and its land. This begs the question, why would the Turks, a nation made up of Muslims, be so angry anyway? In the past, Turks fought their fellow Muslims, this occurred many times in history, the most memorable being the 16th century battle against the Mamluk Arabs in Aleppo, Damascus, Jerusalem and down into Egypt. The Ottoman Turks utterly destroyed that enemy Arab army. Ironically, some of that fighting took place in Gaza itself!

Anti-Semitic sentiment was recently fueled in Turkey when its 'moderate' Prime Minister, Recep Tayyip Erdogan, declared: "Allah's punishment for Israel's inhumane actions will lead to its destruction." While it sounds like a strong statement, the radicals in Istanbul have no great love for their Prime Minister, they see him as being weak. This is the same Prime Minister who upon receiving an award from the Anti-Defamation League (ADL) in 2005, stated that “Antisemitism is a Disease of [the] Mind" and that "Anti-Semitism Has No Place in Turkey.” Even so, that speech and these words were never posted on the Turkish government's Website. According to a Turkish reporter cited by MEMRI, the Prime Minister would purportedly have looked like a Zionist if his speech was published. Islamic radicals would love to see the Turkish Prime Minister and his government overthrown, this was witnessed at a recent anti-Israel protest in Istanbul, where marchers in faux-bloodied shirts held signs showing Prime Minister Erdogan shaking hands with Israeli Prime Minister Olmert, the caption saying, "These are our killers." 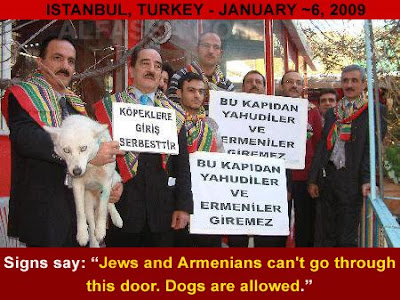 Nonetheless, as the Turkish Prime Minister openly condemns Israel's war against the Hamas Arab terrorist organization in Gaza, the mainstream Turkish people are having further rhetoric thrown their way by an alarming influx of radical Islamic fanatics which have been increasing in number over the past decade. Holding rallies and marches against the Jewish state, can now also be counted a high numbers of secularists too; the protests seem now to be inclusive of all of Turkish society. The rallies draw tens of thousands and they are changing the paradigm of Turkey from a moderate Muslim country, deeply proud of its secular tradition, to a nation which more and more resembles a radical Arab country with a deep hatred for the Jews, the famous hatred which was passed onto them from the Nazis. Turkey abolished Islamic Law some 80 years ago, but now, a large and growing group is calling for its return, and those same people that are calling for it possess a virulent hatred of the Jewish people.

The Anatolia News Agency reported that Turkish Education Minister Hüseyin Çelik issued a directive this week calling on Turkish school students around the country to stand in silence for one minute. He said, "With this stand in silence the atrocities in Palestine are condemned. This is also an act of solidarity with the Palestinian people." News agencies also published photos of a teary-eyed Prime Minister Erdogan visiting wounded Palestinian Arabs that were hospitalized in the Turkish capital. This type of propaganda does nothing to objectively examine what really is taking place in Gaza, what it does do is provide a misguided lesson to a new generation of young Turkish children which will grow up thinking that Israel and the Jews are evil savages, not a civilized people attempting to put a halt to daily attacks.

As of late, Turkish society has exploded with an influx of anti-Jewish and anti-Israel rhetoric, this included billboards being posted with anti-Israel and anti-Jewish expressions. Private firms are also posting anti-Israeli and anti-Jewish statements on their Websites. Bardak, a Turkish company which manufactures custom coffee mugs for Toshiba, HSBC, Cargill, Acer and Canon, has a phrase across its front page: "JEWS YOU ARE GOING TO PAY EVERYTHING THAT YOU ARE COMMITTING."

Jews arrived en masse to Turkey in the 15th century, when the most powerful nation in the world, Spain, openly and publicly threatened genocide against the Jewish people for the stated crime of practicing their own religion-Judaism. It was the Turkish Sultan, Mehemet, who invited the Jews when he said:

The Jews happily recall that it was a religious Muslim government, the Turks of the Ottoman Empire, which stepped in and saved them from destruction in 1492. Even though Jews lived as second-class citizens, the Turks never set in place specific targeted anti-Jewish policies such as those that existed in Christian Europe. It's a sad reality that today, young Turkish Muslims don't know the long history of the relationship between the Jews which also proudly called (and do call) themselves 'Turks', and that they are currently being brain-washed into thinking that the Jewish nation and its people are some sort of evil beings. Jews want nothing more than what Ataturk, the beloved founder of the Turkish Republic desired, "Peace at Home, Peace in the World."
Posted by Unknown at 1:29 PM