Better Watch Your Back, Hamas. I Wouldn't Sleep Too Soundly If I Were You . . . 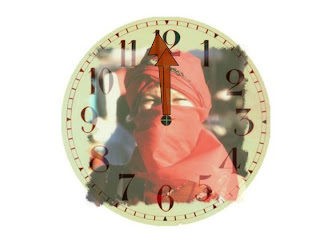 Those idiot Hamas crazies, who want to commit communal suicide, are continually breaking the cease-fire. They are sending mortars, rockets, shooting at our soldiers, and now planting bombs on the border that killed one of our troops.

Debka is reporting that there is a build-up and some serious plans under consideration at this time.

I'm not sure if anything will happen though. The only people more bent upon communal suicide than Hamas seem to be the government ministers in Israel.

Can you believe that Olmert was going to release 1,300 more Hamas terrorists as part of the "cease fire" agreement with those monsters?

There seems no end to his stupidity.


The Israeli soldier was killed and three others were injured, one seriously, Tuesday, Jan. 27, when Palestinians detonated a large explosive device against a routine Israeli military patrol near the Kissufim crossing a week after Israeli troops exited the Gaza Strip. Eight hours later, an Israeli air strike killed a Hamas operative involved in the attack on a motorbike near Khan Younis.

According to those sources, Hamas initiated the clash for the benefit of US president Barack Obama's Middle East envoy George Mitchell the day before he arrives for his first visit to the region. It was a reminder to Washington that hostilities in Gaza would not end so long as Washington cold-shoulders Hamas. The Palestinian Islamist terrorists will probably continue their attacks including resumed missile fire against Israel, to which the IDF is bound to respond.

But Hamas will be heartened by Israel's slow response. Israel's war planners, after declaring at the end of Operation Cast Lead that the IDF's deterrent strength had been repaired and it would take Hamas a very long time to revert to violence, ought to have kept instant reprisal plans ready to whip out for contingencies such as Tuesday's attack.

It was obvious quite soon after the ceasefire that Hamas had not thrown in the towel, as DEBKAfile reported in its exclusive analysis Saturday Jan. 24.

They are reigniting the flames in Gaza to show the US president that the instruction to his envoy to stabilize the ceasefire is meaningless because neither he, Egyptian president Hosni Mubarak or Israeli prime minister Ehud Olmert can make a ceasefire stick without Hamas' concurrence.

So, whether or not Israel opts for restraint, Hamas will seek to underscore this point by escalating the violence, at the same time seeking to refute Israel's claim of restored deterrence. For these Palestinian extremists, the war on Israel is nowhere near over.

The time-lag between the Palestinian attack and Israel's response exposes Jerusalem's commitment to consult with Washington and Cairo before taking any further action - part of the understandings underpinning the Gaza operation. These understandings, reached by Israel's war troika, the prime minister, defense minister and foreign minister Tzipi Livni, are proving now too ungainly and imprecise to fit the realities of Gaza and therefore ill-judged for the sort of rapid response Israel must make to stamp out Hamas' war initiatives.

Earlier, we reported that Israeli tanks fired shells into southern Gaza at the outset of the incident. The Palestinians reported one person killed.

This was the first major clash since Israel and the Palestinians declared separate ceasefires last week. After the Palestinian bombing attack Tuesday morning, the Israeli army closed the Gaza crossings to aid convoys scheduled to have transited Tuesday, as they did throughout the 22 days of Israel's Gaza operation.
Posted by Unknown at 2:31 PM