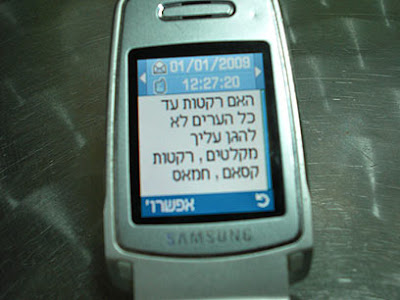 I'm sure Hamas wants us to believe that they will win this war, but so far it looks as if they are the big losers we always thought they were. For goodness sakes--if someone is going to try to psych you out, the least they can do is use correct grammar and syntax!

They have no one in the entire Gaza region who knows how to construct a simple sentence in Hebrew? No wonder their intelligence sucks. They are uneducated buffoons, fools. Are they, for example, trying to listen to Israeli newscasts to find out what is going on, but don't understand the Hebrew?

Not only are they fools, but they are murdering thugs who are deliberately targeting Israeli civilians. They are too weak to face our military, so they try to destroy our children and our old people, our students and our shopkeepers.

Let me prove this to you: we know that for several days the IDF has been massed on the border of Gaza--an easy target for the rocket terrorists of Hamas, correct?

But have you heard about any rockets falling on the IDF? Nope. The only rockets are falling in civilian areas of Ashdod, Ashkelon, Beersheba, Sedrot, etc. (and, of course, on the heads of their own people).

They accuse Israel of targeting civilians when Israel has been more than careful not to drop bombs on civilian targets. The minimal amount of civilians harmed by the bombing of Gaza has happened because the civilians were located in areas where Hamas had put their weapons facilities--of course next to girls schools, hospitals, and mosques (and, in some cases, they used those schools, hospitals and mosques directly to store their weapons).

However, Hamas has clearly targeted civilians, and only civilians.

I would love to say that Hamas will be completely destroyed when this war is done, but their leaders fled, like the cowards they are, and left their people to bear the brunt of the war their leaders started.

The leaders of Hamas are safe and happy, eating lots of delicious foods and sitting in the sumptuous homes of their supporters. They are sleeping like babies at night, completely protected. Not so for the civilians who have found themselves sitting on top of Hamas weapons facilities.

Some heros they are!

Psychological warfare?
Dozens of Israelis received text messages form Hamas Thursday morning, stammeringly warning them that the offensive in Gaza will only bring about massive rocket fire on Israel.

The message read: "Rockets on all cities, shelters not protect, Qassam rocket, Hamas." A source in Hamas military wing confirmed the new tactic, adding that Hamas wants to warn the Israeli public against a future escalation in Gaza.

Popular Resistance Committees (PRC) Spokesman Abu Abir said that the Palestinian organizations have a few surprises in store for the Israelis, and not just military-wise.

The message
"Telephone messages and breaching the enemy's radio frequencies are just some of the surprises we have for the Israeli side. You will be very surprised by our military and technological capabilities."

Abu Abir then warned against a ground incursion into Gaza: "The massacre inflicted on the Israeli tanks in the Second Lebanon War will repeat itself in the Strip. Israel has been defeated, and bombing empty government buildings just indicated its distress."

The Israel Air Force strikes on Gaza, he added, "indicate nothing but their frustration over failing to target the military and people they were after. It is a sign that the resistance is winning."
Posted by Unknown at 5:37 AM