Some Interesting Information About Our IDF--Those Funny Hats, The Swift Tanks, and More!

As I watched the Gaza Invasion and made my prayers for the safety and success of our troops, I started to wonder about some of the things that I saw on the newscasts. First of all, what were those funny hats? What kind of tanks are those? What kind of air-support do our troops have?

So, I searched the internet for some information. Here's what I got . . .

The shape of a helmet can be detected easily because a perfectly round object is uncommon in the environment. Mit’znefet is a nylon camouflage cover that is placed over a helmet to break the shape of helmet and make it less likely to be detected. The Mit'znefet has two sides. On one side is for forest/jungle warfare, and the other side is for desert warfare.

Here's a 2006 story about the helmet-covers.

In 1970, stimulated by lessons learned in the 1967 Arab-Israeli War, by the Soviet sale of T-62 tanks to Arab countries, and by the failure of a program with the UK to develop an advanced tank, Israel began the development of an indigenous tank-building capacity. Israel Defense Forces (IDF) General Israel Tal, considered one of the greatest tank commanders in history, led the development team. Their work became Israel's Merkava (Chariot) tank, the Main Battle Tank of the IDF.

History of the Israeli IDF Merkava Main Battle Tank
In May 1977 Israel announced the Merkava (Chariot) Main Battle Tank and delivered the first model in April 1979. The Merkava has evolved since its initial development through six models and variants (Mark 1b, 2, 2b, 3, 3b, and 4). The main time line is: 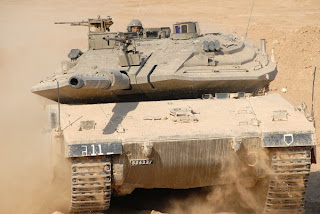 * A high-degree of survivability - achieved via modular armor, and augmented by the use of systems for ballistic protection. Examples of this include: the placement of the engine in the front of the tank, and the storage of ammunition in fire-proof containers;
* Can be used to transport infantry forces.
* Rear door;
* 60 millimeter mortar as a secondary source of firepower;
* Mechanical suspension system which enables a high degree of maneuverability even in difficult terrain, i.e., the Golan Heights.

The Merkava tank's innovative design starts with the engine in front to protect the crew. The basic load for the main gun was 85 rounds but rear doors opened to allow access to a series of ammunition racks holding an additional 200 rounds to facilitate rapid resupply. The tank has sloped sides to repel projectiles as well as reactive armor. In urban combat the Merkava would often sustain multiple hits from RPG-type weapons without damage or crew casualties.

By removing the ammunition racks, the Merkava carries an infantry squad of ten under full armor protection. Tactical use has included positioning a Merkava at the point of entry to a building, using the main gun to breech the wall, then dismounting the squad. The tank can back up to the hole it just created to allow the infantry to dismount directly into the breech.

The Merkava is not invulnerable and Israel's enemies have learned to defeat it. The first such incident was on 14 February 2002 when Palestinians lured a Merkava into a trap and destroyed it with an 80kg bomb, killing the crew. In the Lebanon-Hezbollah war of 2006, powerful anti-tank missiles, RPG-29s and IED weapons were able to destroy Merkavas.

Multiple Uses of the IDF Merkava
The capability of the Merkava to serve as an Armored Personnel Carrier (APC) has been put to use in other ways. The Merkava has been configured to be an ambulance, able to recover and transport wounded soldiers under fire, or used as a command post. Variants mounting heavy machine guns are used in urban situations instead of main gun rounds. Another variant of the Merkava chassis serves as an armor recovery vehicle, capable of towing a disabled tank.

Armament of the Merkava Mk 4 consists of its 120mm smoothbore main gun (an advanced version of the 120mm gun introduced with the Merkava Mk 3), a 60mm mortar and a 7.62mm machine gun. 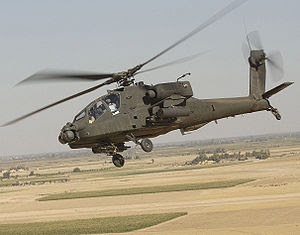 systems, improving the performances of the aircraft. In the 1990s the IAF also received the AH-64 Apache helicopter gunship and equipped its aircraft with the Rafael Python 4, Popeye and Derby missiles.

In the new millennium, the IAF bought the F-15I Ra'am (Thunder) and the F-16I Sufa (Storm), two of the most advanced variants of the F-15 and F-16 fighter jets, manufactured specially for Israel according to the IAF requirements. The IAF has purchased 102 Sufa F-16I warplanes, the first planes arrived in April, 2004 (the IAF is the largest operator of F-16's after the US Air Force). The IAF also purchased the advanced Israeli air-to-air missile Rafael Python 5, with full-sphere capability, and considered among the best in its field, as well as a special version of the Apache Longbow, designated AH-64DI or Saraph. In 2005 the Israeli Air Force received special Gulfstream V jets (known as "Nachshon"), modified with the newest and most advanced intelligence systems in the world, all made by Israel Military Industries.

Three IAF squadrons (150 Sqn, 199 Sqn and 248 Sqn), based at Sedot Mikha, are thought to be responsible for Israel's surface-to-surface nuclear strike capability, maintaining a stockpile of between 21 and 100 Jericho I and II medium-range ballistic missiles[1]. The Jericho III, capable of reaching targets throughout the Middle East and Europe, as well as much of Africa and Asia, is thought to be currently entering service, with a test launch in early 2008.

The Israeli Air Force is considered the strongest air force in the Middle East, and one of the best and most sophisticated in the world. Over the past few decades Israel has purchased sophisticated American fighters and installed on them its locally developed and produced avionics and weapons. Perhaps the greatest strength of the IAF is the skill of its pilots. The IAF relies on its Air Intelligence Directorate for intelligence, including analysis of aerial photography. Many of the IAF's electronics and weapons systems are developed and built in Israel by Israel Military Industries, Israel Aerospace Industries, Elbit and others.

The IAF holds world records respective to the amounts of enemy warplanes shoot-downs, air combat performance, special operations, and air to ground operations from the jet era onward.
Posted by Unknown at 6:08 PM