I TOLD YOU SO! 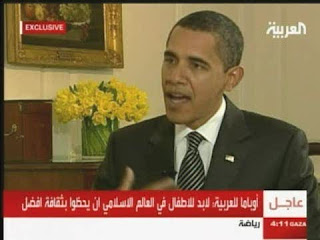 (IsraelNN.com) President Barack Obama chose the Saudi-owned Al-Arabiya Arabic satellite TV network for his first formal television interview as president. He cited his Muslim background and Muslim relatives and said that one of his main tasks was to communicate to Muslims "that the Americans are not your enemy."

Obama said the U.S. had made mistakes in the past but expressed hope "that the same respect and partnership that America had with the Muslim world as recently as 20 or 30 years ago, there's no reason why we can't restore that."

He condemned Iran's threats against Israel, its pursuit of nuclear weapons and support of terrorist organizations, but he added, "It is important for us to be willing to talk to Iran, to express very clearly where our differences are, but where there are potential avenues for progress."

Obama called for a new partnership with the Muslim world "based on mutual respect and mutual interest." He talked about growing up in Indonesia, the Muslim world's most populous nation, and noted that he has Muslim relatives.

"In the last couple of days there have been a lot of statements [from Obama], some of them very positive, and choosing this George Mitchell as an envoy," said Ahmed Youssef, a senior Hamas official interviewed on the Al-Jazeera news network. "I think there are some positive things we have to count." Mitchell arrived in Egypt on Tuesday for a visit that will also include Israel, the PA, Jordan, Turkey and Saudi Arabia.

The interview centered on Israel and the PA, but Obama did not say what his approach to the dispute would be. He said he felt it was important to "get engaged right away" in the Middle East and had directed Mitchell to talk to "all the major parties involved."

The president reiterated the U.S. commitment to Israel as an ally and to its right to defend itself. He added: "I do believe that the moment is ripe for both sides to realize that the path that they are on is one that is not going to result in prosperity and security for their people," he said, and called for “a Palestinian state” that is contiguous with internal freedom of movement and can trade with neighboring countries.

"The rocket barrages which are getting closer and closer to populated areas [in Israel] cannot go unanswered," she said in her first news conference at the State Department.
Posted by Unknown at 3:11 PM