Elite Gets Juiced from Its Java! 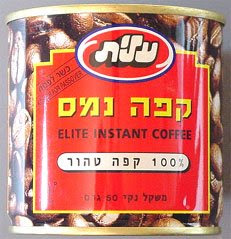 Wow. OK, just a great example about how business can stimulate its own good ideas and adopt them because they make sense--rather than being forced to adopt a "green solution" that never had a corresponding problem to begin with.

It isn't that business doesn't WANT to use green energy, it is that business usually can't afford to use it because it takes either too much time or too much energy to implement--in comparison to what they reap.

This appears to be a very good solution, developed by the business itself.

Hopefully more businesses will find ways to think outside the box and come up in innovative, cost saving, time efficient means to green power.

Elite Instant Coffee is an Israeli consumer legend. For decades, the round coffee tin was ubiquitous in Israeli households. And since its construction in 1956, the company's Safed plant, has been a trademark of the city. The smell of coffee that permeates downtown has illustrated how, in modern times, the city of sages has become the city of java.

But for residents of the surrounding neighborhoods, the smell of coffee has become a nuisance, especially the smog emitted by the shale oil used to power the factory. When it was built, the factory was distanced from residential neighborhoods, but the city has sprawled toward the plant over time, and calls have increased to relocate the factory outside city limits.

The plant is now undergoing a "green revolution," which will reduce air pollution, implementing an apparently simple solution, producing energy to power the factory by burning its leftover coffee beans.

At the beginning of this week, large furnaces were installed to burn the coffee beans at high temperatures to create steam. According to Strauss vice president Pini Kamari, the move will cut the factory's shale consumption in half.

"This creates a direct connection between being 'green' and being efficient," Kamari explained. "Motivation for the change came from our desire to cut costs, reducing energy costs and transportation costs for both the shale and the waste. At the same time, emissions will be much lower, both from the smokestacks and from the trucks. We will create less waste and need to bury less garbage. Noise will also be reduced."

Strauss Elite also decided to raise the smokestack height and install more advanced filters. Kamari expects the NIS 10 million project to pay for itself in three to four years.

Safed is not considered a particularly green city, where environmental matters top the agenda. For years, city residents preferred to breathe in the smoke, especially since the factory employs about 100 city residents.

Newly-minted mayor Ilan Shochat says he is trying to change that image. He recently established an environmental affairs committee and vowed to promote recycling and river preservation. The Elite initiative was perfectly timed, from his perspective. "It will benefit a neighborhood that is home to hundreds of families."
Posted by Unknown at 10:40 AM