According to Muslim Cleric, Preventing Ten-Year-Old Girls From Marrying is Injustice 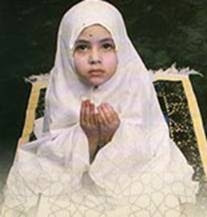 The only thing stranger than this story is its source. The usually passionately pro-arab newspaper, the LA Times, actually has a story that shows the arab world for what it is: extremely oppressive of women.

Here we have Saudi Arabia's most major Muslim cleric saying that ten-year-old girls would be better off married, and that to deny marriage to such young girls is actually unfair to them!

This is a terrible fate. No education, no independence--ever. Think how many brillant young women are sacrificed to this fate? Think how many doctors, lawyers, great academics will be, instead, pushed down into the depths of servitude for the remaining 70-80 years of their lives.

I understand that they are worried about the promiscuity of popular culture. I understand that they don't like the whole "teen scene" that is happening across the world and the hyper-sexualization of women. Religious people everywhere share this concern. However, there are much better ways to handle this than condoning child rape.

How about education? How about showing them how beautiful their future can be if they stick to the books and contribute to society? Didn't Mohammed champion the idea that women should be educated and should be considered equal to men in their intellectual capabilities? Wasn't he sponsored and encouraged by a woman patron? What happened to that tradition? Why are the arabs, instead, remembering the traditions of tribal peoples before the time of Islam?

Nothing is said about this, of course.

The world is truly on its head.

RIYADH, Saudi Arabia (AP) — Saudi Arabia's most senior cleric was quoted Wednesday as saying it is permissible for 10-year-old girls to marry and those who think they're too young are doing the girls an injustice.

The mufti's comments showed the conservative clergy's opposition to a drive by Saudi rights groups, including government ones, to define the age of marriage and put an end to the phenomenon of child marriages.

"It is wrong to say it's not permitted to marry off girls who are 15 and younger," Sheik Abdul-Aziz Al Sheikh, the country's grand mufti, was quoted as saying.

"A female who is 10 or 12 is marriageable and those who think she's too young are wrong and are being unfair to her," he said during a Monday lecture, according to the pan-Arab Al-Hayat newspaper.

Al Sheikh's comments come at a time when Saudi human rights groups have been pushing the government to put an end to marriages involving the very young and to define a minimum age for marriage. In the past few months, Saudi newspapers have highlighted several cases in which young girls were married off to much older men or very young boys.

Though the mufti's pronouncements are respected and provide guidance, the government is not legally bound by them.

On Sunday, the government-run Human Rights Commission condemned marriages of minor girls, saying such marriages are an "inhumane violation" and rob children of their rights.

The commission's statement followed a ruling by a court in Oneiza in central Saudi Arabia last month that dismissed a divorce petition by the mother of an eight-year-old girl whose father married her off to a man in his 50s.

Newspaper reports said the court argued that the mother did not have the right to file such a case on behalf of her daughter and said that the petition should be filed by the girl when she reaches puberty.

Responding to a question about parents who force their underage daughters to marry, the mufti said: "We hear a lot about the marriage of underage girls in the media, and we should know that Islamic law has not brought injustice to women."

The mufti said a good upbringing will make a girl capable of carrying out her duties as a wife and that those who say women should not marry before the age of 25 are following a "bad path."

"Our mothers and before them, our grandmothers, married when they were barely 12," said Al Sheikh, according to Al-Hayat.

There are no statistics to show how many marriages involving children are performed in Saudi Arabia every year. And it's also not clear whether these unions are on the rise or whether people are hearing about them more now because of the prevalence of media outlets and easy access to the Internet.

Activists say the girls are given away in return for hefty dowries or as a result of long-standing custom in which a father promises his infant daughters and sons to cousins out of a belief that marriage will protect them from illicit relationships.
Posted by Unknown at 6:35 AM