Why Jews Can Never Return to Bahrain 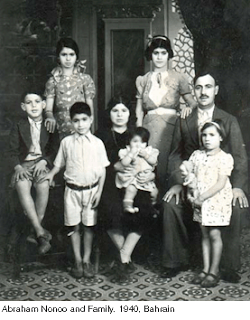 The Monarch of Bahrain has issued an invitation for all the Jews to return. This sounds very kind, right?

This sounds like the man really likes the Jews, and it sounds as if he is so magnanimous!

The truth couldn't be farther from what you think.

I had friends who used to live in Bahrain. They told me there is a luxury hotel there that had to be abandoned right after it was built. Why? Because it doesn't have two elevators--one for men and one for women. The man's wife could not be outside without an escort and she couldn't drive.

Sound familiar? A little like Afghanistan under the Taliban?

The entire country is steeped in radical Islamic beliefs and practices, and an invitation to Jews to come back does not and cannot contain any hope for Jews to remain free to worship as they wish, raise their children Jewish, or any number of things we would assume might be the case.

This essay, written anonymously by a writer who is intimately aware of the situation, is a wake-up call to any Jew who thinks kindly about the King of Bahrain's offer--including the Chabad Rabbi who blessed him recently.

The offer is like the offer of a spider to a fly. Don't get caught up, and don't bless those who would curse you.

Bahrain is a small island in the Persian Gulf which is known to have had a population of Jews long before Islam was conceived. In modern times, Jews had settled in Bahrain after emigrating from Iraq, Iran and India. Bahrain was occupied by the British from 1820-1970. Oil was discovered in 1932 and brought rapid modernization to Bahrain, taking the locals from living under black goat-skin tents to modern super-luxury homes in only a matter of decades.

Over 600 Jews lived on the island of Bahrain before 1948, however, the status of Jews in Arab countries worsened dramatically as many Arab countries declared war, or backed the war against the newly founded State of Israel. Jews were either uprooted from their countries of longtime residence or became subjugated, political hostages of the Arab-Israeli conflict. In virtually all cases, as Jews left the country, individual and communal properties were confiscated without compensation.

Arab anti-Jewish hatred simmered. Jews in Bahrain suffered when crowds looted synagogues, homes and shops and assaulted any Jews they could locate. A few years later, Jews suffered again. In his book The Jews of Arab Lands in Modern Times, Prof. Norman Stillman published a letter sent (1947) from Bahrain to the Jewish Agency for Palestine in Jerusalem, where an eyewitness said he had seen, “atrocities of the worst nature” and “very cruel acts” which were perpetuated against Jewish women in Bahrain.

The man indicated the Jews of Bahrain found themselves “helpless in spirit [and] broken in hearts not knowing when the tragic and barbarous [sic] atrocities will be repeated.”

In August 2008, the king of Bahrain said he would facilitate the return of Jewish expatriates through restored citizenship and land offers, he wants his Jews to come back home. Yet, one needs to look no further that the Constitution of the Kingdom of Bahrain which was adopted on February 14, 2002, to see that Jews returning to Bahrain would be subject to Islamization.

The Preamble to the Constitution of Bahrain states that citizens will “believe that Islam brings salvation in this world and the next” and that citizens will declare “their adherence to Islam as a faith" and that the “Qur'an has been remiss in nothing."

But what does the Qur'an say about non Muslims:

Qu'ran 5:51 O you who believe! Take not the Jews and Christians for friends. They are friends one to another. He among you who taketh them for friends is one of them. Lo Allah guideth not wrongdoing folk.

Qur'an 33:26 Allah made the Jews leave their homes by terrorizing them so that you killed some and made many captive. And He made you inherit their lands, their homes, and their wealth.

Article 2 of the Constitution stated that: Islamic Shari'a (strict Islamic law) is a “principal source” for legislation in the country.

Article 7 of the Constitution indicates that: while “individuals and bodies may establish private schools,” they must be under the supervision of the State and in accordance with the law. Since the law in Bahrain is developed under Shari'a, and that Shari'a mandates only Islam be taught, Jews would not be allowed to open Jewish schools, but all Jewish children would be indoctrinated-by law-under Islam.

Article 23 of the Constitution states that: while everyone has the “right to express his opinion and publish it by word of mouth,” this is only allowed so if those opinions if the “fundamental beliefs of Islamic doctrine are not infringed.”

Article 24 of the Constitution states that: there is “freedom of the press,” however, it also stipulates that this is “guaranteed under the rules and conditions laid down by law” – but the law in Bahrain is governed under Shari'a through the Qur'an!

Jews returning to Bahrain would be subject to Islamization and forced to adhere and be subjective to Shari'a law. Shari'a indicates that when necessary, violence is acceptable—as a matter of fact, to achieve the dominance of Shari'a worldwide is obligatory; this use of force or war is termed Jihad.

Article 30 of the Constitution mandates that: all citizens serve in the Bahrain military, because “defense is a sacred duty.” Yet, this would mean that Jews returning to Bahrain would be mandated to serve in the army and be ready to fight their fellow Jews from Israel. The government of Bahrain hates Israel, plain and simple.

It refuses to establish diplomatic relations with Israel and remains loyal to the pan-Arab fight against Israel. Bahraini Foreign Minister Khalid Bin Ahmad al-Khalifa won't even acknowledge Israel as a country, and in November 2008 called the Jewish homeland a "Zionist entity," the same phrase used by members of Hamas, Fatah and Al-Qaeda.

Qur'an 4:55 Sufficient for the Jew is the Flaming Fire!

Qur'an 5:42 They [Jews] are fond of listening to falsehood, of devouring anything forbidden; they are greedy for illicit gain!

Qur'an 5:42 They are fond of listening to falsehood, of devouring anything forbidden; they are greedy for illicit gain!

Qur'an 8:39 So, fight them till all opposition ends and the only religion is Islam.

About three dozen Jews remain in Bahrain. Almost all are not religious and none can visit Israel, for Bahrain has no diplomatic relationship with Israel.

The modern Bahrainian Jews are doing what the Moroccan Jews did and the Iranian Jews do, they are bowing down to their Islamic masters.

In addition, as a Jewish person from the Americas or Europe, you are not allowed to visit the country, as Jews are not allowed to enter. Thus, the entire idea of Bahrain allowing Jews to re-settle there, after being ran out of the land by fanatical Arab mobs, is just another political ploy.

Mr. X works as a professional in the field of refugee relations.
Posted by Unknown at 4:19 PM