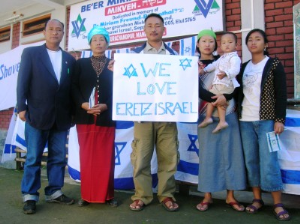 The Bnei Menashe I have met are smart, talented, directed individuals whose love of Eretz Yisrael is second only to their love of Hashm.

I know why the government was trying to hold them back--they are religious, they are Zionist, and they strong. They aren't like the sad-sack Russians who came here with little faith and less Zionism.

These are strong Jews who give much and ask little. They can't be easily controlled by government goons.

Welcome home! Take off your coat and stay a while . . .

150 Bnei Menashe to Immigrate from India
http://www.israelnationalnews.com/News/News.aspx/128370
by IsraelNN Staff

(IsraelNN.com) Israel's Interior Ministry has granted permission to the Shavei Israel organization to bring a group of 150 Bnei Menashe Jews from northeastern India on aliyah (immigration).

The Bnei Menashe claim descent from a lost tribe of Israel and some 7,200 of them reside primarily in the Indian states of Mizoram and Manipur, which border Burma and Bangladesh.

"We have been working on this for quite some time, and I am grateful to the Prime Minister's Office and the Interior Ministry for approving our request," said Shavei Israel Chairman Michael Freund, adding that, "With G-d's help, we will shortly bring the immigrants home to Israel."

Over the past decade, some 1,500 members of the community have made aliyah largely thanks to Shavei Israel, which assists "lost Jews" seeking to return to the Jewish people.

In recent years, the bulk of the Bnei Menashe new immigrants have settled in Maalot, Karmiel and Afula in the north.

Freund said that the group would most likely come to Israel in the next few months and settle in the Galilee, "whose lush and verdant landscape and pastoral setting resemble the land of their birth, making it an ideal place for the Bnei Menashe to start their new lives in the Jewish state."

Because the new arrivals will be coming on special tourist visas, and not under the Law of Return, the entire cost of the operation will be borne by Shavei Israel, which receives no government funding.

The immigrants will subsequently undergo formal conversion by the Chief Rabbinate, after which they will receive Israeli citizenship.

In March 2005, after being approached by Freund, Sephardic Chief Rabbi Shlomo Amar recognized the Bnei Menashe as "descendants of Israel" and agreed to facilitate their return.

Interior Minister Meir Shitreet had previously opposed the Bnei Menashe aliyah, but apparently decided to approve it after he recently met with a group of immigrants from the community and became convinced that they are productive and well-integrated members of Israeli society.

"The return of the Bnei Menashe to Zion after 27 centuries of exile is a miracle," Freund said. "Just as the prophets foretold, the ingathering of the Jewish people to their ancestral homeland continues."
Posted by Unknown at 5:35 PM