First Arab Squatters Removed From East Jerusalem Neighborhood. A Good Start! How Many Can We Evict Tomorrow? 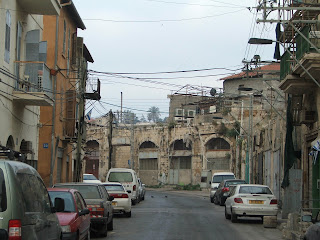 I'm disgusted that the US government would want to protect these squatters! Isn't the US saying that Jews should be evicted, but they are saying that arabs shouldn't be? What the heck?

I understand that they regard this home as theirs, but if they wanted to stay in the home they should have kept paying the rent. They stopped paying a long time ago--I guess pinning their hopes on political stupidity from the EU and the US. They almost won that bet.

I hope, as they predict, that this is only the first move and that the rest of these homes will go to their rightful Jewish owners. It is about time we took back our land, our heritage, and our birthright.

In a pre-dawn operation in the Sheikh Jarrah neighborhood of predominantly Arab East Jerusalem, scores of police officers and IDF troops Sunday evicted an elderly Palestinian couple from their home, despite protests by the United States, other countries, and human rights groups.

Security forces also detained several activists of the pro-Palestinian International Solidarity Movement who had been sleeping on the family's property, and expelled them to the adjacent West Bank, without pressing charges.

A Jerusalem court in July ruled that the east Jerusalem housing provided to Mohammed al-Kurd and his wife Fawzieh in 1956 by the Jordanian government and a UN refugee agency was built on land to which their title was in doubt and they must vacate the property.

The case came to international attention when U.S. diplomats lodged an official protest with Israel for harming Palestinians and for anti-Palestinian actions taken by settlers, citing as one example the eviction of the al-Kurd family from their home in the Shimon Hatzadik complex in Sheikh Jarrah.

For months, a group of settlers has also lived in a portion of the house, maintaining that an Ottoman-era bill of sale grants ownership of the Shimon Hatzadik property to the Committee for the Sephardic Group. The Jerusalem District Court issued a ruling in favor of the Sephardic Group,which transferred the property to a settler organization called "Shimon's Estate."

The settler group, in turn, sought to evict the al-Kurd family, refugees from West Jerusalem, who have lived in the house since the early 1950s.
At 4:45 on Sunday morning, some 20 IDF vehicles and seven police minibuses sealed off much of the neighborhood, prior to the eviction, witnesses said.

The al-Kurds were then taken from the apartment, which they have been sharing with Israeli settlers since 1999, when Israeli courts evicted their son Raed from an added wing of the property. The couple has been fighting for their property through the courts ever since, but in July 2008 they were ordered to vacate the premises at once.

Israel Police spokesman Mickey Rosenfeld said that following the court order naming a Jewish family as the legal owner of the house, "The Arab family was evicted. Two people were, in fact removed from the house," he told Haaretz, referring to the al-Kurds.

"There were also seven tourists, left-wing activists, who were removed." ISM members said that there were eight activists taken from the house, nationals of Denmark, Sweden, the United States, England and Canada.

Danish ISM activist Anders Pilmark, 20, said that 40 to 50 IDF soldiers and police woke them up at 4:45 A.M. and immediately started to clear out the al-Kurd's apartment. The activists were detained on suspicion of trespassing, but were later escorted to the West Bank's Qalandiya checkpoint with no charges pressed.

The couple's neighbor's gathered Sunday morning outside the closed perimeter set up by the IDF. They have been following the case closely, and believe that the court decision and forced eviction of the family paves the way for the takeover of 27 multi-storey houses in the neighbourhood, threatening to make 500 Palestinians homeless.

"This is only the first. Just you wait and see," one of the neighbors said.

Rafiq Husseini, an aide to Palestiniann President Mahmoud Abbas, has been quoted as warning that the takeover of the Kurds' home was part of a wider drive to change the geography of Jerusalem by forcing out Palestinians and replacing them with Israeli settlers. "Such a development would deal a death blow to already-strained peace negotiations," he wrote in a letter to foreign consulates in Jerusalem
Posted by Unknown at 6:07 PM