In a Last Act of Loving Devotion, Rabbi Holtzberg Covered His Wife's Body With Talit 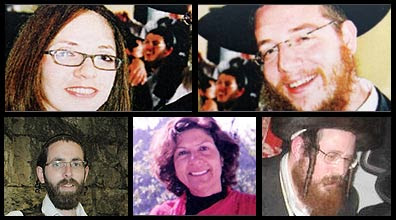 Even in his last moments, facing the threat of death, overcome with sadness, Rabbi Holtzberg's actions were directed toward the proper treatment of his wife, even in death.

This is above and beyond, and speaks of a great love--not only of his wife, but of Hashm, Whose beautiful creation, his dear wife Rivka, had been destroyed by the senseless brutality of those whose heinous acts were witness to the depravity of their lives and their souls (may their names be forgotten and never spoken again!)

Rabbi Holtzberg and Rabbi Teitelbaum were slumped over Gemora Brochos, dedicated to the last moment of their lives to the works of our Sages and the Laws of Torah. Their lives and their deaths a testament to Hashm.

We do not know the evil that happened in that house by those who came to kill, but we do know the goodness of those whose lives were surrendered to G-d during that siege.

May Hashm bless the families of these victims and the Zaka volunteers and their families for their respectful and difficult work they do every day in the name of Hashm.

If you want more details, there is no better coverage than that of Yeshiva World. I have to thank that blog for the amazing coverage throughout this crisis and for their compassionate coverage of the aftermath.

If you are considering a donation, please remember Zaka as well as Chabad. Also, if you would like to help the family of Bentzion Chomron, please go to http://www.krumanfoundation.org/

M
-----
Rabbi Covered Wife's Body with a Tallit Before He was Killed
http://www.israelnationalnews.com/News/News.aspx/128608
by Gil Ronen

(IsraelNN.com) Details of the tragic aftermath of the terrorist massacre in Mumbai's Chabad House have become available.

WARNING: some readers may find the descriptions disturbing.

The bodies of Chabad-Lubavitch emissary, Rabbi Gavriel Holtzberg, and kashrus inspector Aryeh Leibish Teitelbaum, were found in the Mumbai Chabad House library, with holy books in front of them. According to ZAKA emergency service, the body of the Rabbi's wife Rivka was found covered with a tallit, which her husband had managed to cover her with.

The bodies of the two other women who were killed along with Rivka Holtzberg were found tied with telephone cables. The women had apparently been bound before they were killed.

"After security forces completed the takeover of the Chabad House, ZAKA volunteers undertook the task of locating and extricating the bodies of the missing," ZAKA announced. "Six bodies were located and extricated during the course of the Sabbath. The operation was undertaken among the ruins despite risk of life, and the danger from exposed grenades," the hareidi-run group said.

ZAKA emissaries reportedly struggled through the Sabbath to prevent the bodies of the Jewish victims from being taken by local authorities for autopsies.
***UPDATE (8:24 EST Saturday) India to Forgo Autopsies of Israelis, Jewish Victims ***

The sole terrorist who survived the Mumbai attacks told police that the attack on Chabad House was part of the squads' original plan. The terrorists planned to take hostages from the hotels and Chabad House and then use them to bargain for safe passage out of Mumbai, according to the Times of India.

Israeli pathologist being sent
Israeli officials said Saturday night that it appeared that Rabbi Holtzberg and his wife Rivka were killed during the first hours of the takeover of Beit Chabad by terrorists.

Voice of Israel Radio reported that nine bodies were found in Mumbai's Chabad House, and apparently seven were Israeli. Three have not yet been identified. Israel is sending a forensic pathology specialist to Mumbai to assist in the identification.
Posted by Unknown at 4:01 PM