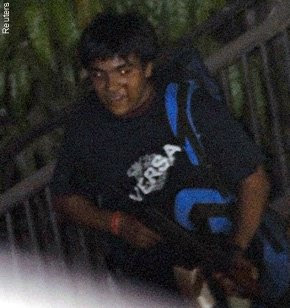 These brutal murderers should not receive one moment of compassion from any of us. They destroyed lives. They killed. They orphaned. They terrorized. For what? Because of some mythic concept of "Jihad" they carry in their evil hearts and in the evil hearts of those who trained, equipped, and prepared these young men for such an evil deed?

This terrorist is crying for his life. Did he show compassion for those who cried for theirs? Did he think about the people he killed as fellow human beings, or some sort of sub-human he could destroy because he was somehow superior? If he is showed compassion, do you think he would take that as a sign that we care, or a sign that we are weak and deserve death?

I bet the second option is more true than the first.

Kindness is not compassion in their world. Kindness is an admission of weakness and proof that we are lesser human beings than these young men and their handlers who think they they deserve to judge all humanity as if they are G-d.

Crazies from other websites have tried to leave comments on my blog about how the "mossad" or the "CIA" are responsible for the carnage, and that the mossad and the CIA are just trying to make people hate the muslims and believe the muslims are murderers and terrorists. I was peppered with at least twenty comments of this sort in the first day of the terror attacks. One of my fellow bloggers discussed this issue, and the fact that a rumor about the mossad was circulating on the internet.

If muslims really cared about the image of their "religion of peace," then they would be out there, big time, repudiating terrorism in all its forms. There would be a mass appeal to the youth to stop the violence, to teach them about the "real message" of Islam. There would be public service announcements, massive donation drives, new educational incentives, and strong public outcry against the terrorism of muslim youth. Muslim countries would spearhead anti-terror programs in their schools, Imams would be on Fox News and CNN talking about how they had gotten the most prominent educational psychologists and most important leaders of Islam to help in the effort. There would be feature stories on PBS about how the countries were turning around the violence.

But this is not what is happening. This is not going to happen.

Instead, their blogs celebrate the attacks of innocent civilians, mothers and fathers, grandmothers and grandfathers, little children.

What do I hear? What words of solace or sadness or embarrassment or rebuke or repudiation do I hear from the muslim world?

It is the sound of silence.

Stop hatching conspiracies where there are no conspiracies and start facing the fact: we are in a religious war with radical muslims who want to kill us.

They only ones they hate more than non-muslims are muslims who don't follow whatever strange radicalization the terrorists have adopted on daily basis.

Either there is a massive outreach campaign by muslims who don't follow the credo of extremism before it is too late, or they, like the rest of us, will find themselves painted into the corner of muslim extremism on one side and anti-muslim hatred on the other.

There is no room for hiding one's head in the sand. This is a time that calls for action.

And, as for this young man who murdered innocent people in the street, I must share a piece of Jewish wisdom:

the wicked and calculating person (who killed intentionally and was sentenced to death) – if he seeks sanctuary among us, we must not provide him with asylum and not have mercy upon him...because compassion towards the wicked – is cruelty to all beings.

The sole surviving terror suspect in the Mumbai massacre cowardly begged to live as he lay in police custody suffering from gunshot wounds, according to a published report.

"I don't want to die. Put me on saline," gunman Azam Amir Kasab pleaded in a hospital after seeing the mutilated corpse of another terrorist being wheeled to the morgue, according to Britain's Sunday Mirror.

Kasab, 21, reportedly confessed he was one of just 10 terrorists armed with AK-47s, grenades, GPS devices and BlackBerrys who were instructed by their commanders to "kill until [their] last breath."

Their 60-hour siege claimed at least 174 lives - including five Americans. Casualties are expected to exceed 300 once the final searches of the Taj Mahal hotel are completed, London's Daily Mail reported.

The captured terrorist also admitted to interrogators that his bloodthirsty band trained at two terror camps and were aided by one of Interpol's most wanted criminals, Dawood Ibrahim, according to IBN, a CNN affiliate in India.

Preparations for the attacks - in which the terrorists hoped to kill 5,000 - started over a year ago, according to London's Telegraph and the Mail.

The baby-faced gunman confessed the savage siege was hatched in terror camps based in Pakistan-occupied Kashmir, a conflict-prone region next to India, IBN reported. The Mumbai terrorists were reportedly instructed to kill indiscriminately - not just Westerners.

An advance team of terrorists came to Mumbai a month earlier to scout the location, take photos and make detailed maps, according to The Mirror.

The gunmen's journey to India reportedly began in Karachi, Pakistan, on a merchant vessel owned by Ibrahim, a Mumbai mobster who is on Forbes' list of the 10 most-wanted criminals and has a history of terror links.

At some point during their high-seas voyage, the Mumbai gunmen changed boats by hijacking an Indian fishing trawler, and then killed its five-member crew.

The Indian Navy found the trawler Friday with the skipper decapitated and his hands bound behind his back. Authorities said they recovered satellite phones from the vessel and showed a phone log of calls made to Pakistan and Jalalabad, a border city in Afghanistan.

The terrorists struck 10 targets in the heart of Mumbai, including two five-star hotels - the Taj Mahal and the Oberoi - and a Jewish center led by a rabbi from Brooklyn.

Kasab and another terrorist allegedly began the killing spree at the Chhatrapati Shivaji Terminus railway station. A photo taken captures Kasab smiling as he wields his AK-47.

Authorities said he and his accomplice were responsible for the deaths of three high-ranking police officials, including the head of the anti-terror squad.

Kasab was captured while trying to flee in a car he seized from its driver, according to local reports, and was reportedly shot in an ensuing gunfight. Now authorities have him under suicide watch while he's being interrogated by Indian, US and British authorities.

The carnage ended early yesterday as Indian commandos hunted and killed three terrorists holed up inside the Taj, ending the three-day rampage.

But commandos were still going through rooms at the historic hotel, checking for any remaining gunmen and freeing hostages hiding on upper floors.

Pakistan's president has pledged his assistance to India and insisted his government had no part in the attacks.

But Ibrahim is believed to be hiding out in Karachi, Pakistan. He's also believed to have ties to Pakistan's intelligence agency, as well as to al Qaeda.

With Post Wire Services
Posted by Unknown at 7:41 AM