A New “Land for Peace” Proposal 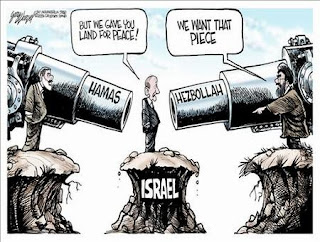 Now, every agreement with any arab group has always included the idea of “land for peace.” Why? Because the arabs know that Israel has very little land to give. So, if they keep insisting that we give them a pay off of land, not only will we have destroyed any defensive position we may now hold, we will also shrink measurably. This is a very good strategy for the arabs, and a very dangerous one for us.

Nonetheless, every Israeli government and every American and EU official seems determined to accept the idea that peace must be predicated upon the idea of giving up land.

I don’t think much will change with the new Obama administration. I expect that he is wedded to the idea of “land for peace” just like all of his predecessors. I know that, even before she has opened her mouth, the new Secretary of State, Hillary Clinton,will be studying up on Resolution 242, and expecting the same “miracle” between Israel and the “Palestinians.”

I even expect that, for all his promises to the contrary, and all his speechmaking, and all his made-for-TV sound bites, that the potentially former-future PM, BiBi Netanyahu, will sit down with a dower face and a strong jaw on live TV and concede Jerusalem, Judea, Samaria, and the Golan Heights to our enemies.

I am not a profit, but I have seen the past, and the past is palpably present in the future of Israel and in both political landscapes—in Israel and in the US. Perhaps we can even read the future in yesterday’s newspapers as the old actors return to the stage—Clinton, Bibi, Scowcroft. What is next? Will Arafat rise from the grave? It all seems way too familiar.

A few things are different, however. Now, we have negotiated at Oslo and gotten only an intifada in return. Sharon sold his soul for a false peace and now has only the sad existence of life support. We have given up Gaza and find rockets raining down on our heads, Hamas running rampant, formally employed and prosperous Israelis living in destitution in cramped caravans, and a government so corrupt that our lame-duck PM has to arrange his schedule around police interrogations.

Now, as we stand on the verge of a new election cycle in Israel, and the dawning of a new administration in the US, it is time to suggest a new way to do things.

This is why I am proposing a new “land for peace” initiative.

Here’s how it would work:


After all, if the countries of the world agree that the concept of land for peace works, then why not use it as it should be used? Why not give land back to those from whom it was taken and recognize that the Jewish people have a right to their ancestral land. After all, isn’t the idea that ancestral land should be returned the underlying argument of “Palestinian” people?

Why don’t we acknowledge that they are correct, and insist upon the return of all land that was taken in war—i.e. our own land!

This peace agreement is one that has already be ratified by the Highest Authority in existence, the Highest Court in the universe, and the Greatest Arbitrator of all. It is about time we give it a try.