Man Sentenced To Death For Assisting Israel. Wow. That's Some "Peace Partner" We Have, Huh? 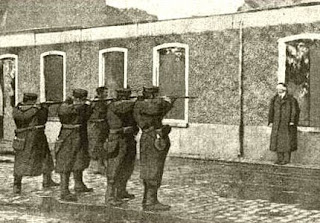 Wow. I’m so glad to see that the “Palestinian people” continue to prove their bloodthirsty hatred of all things Israel. This will, I’m sure, give the US, Russia, the EU and Tony Blair hope as they attempt to create a terror state on our doorstep. They can be assured that once Israel gives up their strategic land that Abbas will surely continue to wage war in whatever way possible possibly destroy us once and for all, and they already know that Hamas will.

So, either way, the members of the quartet can be giddy with the idea of Israel’s continued torment.

I don’t know how they sleep at night. I don’t know how they dare to look in the mirror and face themselves in the morning. I have no idea why they continue to pressure Israel into ridiculous concessions when they know darn good and well that we have no partner in any “peace” negotiation.

A Palestinian security official was sentenced to death Wednesday by a Palestinian Authority military court in Bethlehem after being convicted of collaboration with Israel.

The court ruled that the man, who served in the PA's General Intelligence Service, will face execution by a firing squad. He was convicted of involvement in the assassination of three members of the Fatah's al-Aqsa Martyrs' Brigades in 2002.

The three were killed by Israeli forces in a refugee camp near Bethlehem.

According to Palestinian investigators, the security official was recruited by Israeli intelligence agents in 1999 while working as a gas station's attendant. The man's name was banned from publication.

A short time after agreeing to help Israel, the man apparently joined the Palestinian security establishment.

The convicted collaborator confessed to the charges against him during interrogation. He said that he also took part in monitoring Palestinian stone-throwers. The man was also convicted of accompanying Israeli security forces during arrest operations targeting wanted Palestinian suspects.

The death sentence will be carried out after Palestinian President Mahmoud Abbas will sign the execution order.
Posted by Unknown at 3:33 PM