"Give Them Hevron" Ross Named As Special Advisor to Hillary 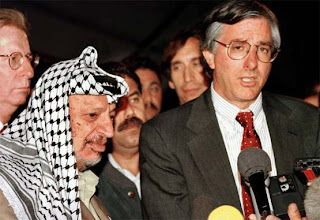 Well, everyone seems to think this is a good thing. I guess it beats a lot of other choices that Obama could have made, but I am wondering if Ross’s “hawkish” reputation is serving as a fig-leaf for Obama’s pro-Arab predilections.

Ross was the architect of Oslo 2, which was a complete flop—calling for the PA to do a bunch of stuff (like reworking their charter so that it didn’t call for the destruction of Israel, changing the school system so that they weren’t educating their kids to hate Jews, etc.), and the PA did nothing of the sort.

Then, he went along as if the PA had done everything they were supposed to do, and he engineered the give-away of Hevron to the arabs, including:

This, of course, lead to Netanyahu losing the government and destroying his reputation for at least six months until most of the sheep of Israel forgot all about his treachery because he looks good in a suit and accepted the increasing level of violence, the destruction of much of the holy city of Hevron, and rewarded the arabs for the riots of 1929.

This might be considered a “great achievement for peace” for Obama—but not for us. It was a complete “land for peace” agreement, and, of course, we are well aware that that concept does not work at all.

It also introduced that nice minhag of releasing every murdering terrorist we have in our prisons in exchange for a handshake, a smile, and a wink so that they can go back to their former profession and kill more Jews.

Ross is no friend of Israel. He is no “Hawk.” He is just another “give the arabs whatever they want” lackey of the US.

He will attempt to force all of the evil of Oslo back upon us and more, and with Bibi at the reins, it is all looking like a replay of a bad copy of the same old movie starring the same washed-up actors as they attempt to regain the full folly of their youth.

The appointment was announced Monday by State Department spokesman Robert Wood, who noted,"This is a region in which America is fighting two wars and facing challenges of ongoing conflict, terror, proliferation, access to energy, economic development and strengthening democracy and the rule of law."

He added that "Ambassador Ross brings a wealth of experience not just to issues within the region but also to larger political-military challenges that flow from the area and have an impact outside of the Gulf and Southwest Asia, and the secretary looks forward to drawing on that experience and diplomatic perspective."

Seen in U.S. as Pro-Israel Appointment
Ross helped write the speech delivered at the AIPAC convention by President Barack Obama during his campaign last year, and served as an official adviser to the campaign.

The long-time diplomat has said he believes that negotiations between the Jewish State and the Palestinian Authority should be contingent on the PA taking responsibility for preventing violence in any location vacated by Israel.

Ross has said he is opposed to unilateral withdrawals and noted in the past that Israel's withdrawal from Lebanon in 2000 strengthened the position of the Hizbullah terrorist organization there. He also opposes setting a timeline for creation of a PA state, according to Who Runs Government.

The new Special Adviser supports Israel's right to build a security barrier for self-defense, but believes it should be temporary.

He also reportedly supports peace talks between Syria and Israel and negotiations over the Golan Heights.

In addition, Ross has said he believes that Iran must be stopped at all costs from "going nuclear."

No Novice to Middle East Diplomacy
The appointment returns Ross to a forum with which he is exceedingly familiar, having served in a similar capacity under Clinton's husband Bill when he was president.

As Middle East coordinator during the Clinton administration, Dennis Ross served from 1993 to 2001 as the top negotiator for the U.S. between Israel and the Palestinian Authority, headed at that time by Palestine Liberation Organization (PLO) chairman Yasser Arafat.

Ross also served under President Ronald Reagan in 1981 as the director of Near East and South Asian Affairs for the administration's national security staff.

Ross left government service in the year 2000 to head the Washington Institute for Near East Policy, a think tank described by Who Runs Government as "hawkish" and "with a pro-Israeli bent." Together with New York Times columnist Thomas L. Friedman, Ross founded the Kol Shalom synagogue in Rockville, Maryland in 2002.
Posted by Unknown at 3:39 AM