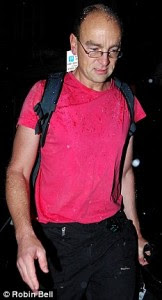 The whole idea of showing anger because Jews dared to defend themselves against such obvious provocation and violence that even the UN can see why we did it, shows that the general consensus of society seems to follow the line that Jews must be seen as victims. As victims, we are not frightening or threatening or even human.

This is how Hitler wanted to portray the Jews. He wanted everyone to see us as powerless and pathetic. This is why I have such a problem with the whole "holocaust industry" in this country--whereas we have replaced our identities as Jews with identities as survivors or children or grandchildren of survivors. Too many Jews these days have forgotten anything to do with their identity, their religion, and the Torah. All they have are Holocaust narratives.

I understand that the Holocaust is important to remember, and that we must never let anyone tell us it didn't happen or it wasn't as bad as it was. The Holocaust was the most horrible crime ever perpetrated against human kind. But, we must remember that we are not "holocaust survivors" first and foremost. We are Jews. Were were Jews before the Holocaust, and we must be Jews after the Holocaust.

Don't see yourself as a victim. Don't let others see you as a victim. The only way to do that is to own your Judaism, know the Torah, study the texts, understand the laws and the traditions of your family and your people. You must keep Shabbat and Kashrut and Family Purity--or Hitler won. Our Torah, our laws, our traditions are the things that make us Jews--not the holocaust. It was a tragedy, a horror, a human catastrophe, but it is not an identity. We are Jews, not survivors. G-d makes us Jewish. Torah makes us Jewish. These are the things that grant us dignity, power, and success.

When we stop being victims and start being Jews, we are fully human. That makes our enemies nervous because they want to deny our humanity and our rights to be fully human. They are threatened by us acting as if we have a right to live our lives in our land with the same rights as other human beings.

This is why the world reacted as it did when we defended ourselves against the constant attacks in Gaza. Jews with guns who act fully human are defying the victim identity others wish to put upon us. They want us to keep being victims. They want us to be martyrs to the cause of their victory in the world.

Too bad for them that we have a different idea, right?

A top UK Foreign Office official has been arrested on suspicion of an anti-Semitic outburst at a gym, the Daily Mail reported Monday.

Rowan Laxton, who is head of the South Asia Group at the Foreign Office, was watching TV reports of the IDF offensive in Gaza while on an exercise bike at a gym when he was allegedly heard shouting: "F**king Israelis, f**king Jews," and saying that IDF soldiers should be wiped off the face of the earth, the UK newspaper reported.

His tirade reportedly continued even after he was approached by other exercisers at the London Business School's gym in Regent's Park.

After a police complaint was filed, Laxton was arrested on suspicion of inciting religious hatred through threatening words and behavior. He was bailed until late March, said the Mail.

Laxton has worked extensively in the Middle East and has been deputy ambassador to Afghanistan.

"I was in the gym around 9pm and I heard this guy shouting something about "f**king Israelis," the paper quoted one witness as saying. "This bald guy was cycling away on his machine in the middle of the exercise room. When another guy approached him he shouted "f**king Jews, f**king Israelis."

"The gym was pretty full and everyone looked totally shocked," he continued. "That sort of racist language is totally unacceptable. The gym staff called security and I think the guy was asked to leave."

The Mail quoted Mark Gardner, deputy director of the Community Security Trust which monitors anti-Semitism, as saying that "we must not allow an overseas conflict to cause racism here in Britain and especially not among civil servants."

"We hope that the appropriate disciplinary actions will be taken forthwith, as they would be if these comments had been made against any other section of society," continued Gardner.

A Foreign Office spokesman said: "It is too early to comment in detail on a matter that is currently the subject of police inquiries. But we take extremely seriously any allegation of inappropriate conduct on the part of our staff and continue to follow developments closely," the Mail reported.

When contacted by the British newspaper, Laxton denied his remarks were anti-Semitic but declined comment when asked if they were anti-Israeli.