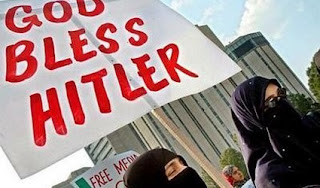 Yup. The AP is at it again. "It's the Gaza War! It's Outrage over the horrible Gaza War!" they trumpet in every story. We know this is BS. We know that anti-Semitism is alive, well, and boiling very close to the surface every single day of the year just waiting for an excuse to show itself.

It's not the war, which was legitimate, carefully waged to prevent civilian deaths, and incomplete. If the war had been completed, we wouldn't have rockets still falling on the heads of innocent Israelis.

This is anti-Semitism pure and undiluted, and the AP is trying to put a fig-leaf over it.

These Jews in Muslim lands have NOTHING TO DO WITH THE GAZA WAR. Most of them, out of fear and coercion have even denounced the war in order to make peace with their co-nationalists. However, this has not helped them one bit because the problem is not the war. The problem is the hatred of Jews.

This is clear from the targets. Did the "protesters" attack Israeli consulates and Israeli government offices? No. They attacked synagogues. They attacked Jews in the streets, in their homes, in their businesses.

The war is simply an excuse for the crowds of people who hate Jews, or who want to blame their problems on Jews to have permission to do so under the banner of "protest against the Gaza war."

Why? Because the AP assumes that I should be held to a certain standard of civility. They would expect me to contain my "protests" to legitimate forms of speech, such as carrying a sign or writing letters to the appropriate representatives of whomever I had a problem with.

Not so for arabs.

The allowance for such behavior has completely racist roots. The AP is saying, "Look, these arabs can't act like civilized human beings. They can't be held to the same standards as other people because of their backward religion and culture."

How come the arabs don't protest how the AP portrays them? How come they don't say, "These people who are desecrating the houses of worship and attacking innocent people under the guise of 'protest' are not representatives of the Muslim people!"

But, they won't. I guess self-respect is a lot less important to them than I thought.

CAIRO—Outrage at the Israel war in the Gaza Strip has turned to intimidation and even violence against Jews living in some Muslim lands, raising questions about the stability of these often tiny communities.

In Turkey, Yemen and Indonesia, Muslims have shut down a synagogue, stoned homes and used anti-Semitic slurs. Although the incidents have been isolated, the Jewish minorities in these lands are concerned.

"Before the conflict broke out in Gaza, we were very involved in the community," said Yusron Samba, whose family for years had operated a synagogue in Indonesia that shut down in fear over the war. "Of course we're afraid following strong reaction recently from some Islamic groups questioning our presence here."

The fury over Gaza has centered around the hundreds of Palestinian civilians killed in the war, in which 13 Israelis also died. Israel says it could not avoid killing civilians because Gaza militants operate from residential areas, but critics accuse it of using disproportionate force in its war to halt rocket attacks on its territory.

The steep Palestinian death toll sparked protests across the Muslim world, Europe and in Venezuela, and in some cases, the rage turned to violence. Firebombs were hurled at synagogues in France, Sweden and Belgium, Jews were beaten in England and Norway and an Italian union endorsed a boycott of Jewish-owned shops. In Venezuela, vandals shattered religious objects at a synagogue and spray-painted,

In Yemen, where Islamic militancy is on the rise, anti-Israel protesters pelted several Jewish homes with rocks and smashed windows, injuring at least one person, security officials said.

President Ali Abdullah Saleh has offered to give plots of land in the capital, San'a, free of charge to Jews who want to relocate from the provinces, officials said. No one has taken him up on the offer, said the officials, who spoke on condition of anonymity because the offer was made privately in a meeting between the president and Jewish leaders.

As many as 250 of Yemen's estimated 400 Jews are thought to live outside San'a.

In Indonesia, the world's most populous Muslim state, Islamic hard-liners marched to the gates of the country's only synagogue, chanting, "Go to hell, Israel."

"If Israel refuses to stop its attacks and oppression of the Palestinian people, we don't need to defend (the synagogue's) presence here," said Abdusshomad Buchori, who led the protest in the town of Surabaya and has threatened to drive out its Jews. The synagogue has been shuttered since.

In the past, Jews in Surabaya have experienced no hostility, Samba said. But increasingly—probably because of events like the Gaza war—a smattering of swastikas has appeared on the backs of buses, he said.

Because of the hostile reaction, "we're not exposing ourselves to the media right now," he said. "We also report all protests to the police."

Several dozen Jews are thought to be living in Indonesia, descendants of traders from Europe and Iraq.

Jewish leaders in Egypt and Syria were curt when asked about the climate toward Jews in their countries.

"We have no troubles and we don't talk politics," said Carmen Weinstein, head of the Jewish Community in Cairo.

In Syria, Jewish community head Albert Komho said, "There is no fear and there are no threats. We are not involved in any political activity and we are functioning normally."

Jews moved to the Middle East and north Africa after Spain expelled them in the 15th century. Jews were often restricted to separate neighborhoods, had curtailed rights, and sometimes were persecuted. Their condition deteriorated sharply in the first half of the 20th century as a result of Arab nationalism and Israel's impending establishment. Hundreds of thousands fled or were expelled from Arab lands around the time of Israel's 1948 creation, and today, only several tens of thousands remain.

Some communities are tiny, numbering about 100 in Syria and less than a dozen in Baghdad. The biggest concentrations are in Turkey and Iran, where Jews enjoy the stated protection of Islamic governments.

The Iranian Jewish community went out of its way to distance itself from Israel during the Gaza fighting, issuing a statement expressing solidarity with the Palestinians and condemning the Israeli offensive. "The inhuman behavior of the Zionist regime contradicts the religious teachings" of the Jewish faith, the statement said.

A group of Iranian Jews, including Jewish lawmaker Siamak Mara-Sedq, protested against the war in front of the U.N. office in Tehran in late December.

Turkey is Israel's best friend in the Muslim world, but the greatest turbulence over the Gaza war has taken place there. Earlier this month, Turkish Prime Minister Recep Tayyip Erdogan confronted Israeli President Shimon Peres over the high Palestinian civilian death toll, before storming off the stage they shared at a high-profile forum in Davos, Switzerland.

Some of Turkey's 23,000 Jews, however, were more alarmed by a government-ordered minute of silence in schools for Gaza's dead, which they fear is a sign that the Islamic-leaning government's declared intolerance of anti-Semitism might waver. Erdogan's recent observation that the Ottoman Empire welcomed Jews also rankled many who took it to mean that Turkey considered them guests, not citizens.

Although Turkish fury was mostly directed at Israel, a few Turkish protesters held placards with anti-Semitic messages. Turkish media showed a photograph of three men in front of the office of a cultural association, holding a dog and a sign saying, "Dogs are allowed, but Jews and Armenians aren't."

Jewish community leaders say hundreds of anti-Semitic writings have appeared in Turkish media, and that prosecutors have failed to take legal action.

"Everyone can criticize the policies of Israel, we respect that," Silvyo Ovadya, head of the Jewish community in Turkey, told the Milliyet newspaper. "However, every speech criticizing Israel has a tendency to turn into cries of 'Damn Jews.' I don't recall such an atmosphere previously."

Erdogan has tried to reassure Turkey's Jews, who live in a country of more than 70 million Muslims, that criticism of Israel does not amount to an attack on Jews and their faith.

"There has been no anti-Semitism in the history of this country," Erdogan told ruling party lawmakers last week. "As a minority, they're our citizens. Both their security and the right to observe their faith are under our guarantee."
Posted by Unknown at 4:51 AM