Livni Spurned in Coalition Shidduch With Lieberman. Yisrael Beiteinu Wants To Play House With Bibi but Keep Kadima as Mistress 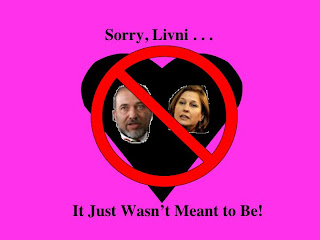 I guess this is what passes for “suspense” lately? How, exactly, did the inevitable coronation of Bibi Netanyau become “suspense”?

We all know that Tzippi can’t make a coalition (she already tried and failed. Isn’t that why we went to early elections?). Lieberman wants to go with a winner not a loser--even if Bibi IS a weasel.

We all knew, last year, that we would be stuck with Bibi again, that he was the only “choice” we were getting.

Is he better than Livni? Probably not. The only difference that I see between the two is that Livni is stupid enough to say what she is going to do to destroy Israel and Bibi keeps it to himself.

So here we are back at START again with Bibi. Do you think he has learned one thing from his past? I doubt it. He is already talking about giving away land, and he hasn’t even started in office. He talks tough, but when the spoon hits the pudding, he puts his tail between his legs, tosses the arabs whatever they want, and runs. That’s his history, his story, his failure.

I guess this isn’t a good time to bring up that really scary prophecy in Drosnin's "The Bible Code," right? You know, the one that says that Bibi will travel to Syria early in his term and will be, G-d forbid, assassinated? Everyone used that section of the book to say that Drosnin’s predictions were completely bogus—but then they weren’t counting on Bibi going back into the PM slot, now were they?

Even though I don’t put any stock in these Bible Code “prophecies” that have been so popular—Drosnin’s prediction has been tugging at my mind through this whole election process. I sure hope he is wrong. The last thing we need is a Martyred Bibi. Ugh. I don’t want to even think about how horrible that would be.

So, all hail PM Bibi, Israeli Politician Extraordinaire! Let’s all pray for the guy. Maybe he can grow a backbone and some BZ before it’s too late for us and our little country that could.

(IsraelNN.com) Ending nine days of guessing around the country, Avigdor Lieberman, enjoying the kingmaker role as head of Israel’s third-largest party, recommends that Binyamin Netanyahu form the country’s next government.

"Netanyahu and Livni must sit together in the government, without rotation," Lieberman told Peres. "A government of 65 MKs [with only the nationalist and religious parties, as well as Yisrael Beiteinu] will be nothing more than a 'survival' government. The three large parties must first form a government, and then the other parties will be invited to join."

Peres is in the midst of a round of meetings with leaders and representatives of all of the Knesset parties, hearing their recommendations on who should form Israel’s next government. Lieberman’s recommendation gives Netanyahu an outright majority of the incoming Knesset, simplifying Peres’s job.

Guessing Continues
The guessing game is not over, however. Will Netanyahu try to form a unity government with Kadima, as he has said he would do, or will he settle for a nationalist government of 65 MKs with Lieberman and the religious and nationalist parties?

More questions: If Netanyahu chooses a unity government, will he begin the negotiations with Kadima - or will he give his natural partners “first dibs”? And what about Kadima itself – is it interested in joining a Netanyahu-led government, or will it remain in the Opposition, as leader Tzipi Livni has said? Livni has said that she will agree only to a unity government that includes a rotation agreement between her and Netanyahu as Prime Minister - a scenario the Likud has ruled out. And will Kadima split up, with some MKs joining Netanyahu and others remaining in the Opposition?

The Lieberman Enigma
Lieberman served as a top aide to Netanyahu in the past, continues to talk with him frequently, and his voters are strongly right-wing and nationalist. Despite these niceties, he did not makes things easy for the nationalist camp, and did not state aloud that he would recommend Netanyahu until nearly the last minute.

It is not clear exactly what Lieberman’s considerations are. Some have said that his fence-sitting was related to the 8-year-old police investigation against him, which has recently gained steam once again. Just yesterday, police sources met with Attorney General Menachem Mazuz and told him that the accusations against Lieberman “are becoming more weighty.” Lieberman may or may not have been weighing which government – either left-center, or nationalist – might mean better chances for the closing of the case. He was also likely considering which ministerial portfolios the investigation prevents him from receiving. After the previous elections, in 1996, Mazuz announced that because of the investigation against Lieberman, he was not eligible to serve as Public Security Minister.

Adding to the mystery were some of Lieberman’s political moves in the past. After being left out of Olmert’s government in early 2006, he joined the government several months later, and then abruptly left just over a year later.

Despite Lieberman’s strongly hawkish reputation, his stance against further withdrawals is far from absolute. After the 2006 elections, he outlined on Channel Two Television the circumstances under which his party would oppose another unilateral withdrawal. “If it will be a withdrawal with no benefit, no compensation and no improvement in the security situation, then we will not be partners," he said.
Posted by Unknown at 4:59 AM