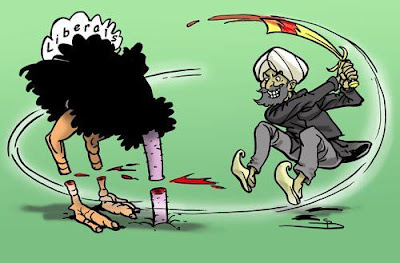 Well, I wouldn’t be surprised if Lieberman, himself, orchestrated this “shocking” story from Haaretz. After all, what would boost his campaign more than being a member of Kach?

Right now, Israel stands at the precipice. The people are looking for a leader that will stand up for the right of Israel to have secure, defined borders, security against terrorism, and a strong presence in the region. They are tired of milk-toast watered-down drips under pressure. They want someone strong and capable.

Having a relationship with Kach, having an affiliation with them, would not hurt ANY politician in Israel right now, and it would be a definite boon to their political aspirations—despite what the lefties at Haaretz think.

I think Haaretz has been successfully manipulated into “revealing” this “harmful” truth which will, in the end, serve to make Lieberman much more powerful, will solidify his right-wing credentials, and will guarantee him a powerful position in the knesset—maybe even control over a ministerial position in the upcoming government.

I just hope that Lieberman is the right wing candidate he claims to be, the he eschews any negotiation with terrorist enemy states, and that he can successfully hold up against the pressure that Bibi will press him with in his efforts to buckle under and kiss the tuchas of any American administration that comes calling (no, Bibi, we haven’t forgotten Oslo).

By the way, why is Kach still banned? Aren’t all those arab parties “inciting racism” every time they come up to speak at the knesset? Aren’t they the most obvious groups to ban? Why Kach? And, while we are there, what is it with Kach being called a “terrorist organization” by the American government? I guess they have forgotten that Rabbi Kahane was murdered by an arab terrorist—and that everything he said about Islam is coming true.

Unfortunately, people seem to think that by denying the messenger, that the message will be diminished. This is not the case. What Rabbi Kahane said comes true daily, hourly. Denying what he said and trying to paint him as some evil monster does not diminish the truth of what he had to say or the scary reality we find ourselves in for failing to heed his warning.

Yisrael Beiteinu chairman Avigdor Lieberman was once a member of the
outlawed far-right party Kach, the movement's former secretary general revealed on Tuesday.

Yossi Dayan said he issued Lieberman, a prime ministerial candidate whose current electoral campaign against Israeli Arabs has provoked outrage, with a party membership card when he was still a new immigrant to Israel.

"I don't recall to what extent he was active in the movement, but if he denies [this], I am ready to testify in any forum that Lieberman was indeed a member for a short amount of time," said Dayan.

Kach was banned from running for the Knesset in 1988 for inciting to racism.

Ultra-nationalist activist Avigdor Eskin, meanwhile, remembers meeting Lieberman at Kahane's office on Ussishkin Street in Jerusalem. "I remember this very well, because I arrived there one day after I immigrated to Israel in 1979," he said.

Eskin came to public attention for having boasted of holding a pulsa dinura ceremony prior to 1995 assassination of prime minister Yitzhak Rabin. The ceremony, believed to be of kabbalistic origin, is aimed at conferring a death curse on the subject.

"Kahane saw him as a good guy. I also thought back then that he was not a Kach man ideologically, unless the only measure of this is the question of whether you like Arabs. According to what I remember, he handed out the movements' publications among its small student group in the Hebrew University," Eskin said.

He added that he met Lieberman in Kahane's office a number of times, but to the best of his knowledge the Yisrael Beiteinu chairman was only involved in Kach for a number of months.

Yisrael Beiteinu relayed in response to the Haaretz report that, "We are not dealing with this orchestrated provocation. The success of Yisrael Beiteinu has created among its opponents a great quantity of lies and fabrications, which the political and media establishment knew beforehand."

Former Kach members, for their part, actually reject the Kahane comparison. "He is a poor imitation of Kahane," one said. Dayan, who was close to Kahane for over a decade, is disgusted by it.

"Not everyone who speaks against Arabs is a Kahane," he said. "[Lieberman] can take a few elements, but to be Kahane is a whole doctrine. Nevertheless, I'm happy that he's saying what he's saying, because without a radical solution to the problem of Arabs in Israel it can't be good here."

Rate This Article!
Posted by Unknown at 8:44 AM