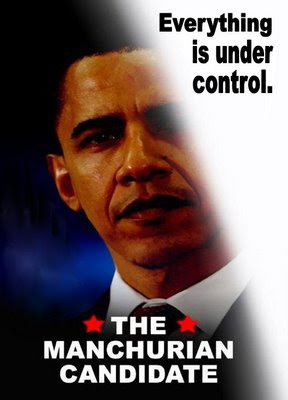 The only difference between Obama and Bush is that Obama says it, and Bush didn’t. They both want the elimination of Israel, it is clear.

I guess I should thank President Obama for saying these things BEFORE the Israeli election so that Israelis are not take off-guard by voting for anyone who would compromise with this idiot. We could be led astray by Bush because he was a bit more of a diplomat, more seasoned, more cautious, with more experience.

Bush knew to keep his mouth closed before an election so that he would get the kind of administration in Israel that he wanted--someone soft on terrorism, someone willing to allow Israel to disappear.

Thank G-d, with Obama, we have someone who is so stupid that he would actually let his intentions be know before the election.

Now is the time for Israelis to vote in the most anti-Arab administration in history.

Now is the time for all those Jews who supported Obama to start calling and reminding him that the piggy bank is closed.

Now is the time for anyone looking to be re-elected or elected to Congress to start fund raising, and let's not pussy-foot around. Let's let them know that they are not getting one penny of Jewish money unless Israel is protected from these terrorist war-mongers that call themselves "moderate."

Now is the time.

Good luck, Hillary! You are in for a wild ride--but if you play your cards right, you will be the next president.

JERUSALEM – The Palestinian Authority received a guarantee from President Obama's administration that understandings reached with Israel during U.S.-backed negotiations while President Bush was in office would be utilized as starting points for current and future talks with the Jewish state, top PA officials told WND.

With new general Israeli elections scheduled for next week, the move could limit the incoming Israeli prime minister, since the PA can point to points of agreement during previous talks between Bush and Prime Minister Ehud Olmert.

The PA officials, speaking on condition their names be withheld, said they were enthusiastic about the new tone of the White House and about recent meetings with Obama's Mideast envoy, former Democratic Sen. George Mitchell. They said they believe that under Obama the Palestinians can extract from Israel concessions reaching "much further" than during talks held under the previous administration.

"Regarding all understandings achieved between the parties, the Obama administration told us they will give guarantees to carry them out," said a top PA official.

"With Obama, the number of settlers to be removed from the West Bank will much be more important than 60,000," said the PA official, referring to previous negotiations in which Israel expressed a willingness to withdraw from up to 94 percent of the West Bank and move about 60,000 settlers into central settlement blocks closer to Jerusalem.

WND reported exclusively in November that then-Secretary of State Condoleezza Rice collected notes and documents from Israeli and Palestinian negotiating teams to ensure the incoming U.S. administration would not need to start negotiations from scratch. PA sources said Rice's notes are being used by Obama's team as the starting points for new Israeli-Palestinian talks.

Documents noting agreements during previous Israeli-Palestinian negotiations have been used in subsequent talks, sometimes as starting points. According to both Israeli and PA sources, American officials took detailed notes of talks at U.S.-brokered negotiations at Camp David in 2000 and then used points of agreement on key issues, such as borders, during recent rounds of intense Israeli-Palestinian talks.

Israeli and PA sources said Rice's notes document agreements that would seek an eventual major West Bank withdrawal and would grant the PA permission to open official institutions in Jerusalem.

A top source said the PA requested that the Obama administration threaten sanctions against Israel for any new Jewish construction in the West Bank.

The source told WND that Obama is said to favor Israel withdrawing from nearly the entire West Bank.

Israel recaptured the West Bank in the 1967 Six Day War. The territory, in which about 200,000 Jews live, is tied to Judaism throughout the Torah and is often referred to as the biblical heartland of Israel.

Rate This Article!
Posted by Unknown at 6:31 AM