The Talmud Comics and the Artist, Yonah (Medbh) Lavery 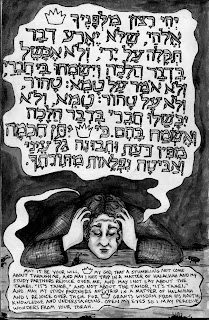 I was reading one of my favorite blogs this morning--Failed Messiah--and he had posted a Talmud comic on the blogsite.

I have to tell you, the comic was so arresting, so beautiful, so incredibly conceived that I had to know more. I went to the website of Yonah (Medbh) Lavery, a Toronto artist, to find out more about the Talmud Comics and this amazing artist.

On the website of the Talmud Comics, I found an amazing collection of Talmudic passages, written in English, and taken from the the Soncino 1967 translation with some really wonderful illustrations that make the book come alive (especially, I am hoping, for my young sons!).

There is a great section entitled "About Talmud Comics," where she introduces the ways in which she created the comics, he relationship to studying Talmud, and other interesting facts about the page.

She even has a "who's who" on the website for sages who make cameo appearances in Talmud passages and why she represented them as she did. I am hoping that my readers will take a look at her work and the genius behind it and take a few moments to understand the amount of work and love of Torah this woman must have to make such a beautiful contribution to study for anyone who might be lucky enough to find her rather obscure website (By the way, the comics took quite a while to open on my ultra-new, ultra-fast computer--so please be patient. The wait is worth it!).

I am hoping some enterprising publisher might see what she has created and suggest the publication of her works in a collected book. I would love to purchase such a book for my children, and I wonder that a few Jewish schools wouldn't also be interested in purchasing such books for their Judaics classes and libraries.

Thank you, Yona, where ever you are!

I hope you see my post, and I hope you know you have an instant fan! May Hashm bless your hands, your eyes, and your heart and enable you to continue in the amazing work that you do!

Talmud Comics are updated about once every two weeks, usually on Wednesdays or Thursdays, and mostly use the Soncino 1967 translation (with fairly frequent wording changes based on personal translation preference or those suggested by other editions). They're non-halakhic - that is, obviously nobody should be reading them to get a sense of what Jewish law thinks about anything. I guess they're midrashic - stories and imaginings about the wonderful, fascinating people (and discussions) populating the Talmud.

They're also highly anachronistic. Not only is everybody dressed in a nebulously modern style, the relative ages of the rabbis are sometimes skewed beyond belief. 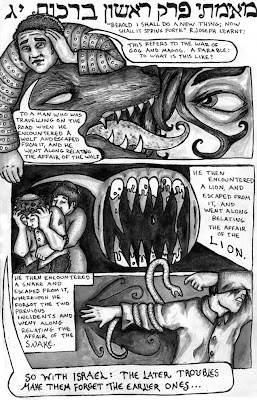 Why? Because the Talmud itself provides this sort of magical space where people think and argue across time and geography; readers can see teachings come into conversation with each other although the teachers themselves may have lived in different eras. There is no before and after in Torah, after all. The comics tend to be set in an occupation era, the destruction of the Temple leaning in history forwards

Some of my gentile friends have wondered what Talmud even is, and/or still don't get what this comic is doing. For them and anybody interested, this should be a more

There's also a new Talmud Comics Who's Who guide up, explaining the ways different sages are presented. 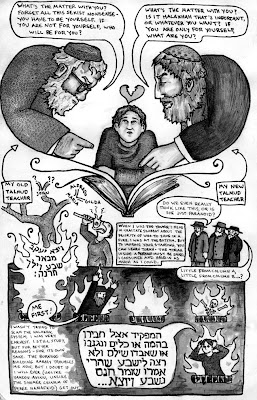 Yonah (Medbh) Lavery lives in Toronto. After finishing about 60 or 70 pages of Berachot, she wants to make a comic out of Jastrow's Dictionary of the Targumim, Talmud Babli, Talmud Yerushalmi and Midrashic Literature. And maybe Sanhedrin or something. Wait, here's an idea: Josef Karo Komics, complete with cute sidekick Maggid. Or maybe she should quit while she's ahead.