Gazans Tell How Hamas Used Them As Human Shields 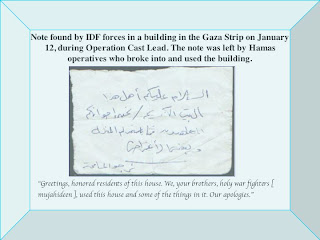 There's a new report out, today, that says that the UNRWA never checks to see if their staff are members of terrorist organizations before they hire them. They don't check on these people at all--yet the news media, during the Gaza war, took the words of the UNRWA staffers as TRUTH.

In this analysis, the Intelligence and Terrorism Information Center at the IICC analyzes various newspaper articles written from interviews with people who live in Gaza and who spoke about what happened there during the Gaza war.

We know there was a lot more fiction coming out of Gaza and being fed to reporters in the West than those reporters are willing to admit. For example, the UN finally "clarified" the fact that the UN school had NEVER been bombed by the IDF, that the numbers of dead, especially the number of "civilian" (i.e. not terrorists) deaths were greatly exaggerated, and that Hamas had clearly used homes, farms, mosques, and schools to shoot rockets, mortars, and grenades at the IDF.

These first-person accounts clearly state that Hamas cynically used innocent civilians and that they, not the Israelis, should be put before a war-crimes tribunal.

Israel did all they could to limit civilian deaths. They dropped pamphlets, they made phone calls, they texted, they went door to door--warning people of impending air strikes and tank fire.

No other military organization in the history of war has done so much--but they are still accused of "war crimes" by the Islamofacists and their puppets, who can't stop parroting the lies.

M
-----
Gazans Tell How Hamas Used Them As Human Shields: Among others, an ambulance driver said that during Operation Cast Lead Hamas operatives used ambulances to leave battle sites, a tactic familiar from the past
Intelligence and Terrorism Information Center at the Israel Intelligence Heritage
& Commemoration Center (IICC)
http://www.terrorism-info.org.il/malam_multimedia/English/eng_n/html/hamas_e052.htm
January 28, 2009


Overview
Hamas's tactics of using civilians as human shields and of exploiting public institutions and ambulances for military purposes were exposed several times during and after Operation Cast Lead.

The Palestinian and Arab media's conspiracy of silence resulted in the facts being revealed by Western correspondents who entered the Gaza Strip and talked to local residents. The Palestinian media in the Gaza Strip and the Arab media in general made almost no reference to the basic issue. The following are the main points of three articles which appeared in Western newspapers:

A correspondent for Australia 's Sydney Morning Herald interviewed a Gazan ambulance driver, who described how Hamas operatives tried to force him to use his ambulance to evacuate them from a battle zone.

A correspondent for the New York Times quoted a source close to Hamas, who described rocket fire from proximity to residential buildings and in alleys.

A correspondent for Italy 's Corriere della Sera talked to Gazans about rocket fire from the roofs of private houses and about Hamas operatives who sought shelter in a hospital.

The Sydney Morning Herald
In an article which appeared on January 26, the paper's correspondent in the Gaza Strip, interviewed Muhammad Shriteh , an ambulance driver who evacuated wounded Palestinians from the battle zones.

Muhammad Shriteh said that during most of Operation Cast Lead he would “co-ordinate with the Israelis before we pick up patients… so they would not shoot at us.” He said that the more immediate threat was from Hamas, who would “ would lure the ambulances into the heart of a battle to transport fighters to safety .”

He also said that one night, after the first week of fighting, “there was a call for a house in Jabaliya .” Because of the urgency of the call, he said, there was no time to arrange his movements with the IDF. Nevertheless, he knew the Israelis were watching him because “I could see the red laser beam on the ambulance and on me.”

Shriteh said that when he entered the house in Jabaliya he saw three Hamas operatives who had taken cover inside, and that half of the building had already been destroyed. “They were very scared, and very nervous,” he said. “They dropped their weapons and ordered me to get them out, to put them in the ambulance and take them away.” He refused because, he said, he knew that if the IDF saw him, he would not be able to pick up any more wounded people. One of the Hamas operatives, he said, put a gun to his head but he still refused, and then they allowed him to leave.

He added that during Operation Cast Lead, Hamas operatives made several attempts to hijack the Al-Quds Hospital's [located in the Tel al-Hawa neighborhood in Gaza City ] fleet of ambulances . He also said that “You hear when they are coming. People ring to tell you. So we had to get in all the ambulances and make the illusion of an emergency and only come back when they had gone.”

In the past, Hamas and the other terrorist organizations used the tactic of exploiting ambulances for military purposes. For example, on May 24, 2004 , Israel 's Channel 10 TV broadcast a video tape photographed by Reuters. It showed two ambulances arriving at the site of an exchange of fire between the IDF and terrorist operatives during an IDF action in the Gaza Strip. One of the ambulances can clearly be seen as marked with a red cross and “UN,” and as flying a UN flag. The ambulances, which belonged to UNRWA, evacuated two terrorist operatives wearing uniforms and accompanying a wounded operative, who was armed and also in uniform. Two other armed operatives (one masked), apparently unconnected to the wounded man, could also be seen getting into ambulance after them, using it to escape. 1

Ambulances and vehicles belonging to international organizations are used during fighting to evade being examined and to exploit the freedom of movement the IDF gives such vehicles. Armed Hamas operatives use them to leave battle zones, moving to wherever the wounded are taken. In addition, during Operation Cast Lead, terrorists hid in hospitals and operated from within them, correctly assuming that the Israeli security forces would not enter medical institutions and would abstain from attacking hospitals.

The New York Times
On January 18, immediately after Israel announced it was holding its fire, the New York Times published an article entitled “Parsing Gains of the Gaza War.” It quoted an anonymous source close to Hamas who said that this time, Hamas had fought differently from the past. He said that “this time it was different. They have more experience and they have training from Syria and Iran . They helped them rethink their strategy.”

The man quoted said that Hamas had changed its tactics: “They fired rockets in between the houses and covered the alleys with sheets so they could set the rockets up in five minutes without the planes seeing them. The moment they fired, they escaped.”

Corriere dell Sera
On January 22 the Italian daily Corriere della Sera published an article by Lorenzo Cremonesi whose headline and subhead read “The boys of Hamas used us like targets” and “Gazan residents accuse the Islamic militants: they prevented us from leaving the house and shot from there [inside the houses].” (“ Così i ragazzini di Hamas ci hanno utilizzato come bersagli ,” and “ Abitanti di Gaza accusano i militanti islamici: ‘Ci impedivano di lasciare le case e da lì sparavano.'” ) A Gazan woman was interviewed and said that practically all of the tallest buildings in Gaza had been struck by Israeli bombs, and that they had rocket launchers on the roof or else were being used by Hamas as observation points . She also said that they even set some up close to the large UN depot that later went up in flames. In addition, according to the article, when the Gazans barricaded themselves inside their houses to keep Hamas operatives out, the operatives would use force to beat down the doors and windows .

A Palestinian living close to the Al-Quds hospital said that during the operation, the militiamen sought shelter in the administration buildings, and that they used the ambulances and forced the drivers and nurses to take off their uniforms with their paramedic badges so that they would not be targeted by Israel snipers.

For further information see our January 2009 Bulletin entitled “Hamas Exploitation of Civilians as Human Shields” at
http://www.terrorism-info.org.il/malam_multimedia/English/eng_/pdf/hamas_e028.pdf .
Posted by Unknown at 8:26 AM